Between a rock and a hard place: Mongolia’s ambivalent relations with China

Sandwiched between Russia to the north and China to the south, landlocked Mongolia has always had tough choices to make in its foreign policy strategies. Towards China, which it used to be a part of and continues to share kinship ties with the autonomous region of Inner Mongolia, it harbours historical suspicion. But with China being its top export destination and key investment partner, the head may rule the heart. 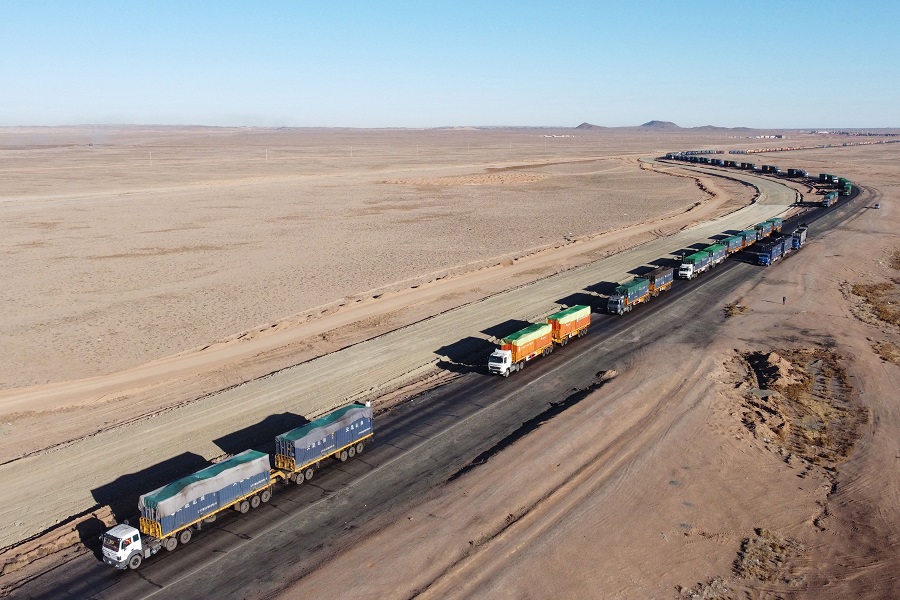 This aerial picture taken on 16 October 2021 shows trucks loaded with coal waiting near Gants Mod port at the Chinese border with Gashuun Sukhait, in Umnugovi province, in Mongolia. (Uugansukh Byamba/AFP)

Grace Chong - 25 January 2023
With rumblings of US House Speaker Kevin McCarthy possibly visiting Taiwan in spring, Yang Danxu observes that this will not be the last we see of the “Taiwan card” being played by US politicians as they move into the second half of the current US presidency.
Read more
Translated by Grace Chong on 16 November 2021

It is hard to find a country with a more complex and challenging geostrategic situation than Mongolia. The expression “stuck between a rock and a hard place” is most appropriate to describe Mongolia’s predicament.

Sandwiched between Russia to the north and China to the south, landlocked Mongolia is one of the most isolated places on earth. With a land area three times the size of France and a population of a mere 3.3 million, it is no wonder that Mongolia’s leaders look with a mix of fear and fascination at their large neighbour to the south. Over 92% of Mongolia’s exports go to China and around 70% of its imports come from China or via its territory. Mongolia’s well-being is highly dependent on China.

Exchanges between the Chinese and the Mongols make up one of the oldest contacts between civilisations in recorded human history dating back thousands of years. Sino-Mongol relations are a story of trade, intermarriage, cooperation and conflict, conquest, and assimilation. For centuries Mongol tribes raided and traded with China and between 1271-1368, the Mongols conquered and ruled the Middle Kingdom by founding the Yuan dynasty. Mongols are proud of this fact to this very day.

Between 1636-1911, Mongolia was part of the Chinese Qing Empire. With Soviet help and taking advantage of the turmoil of the warlord era in China, Mongolia was able to gain its independence from China. In 1924, it became the Mongolian People’s Republic. Following the establishment of the People's Republic of China (PRC) in 1949, Mao Zedong, desperate for Soviet assistance, grudgingly recognised Mongolia as an independent country.

Throughout the Cold War, Mongolia remained a Soviet client and hosted Soviet military bases. As tensions between Moscow and Beijing led to a border war in 1969, Mongolia braced itself for a possible Chinese invasion. As an ally of the Soviet Union, Mongolia, like other communist states, suffered under the scarcity and poverty of a centrally planned economy. However, it was not absorbed by China. As such to this very day, Russia is seen as an important balancer to China and a lesser evil.

In the past decade, Mongolia has witnessed significant economic growth due to the expansion of its mining sector. Mongolia’s large and sparsely populated land is rich in natural resources.

The price of prosperity

With the end of the Cold War, relations between China and Mongolia saw a steady improvement. Trade between the two countries surged. As China’s economy grew at an impressive rate, its thirst for raw materials increased.

Until the early years of the current century, Mongolia’s economy was primarily based on sheep herding and agriculture. In the past decade, Mongolia has witnessed significant economic growth due to the expansion of its mining sector. Mongolia’s large and sparsely populated land is rich in natural resources. The country possesses significant deposits of copper, coal, gold, uranium and several other minerals.

Since the early 1990s, China has been the largest foreign investor in Mongolia and its biggest trading partner. In 2009 alone China invested US$2.3 billion in the country, mostly in the mining sector. In 2011, Mongolia’s GDP grew by 17.5%, the second fastest growing economy in the world. Between 2009 and 2019, the country’s GDP grew threefold, from U$4.58 billion to US$13.99 billion. The mining sector accounted for most of this growth.

Mongolia’s newfound wealth allowed it to modernise its decrepit Soviet-era infrastructure and invest more in its health and education sectors. However, mining exports to China are the main source of Mongolia’s newfound prosperity. Without the Chinese market, Mongolia would remain trapped in poverty. Without Chinese capital and technology, Mongolia’s vast mineral wealth would have remained buried underground.

Mongolia is not just dependent on China’s market, capital and technology. Perhaps more importantly, it depends on China for access to the sea. Landlocked Mongolia needs access to ports in Northeast China to reach the international market.

Since 1991 China has allowed Mongolia access to the Chinese port of Tianjin where most of Mongolia’s exports that do not end up in China are shipped to the world. In theory, Mongolia could use the Russian Far East port of Vladivostok. However, this port is of a much further distance than Tianjin and the infrastructure that links Mongolia to Vladivostok is rather primitive. Mongolia’s current and future prosperity depends on good relations with Beijing.

Any country would be extremely concerned with the level of dependence Mongolia’s economy has on China. For a nation that fought for centuries to retain its independence from China, the current situation generates extreme anxiety among Mongolians, both within the elite and the common people.

Despite having very few options to counter the rising dominance from their giant neighbour to the south. Mongolian leaders have shown that they have not forgotten the age-old diplomatic traditions of their nomadic ancestors. To counter the power of strong Chinese emperors, Mongol leaders formed alliances with rival powers or Chinese dissidents.

Ulaanbaatar has sought with some success to attract Japanese, South Korean, Australian and Canadian investments into its mining sector as a way to reduce its dependence on Chinese capital.

To counter China, present-day Mongolian leaders have actively sought to strengthen relations with outside powers, in what is known as a third neighbour policy. Ulaanbaatar has sought with some success to attract Japanese, South Korean, Australian and Canadian investments into its mining sector as a way to reduce its dependence on Chinese capital. Mongolia has energetically sought closer economic and security ties with the US, including by deploying a small contingent of troops to Iraq and Afghanistan.

The current Mongolian elite is primarily educated in the US and Europe. The country’s current prime minister is a Harvard graduate and two thirds of Mongolia’s Members of Parliament are alumni of American universities.

If the ancient nomadic Mongols had a totally different culture and political system from the sophisticated settled Chinese empire, present-day Mongolia and China remain remarkably different. Since the early 1990s, Mongolia has remained a democracy with one of the freest media in the region.

Many in Mongolia believe that Beijing’s ultimate aim is to incorporate Mongolia into China. More ethnic Mongols live in the Chinese province of Inner Mongolia than in Mongolia itself. Recent allegations that China was trying to suppress the cultural identity of its Mongolian populations exacerbates these fears.

However, one cannot choose one’s neighbours. The hearts and minds of the Mongolians may be with the West, but their pockets are with China.

Despite overwhelming odds, Mongolia has managed to diversify its political and diplomatic relations. It has preserved its sovereignty and culture. However, there are limits to what its diplomacy can achieve. The tyranny of geography dictates that Mongolia’s well-being is tied to that of China’s. Closer political and economic ties with the US, Japan, Russia, South Korea and other countries can mitigate Mongolia’s dependence on China. However, no matter how willing these countries may be, they simply cannot replace Chinese markets and ports.

As a Mongolian ambassador told the author: “When US businessmen or government officials fly to Ulaanbaatar, they fly over Chinese or Russian air space. Russia and China are not friends of America.” Mongolia has many reasons to be proud of itself. The living standards of its people have improved rapidly in the past decade. Its culture and language have flourished and its democracy consolidated. However, one cannot choose one’s neighbours. The hearts and minds of the Mongolians may be with the West, but their pockets are with China.

Related: Wary of Sino-Russian influence, Mongolia seeks better ties with the US | Inner Mongolia's new language policy: Will it endanger Mongolian culture and language? | Extension of China-Russia friendship treaty does not mean ties are solid