In the aftermath of the US$2.8 billion fine imposed on Alibaba, Xu Le reflects that for Alibaba, this is no big shakes as the amount makes up only a small percentage of its revenue. However, in the larger scheme of things, industry players will be saying goodbye to unregulated days of wild growth. They too will have to grit their teeth and get ready for fiercer domestic competition amid a harsh external environment. Will this mean a slowdown in China's tech and internet sectors? 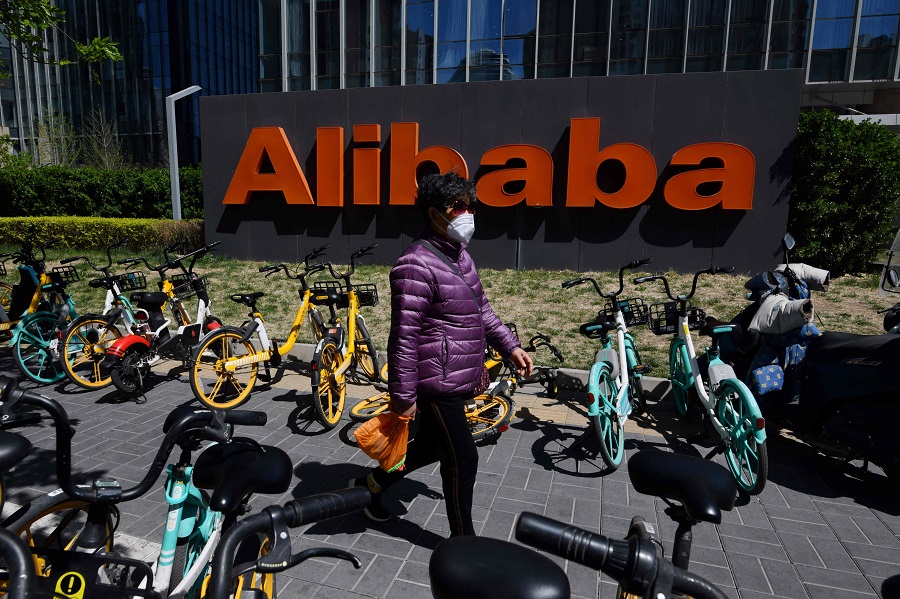 A woman walks past an Alibaba sign outside the company's office in Beijing, China, on 13 April 2021. (Greg Baker/AFP)

Grace Chong - 30 January 2023
Amid ongoing tensions, a high-level visit by US Secretary of State Antony Blinken to China in the coming week shows hope for improved relations between the two economic powerhouses. Zaobao correspondent Yu Zeyuan notes that while the meeting may not produce practical results, it is a much needed exchange to manage and control China-US relations from worsening.
Read more
Translated by Grace Chong on 16 April 2021

The Alibaba Group received a record US$2.8 billion fine from China’s anti-monopoly regulator, China’s State Administration for Market Regulation (SAMR), on 10 April as a result of an anti-monopoly investigation. The tech giant said it accepted the penalty “with sincerity”. This indicates that the anti-monopoly probe into the group, which started from December 2020, has drawn to a close.

Alibaba CEO Daniel Zhang said they would introduce new measures to lower barriers to entry and take actions to gradually reduce merchants’ operational costs on their platforms, ensuring the fairness of trading and competition and promoting the sound development of internet platform economies.

...the antitrust case is a warning to major Chinese internet firms such as Pinduoduo, JD, Kuaishou Technology and Tencent.

Meanwhile, Alibaba’s stock price experienced a rally and shot up more than 9% two days after the fine announcement, achieving the biggest one-day gain in four years. Morgan Stanley mentioned that the fine lifted a major overhang on the group and shifted the market’s attention back to fundamentals.

While the US$2.8 billion fine is the largest fine meted out by China’s regulators, it is worth only 4% of Alibaba’s domestic revenue in 2019. It is not expected to have any material impact on its business.

However, the antitrust case is a warning to major Chinese internet firms such as Pinduoduo, JD, Kuaishou Technology and Tencent. Those that fail to address misconduct will be “severely” punished”, the SAMR said.

In addition to domestic regulations, China’s tech companies will have to face relentless sanctions from the US. Some Chinese tech companies have been blacklisted in the latest escalation between the world’s two top economies. Will these combinations of factors lead to a slowdown in China's tech and internet sectors?

Over the past two decades, Chinese tech companies, such as Alibaba and Tencent, have grown up to multi-billion dollar empires. Alibaba has diversified its core e-commerce business into the healthcare, e-payment, entertainment, and cloud computing areas. Tencent, which is known for WeChat, is the world’s largest video game company in terms of revenue.

Furthermore, the tech titans have extensively invested in Chinese and overseas startups, such as those in the fields of social media, entertainment and electric vehicles. With their business expansion, the market powers of these companies have become larger, influencing every aspect of Chinese life.

They started squeezing out rivals by asking merchants to “choose one out of two”, which means online merchants can pick only one platform as their exclusive distribution channel. This long-term practice of abusing market power has drawn the Chinese government’s attention.

China tech companies will have to develop their business models under strict government control.

Considering the potential of the tech giants in abusing customers’ personal data and privacy as technology services continue to expand, the government took action to rein in their powers. Along with the published draft version of the Personal Information Protection Law (PIPL), new anti-monopoly guidelines were released in February, putting new pressure on China’s tech giants.

Besides meting out the fine to Alibaba, regulators summoned 34 companies, including Pinduoduo, JD, Kuaishou, Bilibili and Didi on 13 April to conduct a “comprehensive self-inspection” within a month. This undoubtedly signals that the days of tech companies “growing up in the wild” are gone.

China tech companies will have to develop their business models under strict government control. Their compliance costs, which include expenses to adhere to government regulations, will be much higher than before, slowing down the speed of their business expansion.

Even before the anti-monopoly probe into Alibaba, the company had to face threats from the rapid growth of other platforms. For example, the fastest growing e-commerce startup in China’s history is Pinduoduo, which has hundreds of millions of monthly users, a figure only second to Alibaba’s.

Now, the removal of the “choose one out of two” practice is going to accelerate competition among the e-commerce companies. This intensive competition is going to lower their profit margin. On one hand, they will compete for merchants by lowering their service charge. On the other hand, they need to improve their service quality to ensure a fair business environment. Therefore, companies’ profit margins are not expected to increase exponentially as they did before.

Recently, Global Times reported that the Bureau of Industry and Security (BIS), an agency of the US Department of Commerce, has added seven Chinese supercomputing firms to the sanctions list for conducting alleged activities that are contrary to the US national security or foreign policy interests.

Fortunately, Alibaba, Baidu and Tencent have been spared from the US investor blacklist in January. But more Chinese multinational firms, such as China Telecom, China Mobile and smartphone maker Huawei have been barred from American investment because they are “owned or controlled by the Chinese military”.

Investors’ confidence has been shaken. Some investors are worried that any change in US policy will trigger widespread sell-offs of blacklisted firms. Such policy uncertainty and investors’ concerns will slow down the process of globalisation for many of China’s tech giants.

“The conclusion of investigation and Alibaba’s decision to waive its right to appeal, or hold a public hearing, suggest that the company wanted to move forward to rebuilding business operation,” said a team of Citi analysts led by Alicia Yap. But Alibaba is still subject to inquiries from regulators on mergers, acquisitions and strategic investments as part of a review process.

Alibaba, together with other big platform companies, will be facing a huge challenge brought about by the change in policy. The penalty serves to put companies like Alibaba on notice. It demonstrates the Chinese government’s determination to crack down on anti-competitive behaviour, especially among powerful companies.

According to a Reuters report, the government watchdog plans to add about 20 to 30 staff to its current antitrust workforce of about 40 staff. It also plans to delegate some power in monitoring cases to its local bureaux. Chinese firms will have to restructure or even rebuild their business models to ensure long-term stable and continued growth from now on.

Related: Is Alibaba leaving its carefree days behind? | Alibaba probe: China's challenges in dealing with monopolies start with the state-owned enterprises | With Ant Group's record $34.5 billion IPO suspended, what happens next? | Pick a side: China will counter US sanctions with lawsuits