The immediate impact of the Ukraine war on the Chinese economy remains limited except for high commodity prices, assesses economist Alicia García Herrero. But the full impact will depend on the political decisions China makes on the Ukraine war. China seems keen to abide by the letter of the law to comply with Western sanctions on Russia, but not so much in terms of the spirit of the law. By taking risks and helping Russia as much as it is able to, will it get caught in the crossfire between the West and Russia? 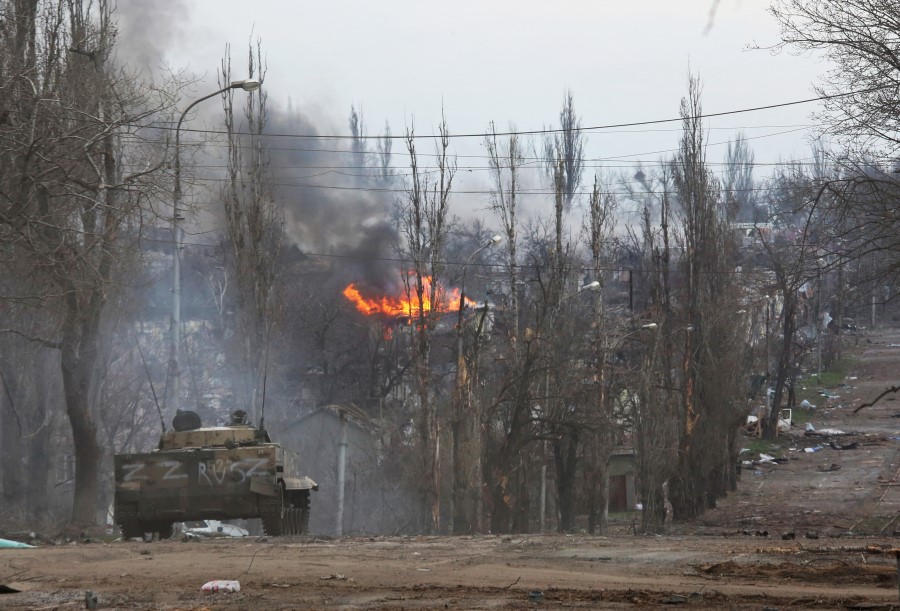 An armoured vehicle of pro-Russian troops is seen in the street during Ukraine-Russia conflict in the southern port city of Mariupol, Ukraine, 11 April 2022. (Chingis Kondarov/Reuters)

Candice Chan - 20 June 2022
The Fujian, China’s third aircraft carrier, was launched on 17 June. The highlight is the electromagnetic catapult system for launching aircraft, which could put it on par with much of the US’s cutting-edge technology in the field. Zaobao correspondent Yu Zeyuan takes a closer look at the implications of this development.
Read more
Translated by Candice Chan on 12 April 2022

The war in Ukraine and the unprecedented sanctions imposed on Russia by Western allies as a response to Russia’s invasion are certainly going to have a negative impact on the global economy well beyond Russia and Ukraine.

First and foremost, the European economy will be hit hard due not only to its dependence on Russian energy but also to the huge inflow of refugees that the continent is absorbing. The direct impact on the Chinese economy is set to be much more muted although still clearly negative, at least in the short run. The huge jump in energy prices globally stemming from the war in Ukraine is bad news for China given its dependence on energy imports.

Beyond the increase in energy prices, the other immediate downward pressure on the Chinese economy are Western sanctions imposed on Russia.

But added to that is the fact that meeting China’s carbon reduction goals set within the current Five-Year Plan would require additional imports of gas as a way to transition away from coal. Notably, one of the outcomes of China’s recent Two Sessions in early March was to put on hold annual carbon emission targets, i.e. by not setting an annual energy intensity target for 2022, while keeping the overall 2025 targets. This is a way for the Chinese government to gain some flexibility in times of very high energy prices due to the Ukraine war.

Beyond the increase in energy prices, the other immediate downward pressure on the Chinese economy is the Western sanctions imposed on Russia. In fact, Chinese corporations and financial institutions will need to be very careful when trading with or investing in Russia. This is exactly what seems to be happening as Chinese banks are no longer offering letters of credit for trade with Russia, and Chinese energy companies, namely Sinopec, are putting aside their projects with their Russian counterparts.

Still, the impact of such retrenchment from Russia should be quite moderate for China since Russia’s economy is about ten times smaller. In addition, China does not even need to fully cut its ties with Russia but just avoid hard currency payments and some targeted entities such as the Russian central bank and the Ministry of Finance. As for commercial payments, the fact that several large banks are still allowed to use the SWIFT financial network makes it clear that the sanctions are not tight enough for China to have to stop all economic relations with Russia.

China will use any space available to support the Russian economy, as long as it does not hurt too much, for the simple reason that it is in China’s interest.

While the direct impact of Ukraine’s war on China seems rather limited, the key to better gauge the actual extent of the impact is China’s true position in this conflict. On the one hand, China’s rhetoric is firmly anti-US and anti-NATO while quite accommodating to Russia. Apart from holding the US responsible for the conflict, China has repeatedly opposed Western sanctions against Russia.

Such language, though, runs counter to the actual decisions taken by Chinese financial institutions and companies, which confirm China’s actual adherence to Western sanctions. This means that China will abide, even if reluctantly, to the letter of the law, but not necessarily to the spirit of the law. China will use any space available to support the Russian economy, as long as it does not hurt too much, for the simple reason that it is in China’s interest. Energy security, military cooperation and playing a role in the Arctic are among the many reasons which explain such interest.

Russia can count on stepping up trade with China to mitigate the impact of Western sanctions on its economy but only if it is ready to accept an increasing relevance of the RMB in the Russian economy.

The spirit is willing but the flesh is weak?

Given China’s interest to support Russia economically and financially, the next question is how much it can do so. Stronger trade ties with China and Western sanctions will likely push Russia to accept, reluctantly, the renminbi (RMB) as a means of payment. According to SWIFT data, Russia’s use of the RMB has increased rapidly in the last few months and RMB deposits in Hong Kong have spiked in the last couple of months. Russia can count on stepping up trade with China to mitigate the impact of Western sanctions on its economy but only if it is ready to accept an increasing relevance of the RMB in the Russian economy.

Beyond the immediate future, there is no doubt that China can leverage its economic size to foster the use of its Cross-Border Interbank Payment System (CIPS) and its currency but there is a limit to how much it can do. Russia will probably not be happy about becoming a part of a RMB-centric world, since the currency remains non-convertible and doing so would cut Russia further off from the rest of the world.

...the war in Ukraine constitutes a negative shock to the Chinese economy but the direct impact remains limited except for that of high commodity prices.

All in all, the war in Ukraine constitutes a negative shock to the Chinese economy but the direct impact remains limited except for that of high commodity prices. The problem is that it is happening at a time when China is hit by a severe Omicron wave on top of a cyclical deceleration and negative market sentiment stemming from a regulatory crackdown.

Finally, China’s stance on the war will also be key to gauging the actual impact on its economy. The fact that China is keen to abide by the letter of the law, in order to comply with sanctions, is helpful. However, in terms of the spirit of the law, China seems willing to take more risks as it sees a benefit in doing so, namely in view of its lasting strategic relations with Russia. This is clearly a razor edge for China as it could be caught in the crossfire, not only of Western sanctions but also potentially negative decisions by Western companies operating in China.