The rural elderly are the guardians of local traditions, says Hisham Youssef, an Egyptian-American architect based in Shanghai. On his travels to the Chinese countryside, he sees aged craftsmen labouring quietly, often with no one to pass their skills on to. Will precious culture and traditions disappear without a trace at this rate? How can this group’s life experiences be best harnessed and passed down and the youth attracted to stay or return to carry on family trades? 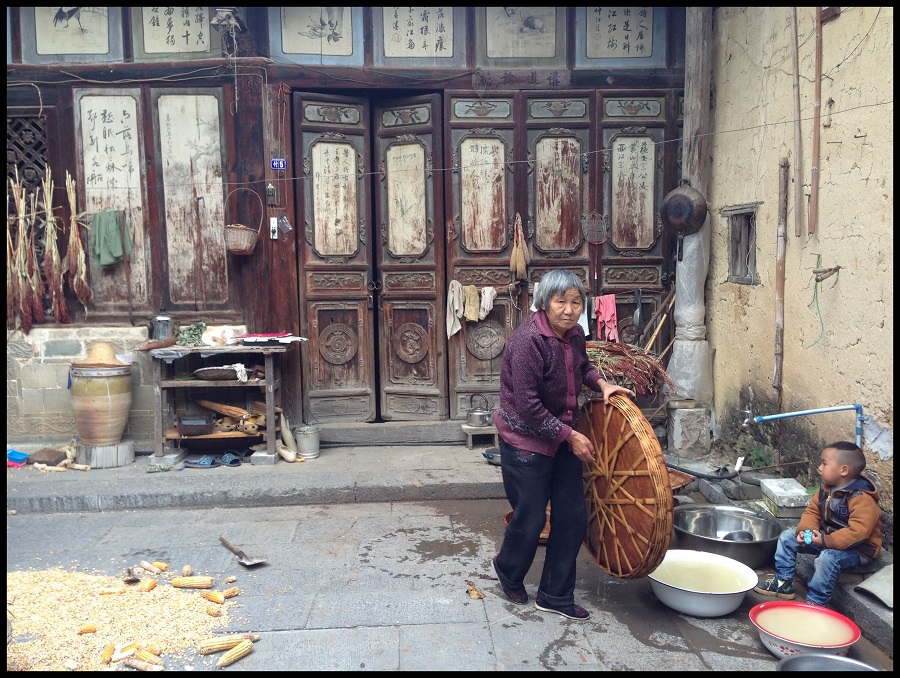 Often in rural China, a couple would travel far to find work in cities, leaving their offspring behind with their grandparents as pictured here in rural Yunnan.

Grace Chong - 25 January 2023
With rumblings of US House Speaker Kevin McCarthy possibly visiting Taiwan in spring, Yang Danxu observes that this will not be the last we see of the “Taiwan card” being played by US politicians as they move into the second half of the current US presidency.
Read more
Translated by Grace Chong on 27 October 2021

As one ventures on the slow and winding back roads through rural areas in China, one often stumbles upon rare and hidden discoveries, as I did one afternoon in the village of Liucun in Lishui’s Songyang county in Zhejiang — this is but one of many examples that await those who take the time to explore.

The village was very quiet and seemed to be without a soul. A beautifully ornate and large mansion, clearly standing for many generations, with many stories to tell, beckoned. The front doors were open. Just behind them sat a woman, quietly observing the stranger as he wandered in.

There were many vats on the floor next to her and on the wall was an old clipping of an interview with her in Chinese online media about her Que (阙) family tradition in brewing mijiu (米酒) — a Chinese rice wine made from glutinous rice. She gladly shared a taste of her traditional family recipe, which was flavourful, sweet and refreshing.

She engaged in conversation explaining that this huge mansion has been in her family for several generations. The house has clearly seen better days. It appeared to be only occupied by three people, but in its heyday likely housed several families.

Going to small villages in the Chinese countryside is to be immersed in traditions that have been carried over from generation to generation for centuries. From making bamboo handicrafts and local delicacies to dancing and fabric dyeing, some are traditions of the larger region, but some more local and only found in a specific village — it is these latter traditions that imbue the various rural areas with their local and unique flavour. And it is not alarmist to say that all or most of this is in danger of disappearing without a trace.

As I have written in a previous article about the risks facing the Chinese rural areas from mass tourism, there is one more topic I would like to urgently point out: China’s rural ageing population. Even if nothing actively physically affects these areas, the ageing rural population, heirs to centuries of tradition, will soon pass and take with them irreplaceable traditions and secrets of their local culture.

How did we get here?

The Chinese central government’s drive to develop the country saw it, among many strategies, urbanising its population by building new cities where hundreds of millions of its population were relocated — the rate is staggering, in 1980 only about 20% of the population lived in cities. In 2021 this is about 64%, and may go to 70% by 2030.

Thanks to these efforts, China has risen to become the world’s second largest economy with major accomplishments on all fronts. What was unforeseen, however, with such massive migration, was the decline of the rural areas. That did not escape the attention of the central government which, in its 13th Five-Year Plan ending in 2020 included incentives to revitalise the rural areas. This may all be good and well, except for one caveat: the rural elderly population.

This is a problem worldwide and not only in China — where the young leave their villages in pursuit of better fortunes in the cities, rarely to return. However, not all countries have the resources that China has and the infrastructure to effect change.

In a nondescript house in a village about an hour’s drive from Hangzhou lies a small workshop that produces beautifully coloured handmade paper umbrellas. This is certainly not your run-of-the-mill mass-produced tourist souvenirs. The small operation of a dozen or so local villagers is run by a young local man. He explained that he returned to the village to continue the production after his father who started the business passed away, because he was proud of the craft and did not want the business, small as it may be, to fade into oblivion. He is a passionate and proud craftsman.

The youth are the torchbearers

While there are similar examples to the umbrella master, it is rare that a young family member chose to return from the city to their ancestral village to continue a family tradition. Indeed a national or regional government strategy cannot hinge on an individual’s desire to return to their home village.

The younger Chinese generation is increasingly curious about their culture and traditions, and, with more disposable income, they tend to travel more in rural areas to explore their country. However, they still prefer to live and work in the cities, understandably, where there are far greater work opportunities.

This is a problem worldwide and not only in China — where the young leave their villages in pursuit of better fortunes in the cities, rarely to return. However, not all countries have the resources that China has and the infrastructure to effect change.

...there is a need to develop a process to document local traditions and customs for posterity.

To address the problem of the imminent passing of the rural elderly and the risk of losing precious knowledge of traditions and culture, I propose a four-step approach, as follows:

First, it is incumbent upon local governments to identify the sources of their local culture at the local village level.

Second, they need to create an environment specifically targeted at engaging the local elderly masters in meaningful ways to preserve and propagate their traditions. The elderly are the keepers of traditions and family customs carried down over many generations, and with their passing, much of a local region’s identity will be lost.

Third and integral to this approach, the local governments need to create opportunities to incentivise the young to stay or return. The younger generations will be indispensable to any sound strategy to keep the local traditions alive in this generational relay.

Fourth, and finally, there is a need to develop a process to document local traditions and customs for posterity.

The proposed approach risks being a double-edged sword: on the one hand, one might succeed in preserving local customs and traditions as intended, but on the other hand, in the process, one might succumb to the financial pressure of being over-commercialised in order to attract tourist traffic to the villages. It is a delicate balance but in any case, this issue needs immediate attention.

Local culture and traditions are the source not only of local, but indeed of national pride, and the very essence of a culture.