Chinese women in the 21st century: Finding happiness and meaning in life

Nothing but Thirty, a Chinese television series that hit the sweet spot among a largely female audience last year, seeks to dispel stereotypes about women. Rather than having to fulfil all her obligations by 30, a woman is just embarking on her life’s adventure. How freeing, this thought. However, in a society trapped by deep-seated expectations of women as a wife and mother, such dramas provide but a moment’s respite from the perpetual stereotypes of being a woman in China. 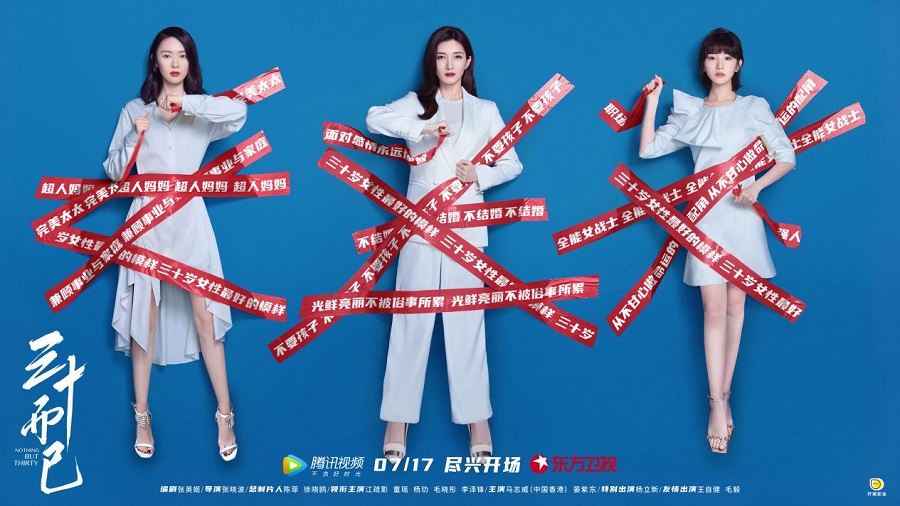 A Nothing but Thirty poster depicting labels plastered on the three female protagonists. (Internet)

Grace Chong - 5 December 2022
Through the eyes of her cat Pudding, Beijinger Lorna Wei gives a snapshot of her daily life when her residential building went under lockdown last week.
Read more
Translated by Grace Chong on 13 January 2021

In July 2020, a Chinese television drama series Nothing but Thirty (《三十而已》, literally "One's Just Thirty") won fans among a female audience in mainland China. Nothing but Thirty depicts the lives of three women in Shanghai: Wang Manni, Gu Jia and Zhong Xiaoqin.

Wang Manni tries to find her Mr Right but eventually chooses to study abroad alone. Gu Jia, the ideal wife, suffers a blow when her husband cheats on her but starts her own tea business despite many difficulties. The obedient girl Zhong Xiaoqin finally finds the secret to a happy marriage — being independent.

The catchphrase “leftover women” (剩女) also reminds women to get married before 25.

Nothing but Thirty celebrates so-called middle-aged women and brings out their charms. Thirty is a crucial age in the Chinese context. Most Chinese believe in the Confucian saying that “a man should be independent at the age of thirty” (三十而立) and interpret this unspoken golden rule according to gender. Men should have a decent career by the time they are in their thirties, while for women, marriage and motherhood are their ultimate accomplishments.

The age of thirty is also associated with women’s beauty and fertility. The prevailing consensus that “a man in his forties is a like a blooming flower, but a woman in her thirties is like bean residue” (男人四十一枝花，女人三十豆腐渣) always puts pressure on women to marry and give birth early before their beauty fades and their fertility declines after thirty. The catchphrase “leftover women” (剩女) also reminds women to get married before 25. There must be black magic in the world that turns a woman from a human being into nothing at her thirtieth birthday if she has not become a wife or a mother as she blows out the birthday candles.

The producers of Nothing but Thirty do not believe in this kind of witchcraft. At the end of the series, the single lady Wang Manni, the single mother Gu Jia, and the remarried Zhong Xiaoqin all have happy endings. However, the celebration of women’s diverse choices in life seems to be teaching the female audience not to get married in the first place. One of my students, Linda, felt extremely disappointed after watching Nothing but Thirty. She said, “If a perfect woman like Gu Jia cannot have a happy marriage, why should I spare no effort to get married?”

Linda’s question made me reevaluate Nothing but Thirty. Actually, the main heroine Wang Manni was overshadowed by the supporting character Gu Jia. The latter was an ideal woman in every way, and yet her husband still had an affair. Understandably, Gu Jia gained the audience’s sympathy. Previous clichéd love affairs always depicted the housewife as boring and unattractive — they were usually naggy, ignorant, paranoid, and often shooed away any young lady seeming to approach their husbands. Contrary to this stereotype, Gu Jia was the embodiment of a new age housewife. A graduate of a renowned university, she helped her husband to set up a firework company and dealt with various challenging tasks. In all aspects, she was an independent housewife that her family relied on.

But when these positive attributes are prefaced by the word “too”, they become a negative — Gu Jia is too beautiful, too smart, and too well-organised.

Gu Jia also made different decisions from most professional women. Having struggled to balance career and the family, Gu Jia made the seemingly wise decision of devoting herself to her family and was always considerate about “saving her husband’s face”. She willingly took a step back to be an invisible partner and let her husband play a central role in the company. Gu Jia is what some would call a “superwoman”.

Superwoman to the rescue

A superwoman is the perfect combination of the traditional virtuous woman and the modern independent woman. A superwoman is supposed to take charge of both domestic and public affairs. And most importantly, she should respect, love, and support her husband under any circumstances. Having her life revolve around a man becomes tricky in the context of a superwoman. A woman does all the work for the recognition of her husband or family, and a superwoman should never let her husband feel inferior in any way. A wife can be beautiful, smart, and well-organised. But when these positive attributes are prefaced by the word “too”, they become a negative — Gu Jia is too beautiful, too smart, and too well-organised. Her husband eventually found her too stifling, too perfect, too controlling. For instance, the mistress in the story accused Gu Jia of forbidding her husband to have dinner, although Gu Jia only did this out of concern for her husband’s health and skipped dinner as well to accompany him.

It is no wonder that a fear of marriage is gradually creeping into young women’s minds in China as they have watched too many tragedies on television.

Women-blaming is always a given in marriage. Neither the naggy, unattractive old-fashioned housewife nor the independent and devoted new age housewife Gu Jia can escape the fate of being cheated on, hurt and blamed. It is no wonder that a fear of marriage is gradually creeping into young women’s minds in China as they have watched too many tragedies on television. They are puzzled because they do not know how to have a happy marriage. If a perfect wife like Gu Jia cannot save her marriage, how can an ordinary young woman? I can understand my student’s anxiety. When the whole society pushes you to be a good wife and devoted mother like Gu Jia, you still cannot have a happy life because you are too good and too devoted.

Being a woman has too many connotations in the Chinese context, but few are about women’s free will.

Though the producer of Nothing but Thirty tried to shake off the traditional expectations of women through changing “a man should be independent at the age of thirty” (三十而立) to “One’s Just Thirty” (三十而已), many Chinese women are wondering how to have this “just” attitude without suffering any stigma in reality. As the famous talk show host Yang Li said, she only felt free when she was undergoing surgery because the male doctor simply treated her as he would a man to be saved, instead of a woman to be admired. Being a woman has too many connotations in the Chinese context, but few are about women’s free will. Marriage or motherhood should not be a woman’s ultimate accomplishments just as men are not born to be husbands or fathers. It is just a choice, not an obligation.