Cultural historian: Fish as large as submarines in Hangzhou?

20 May 2022
By Cheng Pei-kai
Cultural Historian

On a walk in the deserted Lingfeng Temple near Yuquan Botanical Garden in Hangzhou, cultural historian Cheng Pei-kai muses that peace and quiet is a blessing but a kiss of death for small teahouses trying to make a living. Also, memories of days gone by may be blurry over time. Either that or things have really changed, and one must face the sad reality that the good old days can never be brought back. 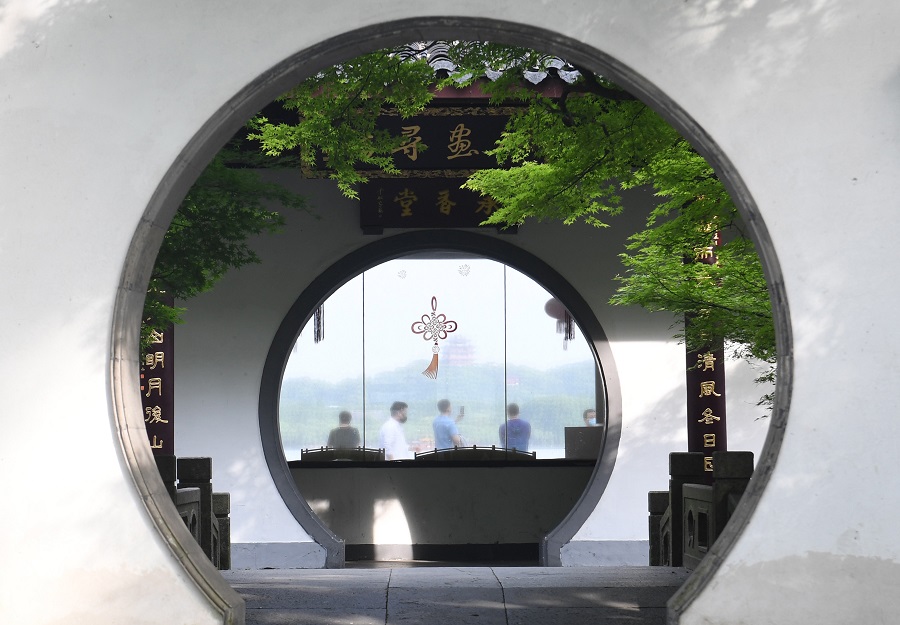 People tour the Autumn Moon on a Quiet Lake (平湖秋月), known as one of the “ten scenes of West Lake”, in Hangzhou, Zhejiang province, China, 2 May 2022. (CNS)

Grace Chong - 21 June 2022
In pursuit of better working conditions, China's post-00s generation has gained a reputation for being newbies who are difficult to manage and who show their superiors little respect. While those who go to extremes may be in the minority and some admire their brave fight for workplace rights, ultimately, they may be putting their job prospects in jeopardy.
Read more
Translated by Grace Chong on 11 May 2022

When I was at Zhejiang University to give a speech, I stayed at the university’s guest house at Yuquan (玉泉, lit. Jade Spring) Campus. While I was there, a Hangzhou native friend invited me to tea.

He wanted to pick me up and asked where I was staying. I said, “Lingfeng Villa”. He pooh-poohed the name immediately, saying that the school had borrowed the moniker from somewhere else.

He offered to take me to the real Lingfeng Villa. “It’s a truly elegant and quiet villa that comes with clear spring water so you can enjoy tea,” he said.

The next thing I knew, he was at my doorstep.

We arrived at Yuquan Botanical Garden in no time. After parking the car, he said that the real Lingfeng Villa stands on the mountain behind the botanical garden, which was just a short walk away.

I suddenly remembered that I had been to this place before. It was winter; veteran Kunqu master Wang Shiyu brought me here to see the plum blossoms. That’s right, this is the go-to spot to admire plum blossoms in Lingfeng.

In winter, people from far and wide flock here just to get a glimpse of the new blooms. It’s truly a sight to behold and the atmosphere is no less convivial than that at Broken Bridge in Hangzhou’s West Lake.

Peace and quiet loved and loathed

This time in summer, it was quiet. Besides us who came for a spot of tea, there was no one around. Only the verdant trees bearing the shadows of low mountains and the gurgling sounds of water beckoned us to go deeper into the woods.

After following the babbling brook and taking a few turns, we saw a few houses on a hill. Hidden amongst ancient trees and shrubs was a set of winding moss-covered stone steps, beyond which stood a courtyard covered by half a stone wall carved with four large Chinese characters — 灵峰探梅 (Lingfeng Tanmei).

My friend said the building was refurbished in the last few years because the old Lingfeng Temple had collapsed a long time ago and it was rebuilt several times.

Later on, I looked up the place in《西湖游览志》(lit. Travel Journal of the West Lake) by Tian Rucheng of the Ming Dynasty. The entry said, "Lingfeng Temple, also called Jiufeng Chan Monastery. During the Jin (late Jin) dynasty, the emperor of the Wuyue Kingdom built it during the founding of the kingdom. Zen Master Yanfu Huguang lived there and he owned several fields. Thousands of acres, hundreds of monks... Within the temple, there was the Pavilion of Green Hues (翠微阁), Hall of Sleeping Clouds (眠云堂) and Pond of Vessel Washing (洗钵池). It was tranquil and secluded, with few visitors.”

Fish as large as submarines

We ascended the stone steps and entered the courtyard. There was not a sound to be heard. My friend was delighted. He said, “What a quiet and wonderful place; the mountains are as they were in the ancient times, and one can drink tea and enjoy the long hours of quiet.”

I took a closer look. Goodness, indeed there was no one in sight. The doors and windows of the tea house were locked, the tables and chairs were folded up and the business had long wound up. It must have been because there were too few visitors and the business could not be sustained.

We wandered around and found the site of the temple, halfway up the hill. It was truly beautiful but also rather deserted — only suitable for monks to meditate and cultivate their minds.

From time to time, a few learned individuals might drop by to drink tea and talk about Buddhism. They could read the Golden Scripture and indulge in spiritual talks and pursuits. But to open a teahouse hoping to profit from paying customers would surely be a futile effort.

Since we failed to have tea at the back of the mountain, my friend suggested that we go to the front of the mountain where the Yuquan Fish Observatory was ⁠— we could drink tea and admire huge dark-coloured fish that were as large as submarines.

The Yuquan Fish Observatory is one of the eighteen scenic spots in the West Lake but I’d not been there before. In Zhang Dai's《西湖梦寻》(lit. West Lake Found in Dreams), it is said that there is a Yuquan temple here formerly known as Jingkongyuan (净空院, lit. Pure Empty Temple).

In ancient times, an old monk delivered his teachings there that attracted the Dragon King. Whenever the king was happy with the monk’s preachings, he would clap and spring water would gush forth. The water was as white as jade and that was how the spring got its name.

When Zhang Dai was there, the water was crystal clear and he could see right to the bottom of the spring. "There are more than a hundred five-coloured fish. When the bait is thrown, they would raise their fins, circle the bait and make a grab for it. ... There are many tourists during the spring season. Everyone brings some bait to the temple when they come to admire the fish. The fish are well-fed and satisfied."

We arrived at the fish observatory. It was a rectangular pool surrounded by an iron fence, with a stone plaque on the wall inscribed with the words Yu Le Yuan (鱼乐园, lit. Happy Fish Garden). There were more than a dozen large black fish, each measuring about a metre in length.

I remarked that the fish looked quite big, but my friend was rather dismayed, saying that he clearly remembered them to be much bigger and plentiful in numbers when he was a child — it was like a submarine fleet.

He wondered, could it be that he was very little at that time, and so everything then seemed bigger?

After 40 years of life’s trials, it is certainly hard to discern the true memories of childhood.

Best left in our memories?

There weren’t many people around the fence. A few families were throwing biscuits and corn, and water splashed as the fish flopped around to grab at the food.

Beside us, a mother and daughter pair were also feeding the fish. The 15-year-old daughter was pouting and seemed disinterested, while the mother started chatting with a friend.

The mother said they had come from Tianjin and she used to visit the place with her parents when she was a child. She had seen a large golden fish and was so impressed with it that she couldn’t forget the fish even after several decades. She told her daughter about it and brought her here just to see the golden fish. Who knew that the fish before them now would look so different!

The daughter was very disappointed and the mother was wondering if her memories had failed her. The friend listened, hummed and hawed, and seemed a little helpless, saying that there used to be big fish in the pool — red ones, flower-patterned ones and black ones.

In《西湖新志》(lit. New Xihu Chronicle) published during the tenth year of the Republic of China era (i.e., 1922), it is said that there were "emerald fish in Yuquan measuring about a foot long, and during the Xianfeng period of the Qing Dynasty, they had three fish left. Now only one surviving fish remains, and it stays hidden at the bottom of the pond. One might be able to chance upon it when it comes out for a swim. The fish was mentioned in Qianlong's imperial inscription and it would be 300 years old now."

Perhaps my friend had seen this ancient emerald fish when he was a child. Well, it could have turned into a dragon during the Cultural Revolution, unable to withstand the torments of the age.

After 40 years of life’s trials, it is certainly hard to discern the true memories of childhood.

Related: My longing for the elusive fish of spring | What does Zhuangzi have to do with goldfish in a Suzhou winter pond? | Diplomat, book addict, concubine and sage, all in an old alley of Suzhou | 'Life is indeed like a dream': A cultural historian returns to the barbershop of his childhood | How to drink tea like an ancient Chinese | Suzhou’s way to the Emperor’s heart