China’s Covid-19 strategy has constantly been in the process of tightening and easing restrictions, and the key challenges now will be addressing the rate of deaths and critical cases among the elderly, preventing a squeeze on medical resources and mitigating public doubts about Covid-19 control policies. 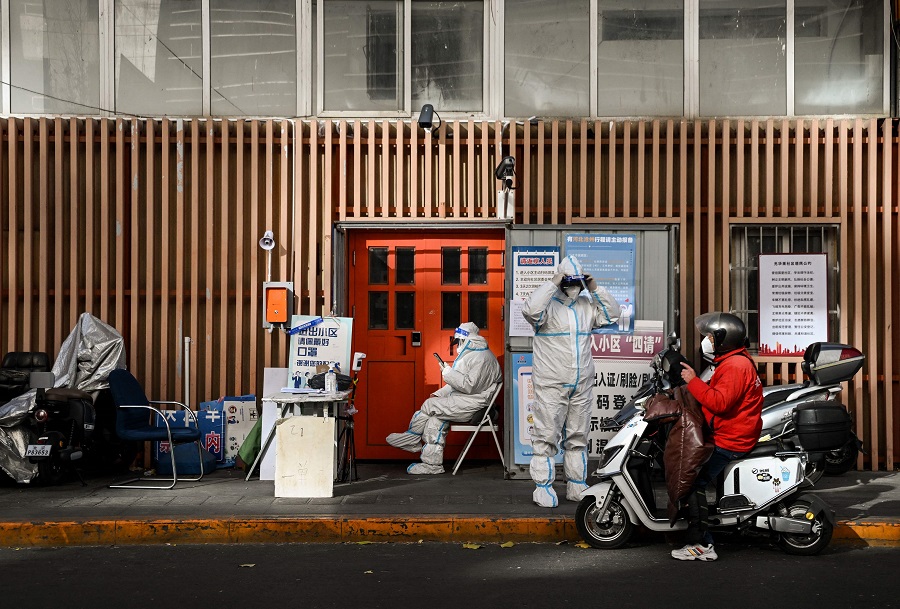 Security personnel guard an entrance to a residential area under lockdown due to Covid-19 restrictions in Beijing, China, on 26 November 2022. (Noel Celis/AFP)

Following widespread protests in numerous Chinese regions over the past weekend, Beijing, Chongqing, Guangzhou and other cities have subsequently announced the easing of Covid-19 restrictions. Furthermore, during a seminar with health experts on 30 November, Chinese Vice-Premier Sun Chunlan, the top official in charge of China’s fight against Covid-19, stated that the Omicron variant has become less pathogenic and emphasised that the country’s Covid-19 battle is “at a new stage and it comes with new tasks”.

The change in official stance rekindled hopes of reopening for those inside and outside of China, with some believing that China is reversing its dynamic zero-Covid policy.

Such optimism had surged when China announced the "20 measures" in mid-November, but was short-lived as anti-Covid restrictions were tightened again in several regions within two weeks, and public discontent soared to new heights.

While the adjustment of the country’s general Covid-19 strategy is clearer this time, the past year has shown that China is constantly in the process of tightening and easing restrictions. It is difficult for China to make an immediate policy U-turn, and the coming adjustments are expected to look more like a “W-turn” marked by numerous back and forths along the way.

... analysts estimate that the reopening of the mainland could see about a million deaths, mainly among the elderly.

Based on the number of Covid-19 deaths in other countries and Taiwan over the past year, analysts estimate that the reopening of the mainland could see about a million deaths, mainly among the elderly.

How do we put a million deaths into context? According to data analysis agency Statista, as of 28 November, the US has reported about 1.1 million Covid-19 deaths, the highest in the world. Currently ranking second is Brazil, which has reported nearly 690,000 Covid-19 deaths. China would become second-placed globally if the number of Covid-19 deaths in the country reaches one million.

Chinese officials are clearly taking precautions to prevent widespread critical Covid-19 cases and deaths. Quoting multiple sources, Caixin reported on 1 December that Chinese officials aim to vaccinate 90% of those aged 80 and above with at least one dose of vaccine by January 2023, and for 95% of those aged between 60 and 79 to either complete two doses of the vaccine or to get the booster shot for those already fully vaccinated.

Given the slow vaccination take-up among the elderly over the past three years, how will authorities accelerate the elderly vaccination programme within just two months? This would be the next key challenge.

China’s Covid-19 strategy and the authorities’ narrative over the past three years would come into question, and the Chinese people would wonder if their years of tolerance and sacrifice has been worthwhile.

Some may question why the authorities are so concerned about severe cases and deaths among the elderly. In mid-November, China saw several deaths among elderly Covid-19 patients, most of whom had severe chronic underlying conditions. Many netizens argued that these elderly could also die from an ordinary cold, and questioned the need to subject the majority of people to strict Covid-19 controls to protect a small high-risk group.

However, these netizens do not realise that the entire community would be affected if severe infections and deaths were widespread among the elderly.

The most direct impact would be the squeeze on medical resources, where non-Covid cases might face a delay in treatment, leading to a secondary disaster as severe as what is seen during lockdowns.

Over the past three years, the authorities have cited large-scale infections in other countries as the basis for adhering to the dynamic zero-Covid policy domestically; the Chinese state media cites the million deaths in the US as a case in point to criticise other countries’ Covid-19 approach of “lying flat”. If an uncontrollable wave of Covid-19 breaks out during China’s reopening and the number of deaths approaches that in the US, China’s Covid-19 strategy and the authorities’ narrative over the past three years would come into question, and the Chinese people would wonder if their years of tolerance and sacrifice has been worthwhile.

Such doubts are more dangerous than the protests over the past week, because that would not only reflect the people’s unhappiness over the current lockdowns and economic situation, but a general rejection of China’s anti-epidemic strategy over the past three years.

... the longer the issue is suppressed, the stronger the backlash will be down the road.

The above mentioned challenges are not unique to China. Raising vaccination rates among the elderly, preventing a squeeze on medical resources leading to a secondary disaster, mitigating public doubts about Covid-19 control policies — these are the three challenges that most countries would have to address in the process of reopening.

However, China’s population is larger and more diverse, with more distinct differences between regions. Also, the strict controls have been in place for a long time — the longer the issue is suppressed, the stronger the backlash will be down the road.

Given the large and complex population in China, the higher-ups will need to be more precise in plotting the path to reopening, while leaving ample room to manoeuvre. This will be a test of the governance capabilities of the authorities and the resilience of the people.

Indeed, there will be bumps on the path to China’s reopening. However, when Covid-19 first broke out, China managed to turn the tide of external criticism, and for a time it was a model of Covid-19 control. Nearly three years later, China is once again facing a stiffer challenge than other countries in Covid-19 control. If China addresses the current flaws in its Covid-19 control policies, pays attention to the people’s voices and moves with the times, while showing efficiency, organisation and real care for the people, isn’t that another chance for China to shift the tide of doubt, both within and outside of China?

This article was first published in Lianhe Zaobao as “中国防疫政策W转”.