Easing pandemic controls could curb RMB’s tumble against the dollar

The RMB's recent dramatic weakening did not come as a surprise to many. As stringent Covid-19 measures gradually ease, along with possible relaxations of policies in the real estate sector, could the worst be over for China's economy? 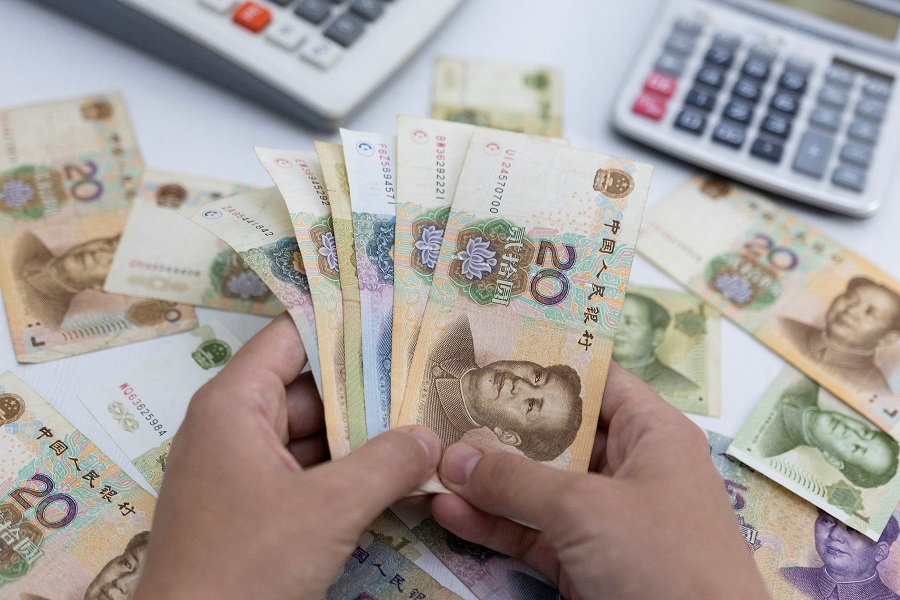 A woman holds Chinese RMB banknotes in this illustration taken on 30 May 2022. (Dado Ruvic/Illustration/Reuters)

Grace Chong - 21 June 2022
In pursuit of better working conditions, China's post-00s generation has gained a reputation for being newbies who are difficult to manage and who show their superiors little respect. While those who go to extremes may be in the minority and some admire their brave fight for workplace rights, ultimately, they may be putting their job prospects in jeopardy.
Read more
Translated by Grace Chong on 2 June 2022

The RMB’s recent weakening has been dramatic, but to many, it wasn’t a surprise.

Analysts were already predicting late last year that the RMB’s appreciation since June 2020 — due to a combination of surging exports and capital inflows — could lose steam, especially once the US Federal Reserve (Fed) started raising interest rates to tame inflation.

However, they did not anticipate that China would soon be battling its worst outbreak of Covid-19 going back to early 2020. Since January this year, authorities in many cities have been enforcing widespread lockdowns and mass testing to contain the virus, worsening an economic slowdown.

Lingering worries about Chinese growth and a surge in US Treasury yields backed by a tightened monetary policy have left the RMB less attractive against the dollar than it used to be. After months of trading between 6.3 and 6.4 against the greenback, the Chinese currency weakened significantly starting mid-April.

From 19 April to 13 May, the daily RMB reference rate against the US dollar weakened by 6.6% to 6.7898, the weakest since the end of September 2020, according to data from the central bank-backed China Foreign Exchange Trade System.

... the narrowing yield spread between Chinese and US government bonds, the country’s ongoing battle with the pandemic and overall pressure on the economy are all signs that the [RMB] could continue to weaken.

“This is the fastest depreciation of the RMB since 2012,” said economist Zhang Tao in an opinion piece published in May.

While many analysts pointed out that the RMB’s correction is natural considering its long winning streak against the dollar, the narrowing yield spread between Chinese and US government bonds, the country’s ongoing battle with the pandemic and overall pressure on the economy are all signs that the currency could continue to weaken.

Even so, economists at Ping An Securities Co. Ltd. believe that room for further depreciation is limited this year.

“Right now, further upside momentum of the US Dollar Index is relatively limited. As China’s economy gradually recovers from the worst [of the impact from Covid-19 control measures], … the period of greatest downward pressure on the RMB may have passed,” they said in a report last week.

Increased pressure on China’s economy due to lacklustre consumer spending and industrial activity in recent months is one of the main factors that have dragged down the RMB against the dollar, according to Zhang. Another is the divergence between US and Chinese monetary policy, with the Fed beginning to raise interest rates, while China has cut rates. The Fed’s tighter monetary policy will probably continue to reduce the amount of dollars in circulation, bolstering the currency’s relative value.

... domestic companies have been less willing to swap dollars and other foreign currencies they have earned for the RMB, lowering demand for the Chinese currency.

Several analysts told Caixin that domestic companies have been less willing to swap dollars and other foreign currencies they have earned for the RMB, lowering demand for the Chinese currency. This will be a major contributor to the RMB’s depreciation in the days to come, they said.

“Since the beginning of April, companies have been less motivated to settle their foreign exchange, mainly because their expectations have changed and they are bearing more risks,” a senior foreign exchange trader told Caixin.

Many exporters have been taking a wait-and-see attitude and choosing not to sell their foreign exchange earnings amid the RMB deprecation, a banker told Caixin.

A weaker RMB could be good for the economy because it generally makes Chinese exports cheaper for buyers in the rest of the world, said Wang Youxin, a senior researcher at Bank of China Ltd.

China’s export growth in April slowed to 3.9% year-on-year in dollar terms, the weakest since June 2020, triggering concerns that orders might be shifting to Southeast Asian countries such as Vietnam, which have already lifted pandemic controls and restarted production.

However, a weaker RMB could also have an adverse impact on the import sector, and lead to a depreciation of RMB-denominated assets and capital outflows, economists said.

China’s financial regulators were quick to quell concerns. An official at the China Banking and Insurance Regulatory Commission (CBIRC) said in mid-May that fluctuations in the RMB exchange rate remained within a “reasonable range” and that the pullback was a “normal market reaction to a rise of the currency against the US dollar for a fairly long period.”

Outlook for the RMB

Economists have different points of view on whether the RMB will depreciate beyond the 7-per-dollar level, a psychological threshold seen as key to underpinning market confidence in the currency.

“We continue to expect the RMB to fluctuate against the USD as the latter moves against other major currencies, potentially breaking 7 in the coming months if the USD strengthens further, though it could move stronger before then and is expected to end the year at around 6.9,” economists at UBS Investment Bank wrote on 24 May.

“Development is the key to solving all current problems, and the government needs to strike a better balance between economic development and pandemic control with growth as the higher priority.” — Premier Li Keqiang

However, the Ping An economists believe that the RMB is unlikely to depreciate to 7 per dollar or beyond. While more fluctuations could be in store, they forecast that the RMB would remain below the symbolic level and trade at around 6.85 by end of the year.

“After the State Council announced on 23 May a new stimulus package to stabilise the economy, the onshore RMB appreciated to 6.645 per dollar during night-time trading,” they wrote in the report. The package included tax relief for businesses and deferred loan repayments for consumers and small companies hit hard by Covid-19 control measures.

As the impact of stringent Covid-19 control measures gradually eases, along with the expectation of more relaxed policies in the real estate sector and unprecedented support of fiscal policies, the worst could be over for China’s economy, the Ping An economists wrote.

Development is the key to solving all current problems, and the government needs to strike a better balance between economic development and pandemic control with growth as the higher priority, Premier Li Keqiang said at a State Council meeting on 25 May.

The news of Beijing and Shanghai easing Covid-19 restrictions over the past few days also lifted sentiment, with the offshore RMB rising and the benchmark CSI 300 Index gaining 1.55% on 31 May.

“China may be emerging from its ‘darkest hour’,” the Ping An economists said.

This article was first published by Caixin Global as "In Depth: Behind the Yuan’s Tumble Against the Dollar". Caixin Global is one of the most respected sources for macroeconomic, financial and business news and information about China.