Germany between the US and China

With a new chancellor in place, how Germany will adjust its approach to China amid growing rivalry between the two superpowers is an issue that is closely watched by many countries around the world. US academic Zhu Zhiqun examines the possibilities. 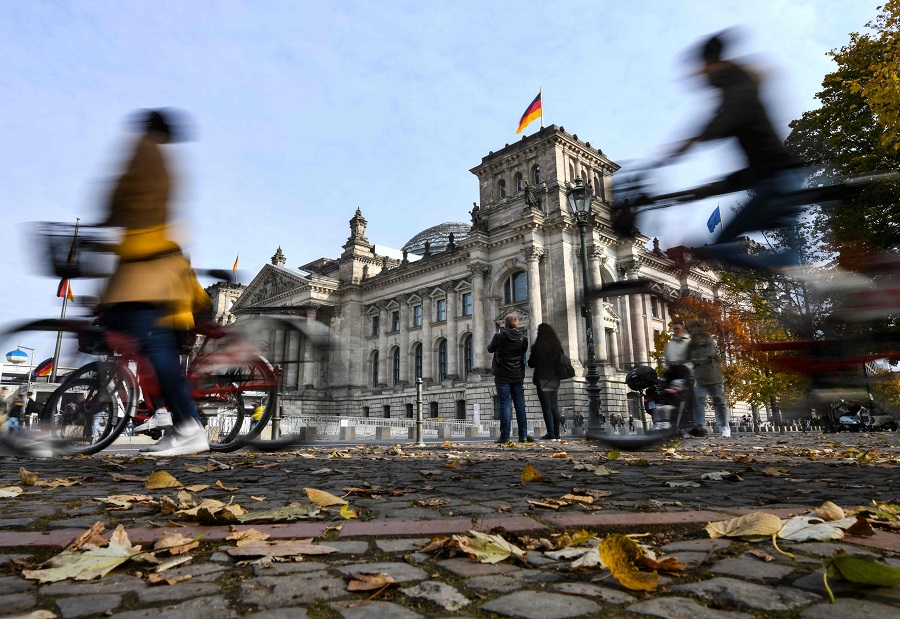 Leaves lay on the ground as pedestrians and bicycle riders are seen in front of the Reichstag building housing the lower house of parliament Bundestag in Berlin, Germany, on 19 October 2021. (Ina Fassbender/AFP)

Grace Chong - 27 January 2023
Regulators are ramping up efforts to cull poorly performing firms and those that violate the rules or break the law. A record number of companies got the boot from Chinese mainland stock exchanges last year, and that number could even double in 2023.
Read more
Translated by Grace Chong on 6 January 2022

In a world dominated by escalating US-China rivalry today, Germany remains a major power that plays an influential role in international politics and economics. With a population of over 84 million, Germany is the biggest country and largest economy in the European Union (EU). As a close US ally, how does Germany handle China’s rise? What does the future hold for Germany-China-US relations?

Olaf Scholz assumed office as the new German chancellor on 8 December 2021, succeeding Angela Merkel who had served for 16 years from 2005 to 2021. Chinese President Xi Jinping wasted no time in sending congratulations to the new chancellor and the two leaders had a phone conversation on 21 December 2021. Xi emphasised stability and continuity of the bilateral relationship. Scholz reportedly told Xi that German-Chinese relations should be developed “in the spirit of mutual respect and mutual trust”, indicating his intention to carry on Merkel’s approach toward China.

Controversially, Scholz also said that he hoped the stalled EU-China investment deal "will take effect as soon as possible". The remark seemed to contradict the coalition agreement Scholz's Social Democratic Party struck with two other parties when they formed the current German administration. That agreement suggested that the investment deal with China would not be ratified at this stage due to human rights concerns.

Modern Germany has been closely linked to modern China. Imperial Germany participated in suppressing the Boxer Rebellion at the turn of the 19th and 20th centuries. During World War I, China supported the Allies with the assumption that Germany-controlled Shandong Peninsula would be returned to China if the Allies triumphed.

While most global markets declined in 2020, car sales of BMW and Daimler in China increased by 7.4% and 11.7% respectively, both making historic sales records.

Japan took advantage of the war in Europe and seized control of Shandong Peninsula in 1914. Though China was on the winning side, its representatives were told to officially sign away rights to Shandong Peninsula to Japan at the Treaty of Versailles. This humiliating diplomatic defeat triggered the May Fourth Movement in 1919, the origin of modern Chinese nationalism.

Nazi Germany allied itself with Japan during World War II. After WWII, Germany was divided into two states: a democratic West Germany and a communist East Germany.

After German reunification in 1990, relations between Germany and China have steadily grown. Economic and political relations became stronger during Merkel’s time in office.

Karl Marx, founder of the communist philosophy, served as a special link between China and Germany. In Germany, Marx is a controversial figure and is reviled by many, particularly former residents of East Germany. In China, Marxism remains a guiding principle of the Chinese Communist Party.

Before the outbreak of Covid-19, about 150,000 Chinese tourists visited Marx’s hometown Trier every year. The Chinese government donated a statue of Marx to the city of Trier to mark the bicentenary of his birth in 2018. A large number of Chinese would also make a stop in Bonn to visit the birthplace of beloved composer and pianist Ludwig van Beethoven.

China is the single most important market for Germany’s automobile industry. Volkswagen sells more cars in China than in Germany. Volkswagen is one of the largest and most successful foreign businesses in China. Its first joint venture in China, Shanghai Volkswagen, was established as early as October 1984.

Germany wishes to maintain strong and dynamic relations with both powers. For its own national interests, Germany will keep some autonomy in its China policy and will not always follow the US leadership.

Despite headwinds from the Covid-19 pandemic, in 2020 China accounted for 38% of global car sales of Germany's largest car manufacturers Volkswagen, BMW and Daimler. While most global markets declined in 2020, car sales of BMW and Daimler in China increased by 7.4% and 11.7% respectively, both making historic sales records. Volkswagen saw an overall decline of 15.2% in sales in 2020, but sales in China only decreased by 9.1%.

Germany and China have also signed a wide range of cooperation agreements in recent years, from public health to food security and from transport to energy.

The Germans tend to be pragmatic and less ideological in foreign affairs. Like most other US allies and partners, Germany appears unwilling to choose sides in the US-China rivalry. Germany wishes to maintain strong and dynamic relations with both powers. For its own national interests, Germany will keep some autonomy in its China policy and will not always follow the US leadership. As an example, in 2015, Germany defied US pressure and became a founding member of the China-led Asian Infrastructure Investment Bank (AIIB). China and Germany also hold shared views on many international affairs. For instance, both countries opposed the US invasion of Iraq in 2003.

As the US shifts its strategic focus to Asia and as China’s Belt and Road Initiative expands to Europe, many European countries including Germany are getting concerned about the uncertain future and are attempting to maintain a balance in their relations with the US and China.

Germany has consistently been critical of Chinese human rights policies... German media coverage and public perceptions of China have turned more negative in recent years, which may pose some challenges to deepening bilateral relations.

Unlike the US-China relationship which is full of problems and disputes, the Germany-China relationship is less complicated. No major obstacles stand in the way between the two sides, with the human rights issue being perhaps the exception.

The Social Democratic Party, like most other political parties in Europe, values social justice and human rights. Germany has consistently been critical of Chinese human rights policies. In July 2019, the UN ambassadors from 22 nations, including Germany, signed a letter to the UN Human Rights Council condemning China's mistreatment of the Uighurs and other minority groups.

German media coverage and public perceptions of China have turned more negative in recent years, which may pose some challenges to deepening bilateral relations.

As of this writing, neither the EU nor Germany has decided whether to follow the US in diplomatically boycotting the 2022 Beijing Winter Olympics. The new German foreign minister from the Green Party, Annalena Baerbock, has been urging a tougher stance against China’s human rights violations. She and Germany’s sports minister have announced that they will not visit China for the Olympics, but they were careful to avoid the term “diplomatic boycott.”

Overall, European countries are not as anxious as the US to believe China is going to take over the world and create a new illiberal international order soon.

Germany and Japan rose to the top as leading industrialised powers in the late 19th century. Japan and Germany, the world’s third and fourth largest economies, are models of modernisation and innovation.

People often compare the two countries in terms of how they reflect upon their imperial past. Germany does not carry historical baggage and is generally viewed favorably. There are no outstanding history issues between Germany and its neighbors or former victims.

Japan, on the other hand, continues to have rocky relationships with its neighbours and victims. In particular, Japanese officials’ visits to the Yasukuni Shrine where WWII war criminals were enshrined have been a sticky issue in Japan’s relations with China and Korea.

China overtook the US to become the EU's biggest trading partner in 2020, with the total worth US$709 billion. Bilateral trade continued to grow and was expected to reach US$800 billion in 2021. Unlike the US which treats China as the strategic rival, the EU considers China to be a strategic partner and a systemic rival simultaneously. Overall, European countries are not as anxious as the US to believe China is going to take over the world and create a new illiberal international order soon.

Like most other European countries, Germany balks at pursuing a China policy focused on containment, under the guise of competition. Nevertheless, Germany will continue to pressure China on human rights issues as a key component of its China policy.

Unlike the US, Germany does not feel threatened by China’s rise and does not intend to contain China or impede China’s growth. In managing relations with its most important security ally on the one hand and its largest economic partner on the other, Germany has taken a more independent, nuanced and balanced approach as US-China rivalry intensifies. It is likely to continue to maintain such autonomy in the Germany-China-US trilateral relationship in the future.

Related: Germany’s China policy: Will economic interests override values? | Biden's plan to join hands with the EU against China doomed to failure | Securing its place in the world economic order: The EU can't afford to wait for the US | Chinese academic: China-EU investment deal is of great strategic value to China | Beijing Olympics diplomatic boycott: Does China care?