How Japan's political stance is becoming increasingly hawkish and conservative

Academic Toh Lam Seng traces the history of Japanese politics from its “1955 system” of clear policy difference between the conservatives and reformists to the more recent potato-potahto matches between conservative parties born out of LDP factionalism or splintering. Seen in this light, is the Japanese population really growing more conservative and politicians are merely tapping into this trend, or are the political parties themselves perpetuating an endless cycle of conservatism? 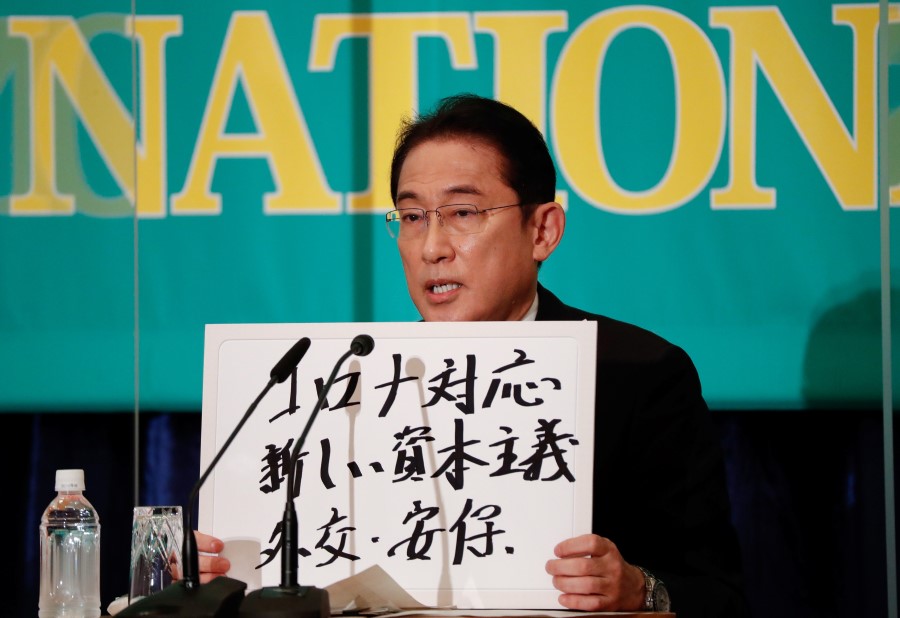 Japan's Prime Minister Fumio Kishida, who is also the president of the ruling Liberal Democratic Party, holds up a placard reading "Corona disease countermeasures, New Capitalism. Diplomacy and security" at a debate session with other leaders of Japan's main political parties ahead of the 31 October 2021 lower house election, at the Japan National Press Club in Tokyo, Japan, 18 October 2021. (Issei Kato/Reuters)

Candice Chan - 25 January 2023
While the Americans have made noticeable progress in their “pivot” to Asia, the crux of successful regional engagement rests on Washington’s ability to work with and around China’s indisputable links and influence in this part of the world, while managing its own relationship with Beijing.
Read more
Translated by Candice Chan on 22 October 2021

First, the “doves” in the party have completely faded out. Even Fumio Kishida, the new prime minister and current leader of the leading Kochikai faction within the LDP — who previously advocated “going light on weapons and heavy on the economy” — has said publicly that he intends to strengthen arms and change the constitution, and make opposing China the Cabinet’s top priority.

Second, even looking at 58-year-old runner-up and young guard Taro Kono, who failed in his bid for a changing of the guard, as well as his comrades former Defence Minister Shigeru Ishiba and Shinjirō Koizumi, son of former PM Junichiro Koizumi — their rhetoric was no milder than Kishida’s. Even if these three, touted by Japanese media as the Koizumi-Shigeru-Kono anti-Abe alliance, had won, it would not change their intentions of quickly leading Japan towards the right.

Of course, in assessing Taro Kono’s political stand and ambitions, we cannot just look at the 1993 statement by his father Yohei Kono, then chief cabinet secretary, in admitting that the authorities were involved in the “comfort women” incidents, or that Taro Kono previously said that he would not pay respects at the Yasukuni Shrine while he was in politics, and take it for granted that Taro Kono is different from the hawkish politicians.

...whether between the doves and hawks, young and experienced, or male and female politicians in the LDP, the commonality is they all want to quickly fulfil the LDP’s long-held mission to change the constitution, and to oppose their neighbour China.

Hawkishness regardless of age or gender

Third, in the history of the LDP, the hawkish election rhetoric of female candidate Sanae Takaichi (a graduate of the Matsushita Institute of Government and Management and backed by former PM Shinzo Abe) was second only to that of the Seirankai — a blood alliance led by cross-faction right-wing young guards Ichiro Nakagawa and Shintaro Ishihara that was unhappy with Prime Minister Kakuei Tanaka’s visit to China and the normalisation of China-Japan relations in the early 1970s.

In other words, the most prominent point about this person who did not manage to become Japan’s first female prime minister but remains active in party politics is not her gender, but her especially bold speech and hawkish stance.

We can see that whether between the doves and hawks, young and experienced, or male and female politicians in the LDP, the commonality is they all want to quickly fulfil the LDP’s long-held mission to change the constitution, and to oppose their neighbour China.

Many people attribute this obvious right-wing tendency to three major factors: pandering to conservative voters, pressure from the US, and the rise of China.

Of course, these three factors do exist and they do make sense. However, on serious consideration, they do bear further exploration and analysis.

Deadlock between conservatism and reform

First, the conservativeness of Japanese voters.

Compared to the political atmosphere before the 1990s that showed a dichotomy of opinions about the direction of the country, Japan is generally becoming more conservative.

However, it needs to be analysed whether this is an extension or consequence of Japan’s increasingly conservative political arena, or whether it is a driver of this conservatism.

The fact is, since 1955 when the LDP was established with its mission of pushing conservatism, it went up against the reformist Japan Socialist Party (JSP), creating two major camps. The former upheld the US-Japan Security Treaty and advocated abandoning or changing the post-war peace constitution, while the latter objected to the US-Japan Security Treaty and firmly held to the post-war peace constitution. Each side had a clear stand and was similarly strong — the Japanese called this the “1955 system”.

...the JSP was often able to hold just about one-third of the seats in the Diet, because a vote for the JSP was a vote against changing the constitution.

This is why hawkish former Prime Minister Yasuhiro Nakasone — who single-mindedly wanted to conduct a “final reckoning” of post-war politics and go back to pre-war ways — pegged the JSP as the biggest obstacle to changing the constitution.

The strategy to reform the political arena

From another perspective, the JSP’s existence gave voters who were unhappy with the LDP (especially with its policy of changing the constitution) an alternative. In a more extreme sense, in that situation, it did not matter if an individual JSP candidate was not truly against the war, or if they were bumming around and “snoozing” at work; the JSP was often able to hold just about one-third of the seats in the Diet, because a vote for the JSP was a vote against changing the constitution.

Of course, the hawks in the LDP were unhappy with the situation. To change things, Shin Kanemaru — LDP vice-president in the early 1990s — reached an agreement with then JSP chairman Makoto Tanabe, who also did not want to be forever in the opposition, to push for political reform.

As Kanemaru was forced to leave politics after being embroiled in a financial scandal, this mission to turn the situation of opposing conservatives and reformists into one where two conservative parties took turns in office fell on the shoulders of LDP mainstream youth strongman Ichirō Ozawa.

Ozawa’s dramatic exit from the LDP to start a new party, and his behind-the-scenes machinations to create a non-LDP, eight-party coalition government led by Morihiro Hosokawa, was an effort to create once and for all a political arena dominated by two identical conservative parties; and not about having “dirty water (Ozawa, lit. small swamp) wash away the built-up sludge in the drain” as expected or interpreted by some Japanese media.

The Japanese political arena entered a time of what the Japanese called kare raisu (curry rice) or raisu kare (rice with curry) — two conservative parties against each other...

Looking at the results, the Kanemaru-Ozawa strategy and its projected aims were successful — after that, the Japanese political arena was all about permutations and combinations of LDP candidates. Especially in 1994, when Ozawa belittled JSP chair Tomiichi Murayama for becoming a puppet prime minister of the political enemy the LDP, ending the 1955 system of opposition between conservatism and reform.

The Japanese political arena entered a time of what the Japanese called kare raisu (curry rice) or raisu kare (rice with curry) — two conservative parties against each other, even if the side facing the LDP kept changing names and formations. The Murayama-led JSP that threw its lot in with its political enemy went downhill from there, and was forced to change its name to the Social Democratic Party (SDP), reduced to playing only a supporting role among supporting roles.

Who created the conservative political atmosphere?

Clearly, the argument that the so-called growing conservativeness of Japanese voters is due to politicians pandering to voters’ conservatism does not stand. This is what we have to take note of in reviewing Japan’s general conservatism — or general LDP-ism — in the 1990s, and assessing Japan’s current political direction.

In fact, the authorities amending school textbooks and visiting the Yasukuni Shrine, and the mass media advocating pre-war ideas and narrow nationalism in line with national policy have contributed to growing conservatism among Japanese voters. These actions are a key factor that cannot be ignored.

Looking at the three hawkish politicians vying to be party chief and releasing hawkish comments as never before, is this posturing for the benefit of conservative voters, or are they baiting the public and creating a more conservative political atmosphere? Clear-eyed people will have no difficulty in identifying the correct answer.

This text was part of a speech titled “Japan’s politics and diplomacy”, for New Era University College in Malaysia.

Related: The real reason why Japan is following the US’s lead | No concrete vision for future Japan-China relations despite telephone talks between Xi Jinping and Fumio Kishida | Strong China-Japan relations a fantasy in a divisive world: Will ASEAN benefit? | Balancing China: Can Japan continue to be a reliable power in SEA after Abe? | How will the Liberal Democratic Party’s presidential election affect Japan's China policy? | Can Japan rise above faction politics and become the 'bridge to the world' under new PM Kishida?