South Korean angst directed towards China during the Winter Olympics suggests that anti-China sentiment in South Korea has not completely subsided from the time of China's reprisals against South Korea for the THAAD missile system deployment some years ago. In such a climate, bilateral relations could get rockier if Yoon Seok-youl of the conservative People Power Party makes it to the finish line in South Korea's March presidential election. 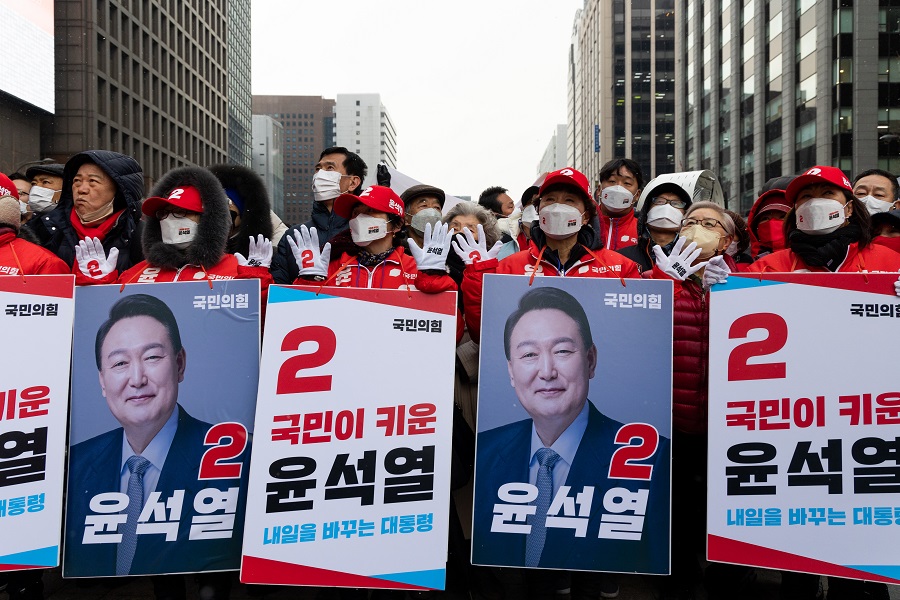 Grace Chong - 21 June 2022
Over the past several years, Chinese private firms have ferociously invested in India’s tech start-ups. Initially welcomed, China’s diversion of interest from erstwhile US investment has been viewed with some measure of suspicion since the Galwan Valley conflict. Are we living in a world where investment patterns are determined by statecraft? ISAS academic Karthik Nachiappan examines the issue.
Read more
Translated by Grace Chong on 22 February 2022

The 2022 Beijing Winter Olympics drew worldwide controversy, not least for strict quarantine measures amid the pandemic and diplomatic boycotts from several countries including the US. But it also drew ire closer to home, from the people of South Korea.

After the opening ceremony, the South Korean public was angered over the use of hanbok — the traditional Korean attire — for the representation of Korean Chinese minorities in Manchuria. It was perceived as Beijing’s attempt to appropriate Korean cultural heritage and claim it as “Chinese”.

The South Koreans were further incensed after two South Korean athletes were disqualified in the men’s 1,000m short-track speed skating semi-final. The South Korean audience accused judges of being biased towards China and allowing Chinese skaters to pocket the medals in the finals.

South Korean anti-Chinese sentiment has been building for a while

This episode is but the latest outpouring of anti-Chinese sentiment that has been brewing since South Korea decided to deploy the Terminal High-Altitude Area Defence (THAAD) missile defence system in July 2016.

Seoul’s decision was a defensive precaution against North Korean missiles, but China perceived it as a threat to its national security as the THAAD radar tracks enemy’s missiles at a range of between 870 to 3,000 km, which would cover most of eastern China.

Thus, China imposed unofficial economic sanctions on South Korea, such as banning Chinese tourists to South Korea and censoring South Korean TV shows and movies, which cost the South Korean tourism industry about US$19.2 billion worth of losses.

An increasing wariness against China’s moves to appropriate South Korean history and culture has also precipitated the recent surge of anti-China sentiment.

In 2002, the Chinese Academy of Social Sciences (CASS), a Chinese governmental think tank, claimed that Goguryeo — one of the ancient Korean kingdoms that existed in Manchuria and from which originates the name “Korea” — was a regional Chinese entity in what is known as the Northeast Project.

Fast forward to November 2020 and the Chinese mobile game “Shining Nikki” was heavily criticised by the Chinese public for introducing hanbok as a traditional Korean dress, asserting that the attire originated from hanfu — the traditional Chinese attire worn by Han Chinese people.

An article from South Korean newspaper Chosun Ilbo last year even suggested that China’s attempt to “steal” Korean culture and history will eventually become a claim on the Korean peninsula and lead to a gradual “sinicisation” of the Korean people.

Amid these developments, South Koreans’ animosity towards China has skyrocketed. A poll from Hankuk Research in the first week of January 2022 shows that South Korean people viewed China less favourably (27.0 out of 100) than Japan (27.8 out of 100) and North Korea (30.2 out of 100), while the US had the highest score of 55.8.

Considering that China scored 36.6 and Japan 23.4 in the first week of January 2020, South Korea’s anti-China sentiment has escalated rapidly in the past two years. This shows that China’s hostile actions towards its neighbours in the name of protecting its national interests has garnered backlash among the South Korean public.

In particular, China’s intervention in the THAAD deployment was perceived as an interference with national security and the assertion of Chinese economic leverage and cultural imperialism at the expense of South Korean historical and cultural heritage.

...it is likely that anti-China sentiment will draw South Korean people’s vote towards the conservative People Power Party (PPP) and away from the ruling Democratic Party of Korea (DPK) which showed a reluctance in resisting China's behaviours.

Anti-China sentiment in South Korea will have a bearing on China as it will be a key factor in the South Korean presidential election in March 2022 and can potentially affect Seoul’s foreign policy towards Beijing.

Due to China’s stake in the South Korean economy and the country making up about a quarter of South Korea’s trade, the incumbent Moon administration was reluctant to join the US’s Indo-Pacific strategy to contain the rise of China.

In 2017, the Moon administration gave a “three Nos” assurance to China, namely that there would be no additional deployment of THAAD batteries in South Korea, that South Korea would not participate in the US-led missile defence system, and it would not create a trilateral military alliance with the US and Japan.

Thus, it is likely that anti-China sentiment will draw South Korean people’s vote towards the conservative People Power Party (PPP) and away from the ruling Democratic Party of Korea (DPK) which showed a reluctance in resisting China's behaviours.

PPP’s presidential candidate Yoon Seok-youl, a former prosecutor general of South Korea, has been addressing his pledges to restore the ROK-US alliance that he claims have been weakened during the five years of Moon’s presidency. He also suggested additional THAAD deployment and regarded it as a matter of South Korean sovereignty. Hence, a Yoon victory at the polls could attest to the South Korean public’s recent antagonism towards China.

In this scenario, relations between Seoul and Beijing are expected to be strained in the next five years and further economic sanctions over additional THAAD deployments are probable. In contrast, South Korea’s relations with the US will significantly improve, which will aggravate China’s burdens amid greater US-China competition. This scenario is highly likely since Yoon is leading the other candidates in most of the recent polls.

The ruling DPK candidate Lee Jae-myung, former governor of Gyeonggi-do, on the other hand, follows Moon’s “strategic ambiguity” in relation with South Korea’s relations with the US and China, that is, maintaining both a security alliance with the US and a strategic cooperative partnership with China. During the presidential debate, Lee also opposed Yoon’s pledge to deploy additional THAAD, concerning the possibility of further Chinese sanctions.

If Lee becomes the next president, despite the South Korean public’s anti-China sentiment, South Korea’s relations with China are less likely to become more strained and there might even be some prospects of improvement. On the other hand, cautious behaviours not to anger China may provoke public condemnation and create domestic instability during Lee’s presidency, and possibly further marginalise the ROK-US alliance.

Northeast Asian regional relations may witness a drastic shift in March 2022 regardless of which candidate is victorious in the South Korea presidential election. The South Korean public’s increasing China-inflicted anti-China sentiment may become the pivot determining Seoul’s foreign policy in the upcoming five years while souring relations between the two states may also cause headaches to decision makers in Beijing.

Related: When neighbours disagree: Did China 'steal' South Korea’s culture and historical memory? | South Korea and America’s Indo-Pacific strategy: Yes, but not quite | The world needs to pay attention to renewed Korean peninsula confrontation | To lead the world, Biden's US will need China's help with North Korea