Mixed signals to the US? China has revealed its bottom line

After a brief softening of its stance towards the US, China seems to be hardening its rhetoric again. Zaobao correspondent Yang Danxu says this has much to do with President Xi Jinping’s clear message not to trifle with the Chinese Communist Party’s bottom line — relations between the party and the people are sacrosanct. 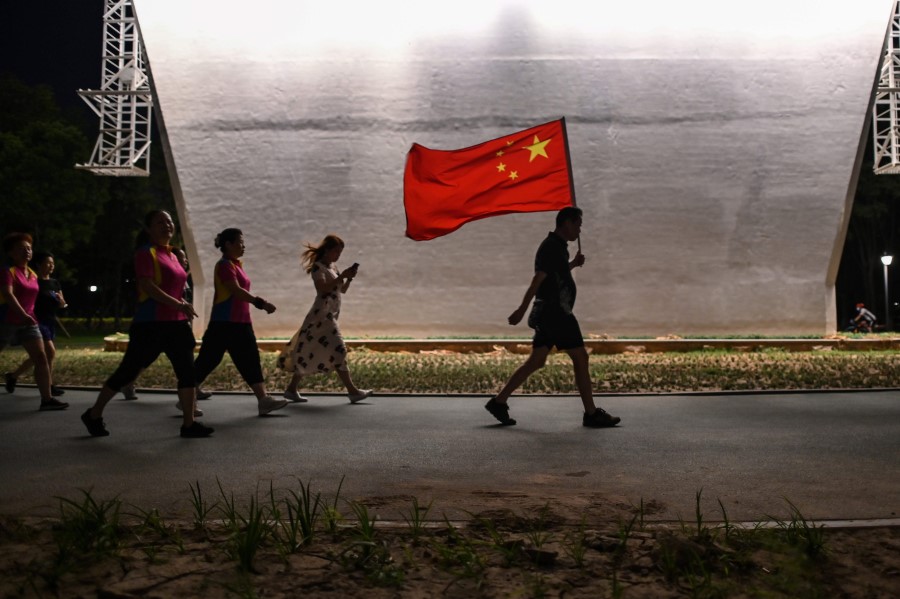 In this photo taken on 4 September 2020, a man walks with the Chinese national flag in a park next to the Yangtze River in Wuhan. (Hector Retamal/AFP) Grace Chong - 16 September 2020
For all of President Trump’s failings, says US academic Han Dongping, he did persist in his belief that the US has over-extended itself abroad and sought ways to pull it back. Whoever becomes the US president next will have to recognise that the US’s global role has changed irrevocably since 1945.
Read more
Translated by Grace Chong on 10 September 2020

China-US relations are at their lowest in decades, and keep getting worse. How will China respond? What exactly is its policy towards the US? Recent signals have been mixed.

Last month, several of China’s top diplomats — including Yang Jiechi, member of the Politburo and director of the Office of the Central Commission for Foreign Affairs, and Foreign Minister Wang Yi — weighed in on the China-US issue, seemingly having softened their position. At the time, China and the US had gone through an anxious time of consulate closures, and the US was attacking China on various fronts — politics, diplomacy, economics, and technology — at an unprecedented rate, while there was also sabre-rattling on both sides over issues such as the Taiwan Strait and the South China Sea, significantly adding to the risk of conflict.

This has been praised by China’s academics, and some analyses have it that it would not benefit Beijing to go head-on with the US and let the arguments grow.

China’s top diplomats spoke out several times, publicly stating their position on China-US relations. They attributed the recent downward spiral of bilateral relations to certain US politicians, but still recognised the development of ties over time, emphasising that China believes it can cooperate with the US without decoupling, and called for managing differences and avoiding opposition.

After China’s confrontational, tit-for-tat declarations during the trade war, such a measured, calm, and even somewhat deferential tone has been interpreted as a new direction in China’s diplomatic policy towards the US. This has been praised by China’s academics, and some analyses have it that it would not benefit Beijing to go head-on with the US and let the arguments grow. Softening its tone and stance would ease the intense competition with the US and keep the disagreements from boiling over.

Apparent mixed messaging in China’s approach to the US

However, less than a month since giving out these signals, the situation seems to have changed again.

On 3 September, in a strongly worded speech at a symposium commemorating the 75th anniversary of the end of World War II, Chinese Communist Party (CCP) General Secretary Xi Jinping declared five things that China would never agree to, including allowing any individual or any force to distort the history of the CCP or vilify its nature and mission; changing the road of “socialism with Chinese characteristics”; separating the CCP from the Chinese people and setting them against each other; imposing their will on China and changing its direction of development; and impeding the Chinese people’s right to development.

Xi’s statement even emphasised “fighting spirit”, clearly setting a determined tone for China’s policy towards the US.

China’s leaders are responding very publicly and specifically to the current US policy towards China. “Any individual or any force” obviously refers to the US, as well as Pompeo and other hawkish US top officials.

Such statements are significantly different from earlier statements by China’s foreign affairs agencies — tough and firm, with no room for compromise. Xi’s statement even emphasised “fighting spirit”, clearly setting a determined tone for China’s policy towards the US. Some even predict that when dealing with the US and publicising China-US relations, Chinese officials will probably move towards the concept of “fighting”.

Two different signals have been sent out within a month: one for peace, and another for confrontation. Outsiders are baffled and wonder if China’s policy toward the US is not firmed up. Are there completely different positions and opinions when it comes to handling issues about the US?

To the CCP, such attacks are highly ideological and akin to subverting its ruling status and sowing discord between the CCP and the Chinese people, which are serious life-and-death matters.

CCP to the US: Don’t mess with our bottom line

Looking closely at the five points Xi mentioned, the strongest one relates to the relationship between the CCP and the Chinese people. Former US deputy assistant secretary of state Susan Shirk told Bloomberg that Xi is using the attacks and suppressions inflicted on China by the Trump administration to strengthen the bond between the CCP and the Chinese people and reinforce the status of the paramount leader.

China-US competition intensified following the outbreak of the Covid-19 coronavirus. The Trump administration is changing its point of attack, which over the past two years, has focused on China being its strategic competitor. Now, the shots it is firing are aimed at making a distinction between the CCP and the Chinese people and positioning itself as anti-CCP but not anti-China. This includes criticising Huawei as a surveillance mechanism of the CCP, and urging the free world to change communist China. To the CCP, such attacks are highly ideological and akin to subverting its ruling status and sowing discord between the CCP and the Chinese people, which are serious life-and-death matters.

Thus, compared to the earlier attitudes of Chinese foreign ministry spokespersons towards China-US relations, Xi’s five “never-dos” do not only address current China-US relations but speak of China’s strong stance on a fundamental matter of principle. To higher-ups in China, this is a red line that can never be crossed and has no room for negotiation. Such a tough stance on this issue is hardly surprising. Put simply, China has revealed its bottom line.

However, what is worrying is that when China-US competition spreads to the ideological battleground, risks of crossing this red line would certainly increase.

With regards to the actual handling of China-US relations, the attitudes of senior officials in China’s foreign ministry suggest that an emphasis on cooperation and easing conflict is the way to go. China-US relations have always been the top priority in China’s foreign relations. After decades of relations, the interests of both countries are closely tied to each other and none of them can bear the consequences of a battle. Preventing China-US relations from spinning out of control aligns with Beijing’s long-term interests, especially since China is now at a crucial stage of its rise and all unnecessary mishaps with its foreign relations could affect China’s important opportune time for development. This is what Beijing does not wish to see happen.

Academics we spoke to speak of the five “never-dos” as the foremost theme in setting the tone in China-US relations. The earlier attitudes of Chinese foreign ministry officials are next in line. On closer examination, the two actually do not contradict each other — while they may seem to be opposite on the surface, what stands between them is the not-so-secret red line of China. However, what is worrying is that when China-US competition spreads to the ideological battleground, risks of crossing this red line would certainly increase. Long-term intense battling and confrontation seem to be increasingly unavoidable.

Related: Is the US just a ‘paper tiger’ or is she able to derail China’s progress? | US-China trade talks resume on a wary note | To manage Trump the 'destroyer', China needs 'guerrilla’ tactics | China must endure the storm, for time is on its side