Pakistani Prime Minister Imran Khan’s recent visit to Moscow during Russia’s invasion of Ukraine and Pakistan’s abstention in the UN General Assembly vote denouncing the Russian war could be an indication of a policy shift towards a more independent Pakistani foreign policy. Such a development could mean closer Pakistani ties with both China and Russia and the forming of a new geopolitical nexus in South Asia. 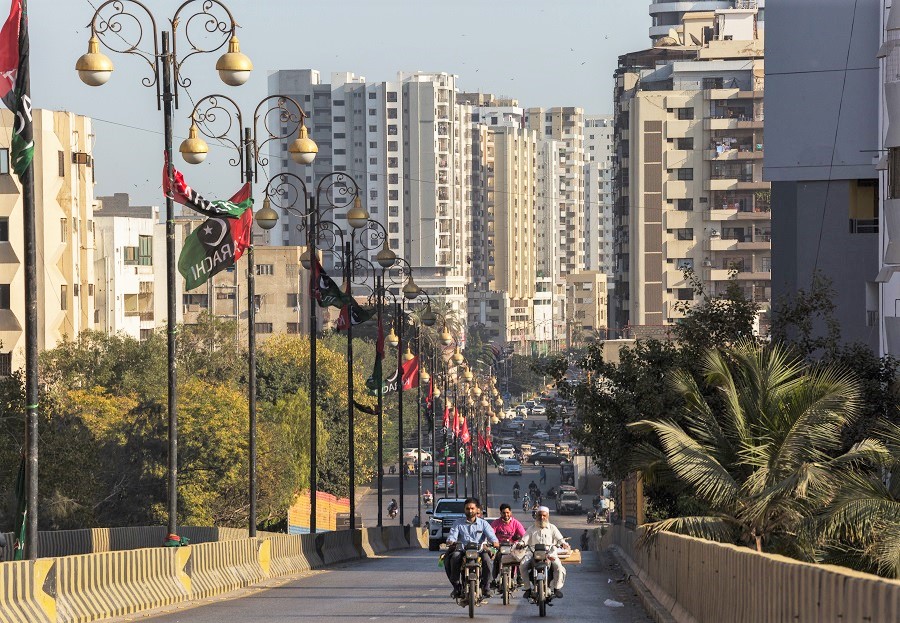 Traffic moves past apartment buildings in the Clifton area of Karachi, Pakistan, on 5 March 2022. (Asim Hafeez/Bloomberg)

Grace Chong - 30 November 2022
With all eyes on Indonesia as the G20 chair, the summit concluded successfully as Indonesian President Joko Widodo deftly balanced the demands of the G20 members amid the Russia-Ukraine war, along with a painstakingly crafted joint declaration that addresses the war. ISEAS academic Leo Suryadinata gives us a look at how Indonesia managed to handle the situation while making it clear that the economic summit is not a platform to discuss security.
Read more
Translated by Grace Chong on 11 March 2022

Despite some critical voices in Pakistan as well as open letters and phone calls by Western countries, Prime Minister Imran Khan went ahead with his long-planned three-day visit to Moscow, the first by a Pakistani prime minister in 23 years. On 24 February, the day that Russian military forces started to invade Ukraine, Russian President Vladimir Putin and PM Khan had a three-hour meeting. PM Khan defended his trip and maintained that mainly bilateral issues were discussed. A Pakistani communique later stated that PM Khan had stressed that the Ukraine conflict was not in anyone’s interests and underlined that disputes should be resolved through dialogue and diplomacy. But he did not condemn Russia’s invasion of Ukraine.

In spite of political pressure from the EU and the US, Pakistan (like its neighbour India) abstained from the vote on the resolution condemning Russia’s invasion of Ukraine during the recent UN General Assembly emergency session. The Pakistani permanent representative did not mention Russia in his speech but underlined that Pakistan “upholds the principle of equal and indivisible security for all”, a reference to Russia’s concerns. PM Khan also slammed Western pressure on Pakistan: “Are we your slaves?” He vowed to remain neutral and work with those trying to end the war in Ukraine.

One of the main bilateral discussion points between Putin and Khan in Moscow was their bilateral economic flagship project, the “Pakistan Stream Gas Pipeline”.

One of the main bilateral discussion points between Putin and Khan in Moscow was their bilateral economic flagship project, the “Pakistan Stream Gas Pipeline”. In 2019, Russia had committed to investing up to US$14 billion in Pakistan’s energy sector. Pakistan has fast declining domestic gas reserves even though gas still remains an important part of its energy mix. In 2015, Russia and Pakistan, therefore, agreed to build a 1,100 km long LNG pipeline from Karachi to supply power plants in the Punjab province with a planned capacity of approximately 12 billion cubic metres. After delays due to US sanctions against one of the three Russian companies involved in the project, a shareholder’s agreement was agreed upon last July and signed in November 2021. Costs are estimated to be around US$2.5 to US$3 billion with Russia financing one quarter of the project and assisting with expertise.

Pakistan had also granted Russia access to its Gwadar port, one of the main hubs for the China-Pakistan Economic Corridor (CPEC) projects. Western sanctions on Russian companies and banks could affect this bilateral project. It was also disclosed after the Khan visit that Pakistan would purchase two million tonnes of wheat as well as natural gas from Russia.

The development of Pakistan-Russian relations has been remarkable considering that for many years during and after the Soviet occupation of Afghanistan and the Cold War, they were frozen. Things began to move after 9/11. Relations between Pakistan and the US became strained and the US started to have a closer relationship with India during the Clinton and Trump administrations.

In 2011, Russia officially supported Pakistan’s bid to join the Shanghai Cooperation Organisation (SCO) emphasising that Pakistan was an important partner of Russia in South Asia and the Muslim world. In 2013, the first Russia-Pakistan Strategic Dialogue was established and in 2014, Russia lifted its arms embargo on Pakistan and began to sell weapons to the country. The Pakistan-Russia Joint Military Consultative Committee (JMCC) has met three times, the last time in September 2021. The annual Pakistan-Russia Inter-Governmental Commission (IGC) on trade, economic, scientific and technical cooperation started its work in 2015. Russia, however, is not among Pakistan’s ten biggest trading partners.

Increasing investment, military and political engagement with Russia is not at odds with Pakistan’s close economic and military ties with China.

Russian Foreign Minister, Sergei Lavrov, visited Pakistan in April 2021, the first visit of a Russian foreign minister since 2012. Before Pakistan, Lavrov had visited India, Pakistan’s arch-enemy and a country with close Russian defence technology ties. The Lavrov visit to Pakistan focused on “cooperation in the trade, economic and counter-terrorism fields and on topical issues of the international and regional agenda". The deteriorating civil war situation in Afghanistan last year was “a common concern” during these talks. Prior to this visit, Russia had hosted a conference in Moscow in March with China, the US, Pakistan, the Afghan government and the Taliban in order to breathe life into the stalled Afghan peace process. Both countries also agreed during the Lavrov visit on joint military exercises and on increasing Pakistan’s ability to fight terrorism. At the time of the visit, Russia was worried about the continuing instability in Afghanistan and recognised Pakistan’s leverage with the Taliban. Russia continues to be concerned about the situation there.

A new tripartite geopolitical centre of gravity in South Asia?

Increasing investment, military and political engagement with Russia is not at odds with Pakistan’s close economic and military ties with China. On the contrary, it seems to complement them. The US$62 billion multi-project CPEC is China’s flagship venture under its Belt and Road Initiative (BRI) through which Pakistan receives Chinese technological know-how and financing to upgrade its power plant infrastructure, stimulate economic growth and develop Pakistan into a regional economic hub. And Russia’s assistance with gas and gas pipelines — assuming China’s consent — will enhance both China’s and Pakistan’s interests.

Pakistani Foreign Minister Shah Mahmood Qureshi had already talked about a policy shift towards an independent Pakistani foreign policy. PM Khan’s visit to Moscow could be a precursor to a pragmatic upgrading of bilateral relations. And closer Pakistani cooperation with both Russia and China could point to a new tripartite geopolitical centre of gravity in South Asia. With new geopolitical alliances evolving, this development will be followed closely by the US, India and other regional and global players.

Related: Pakistan stands to gain from Afghanistan turmoil? | Afghanistan in the calculations of India, Pakistan and China: Is there common ground among rivals and allies? | Afghanistan's role in changing the power balance in Eurasia | Overcoming power imbalances and policy clashes: The quest for a peaceful China-India future | India and Russia remain on opposite sides of the Indo-Pacific’s balance of power