A Singaporean in China: Why I miss Chinese New Year in Singapore

Former journalist Jessie Tan now based in Beijing observes that compared to Singapore’s Chinatown din, nianwei (the Chinese New Year atmosphere) in Beijing seems rather low-key. Like many people living away from home, her identity becomes clearer the further she’s away. She goes in search of some nianwei Singapore-style, even if she wasn’t much of a Chinese New Year fan back home. Perhaps it’s what they say about only missing something when they’re gone? 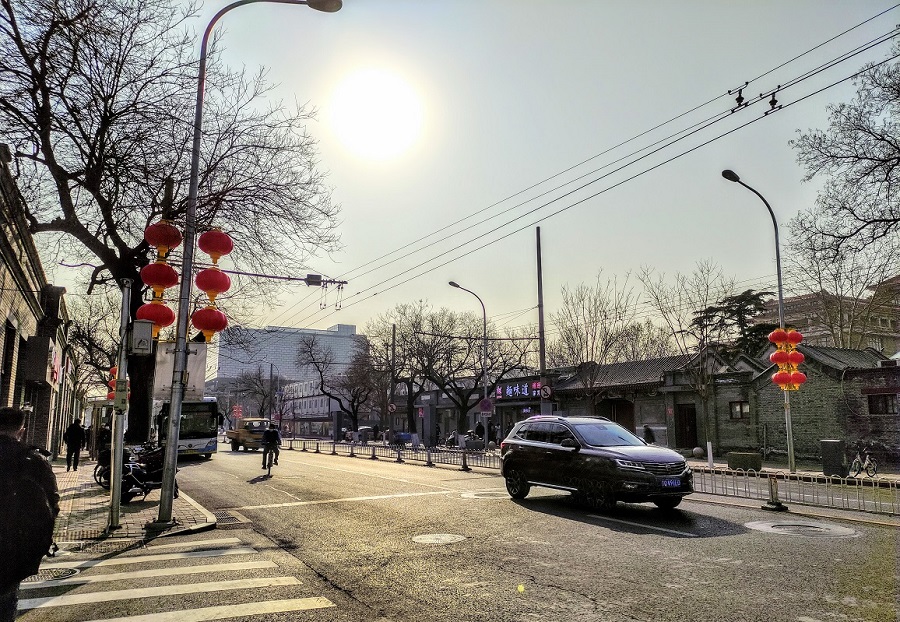 A street in Beijing with just a few lanterns as CNY decorations. (Photo: Jessie Tan)

Grace Chong - 23 November 2022
US academic Wu Guo looks at the recent online furore over the mushrooming of state-run communal canteens in China and offers his views from the US. While providing food for the needy should be part of the state's responsibility, there should also be space for civil society, private enterprises and the public to play a role to create kind and healthy communities.
Read more
Translated by Grace Chong on 26 January 2022

“Oh my goodness, it’s that time of the year again! Dong dong dong dong qiang all day, every day! Those Chinese New Year (CNY) songs are so noisy and annoying,” a friend in Singapore complained. “How are the CNY festivities over in Beijing? Is it even more intense?”

Unfortunately, or fortunately depending on which camp you belong to, no. While the shops in Singapore start to put up red and gold decorations and blast CNY music a day after Christmas, many in Beijing only start decorating half a month before CNY. Even then, we only came across one mall which had elaborate light displays; the rest mainly put up some red lanterns and flowers here and there, but definitely no songs and music signifying the arrival of the biggest festival for the Chinese.

Sadly, due to Covid-19 restrictions, all the traditional CNY events have been cancelled.

Foreigners who resided in Beijing years ago tell of CNY festivities back then like outdoor markets, temple processions and night-long firecrackers and fireworks. Sadly, due to Covid-19 restrictions, all the traditional CNY events have been cancelled. People are also banned from setting off firecrackers and fireworks in Beijing city to reduce pollution and prevent casualties caused by improper use.

“There is no nianwei (CNY atmosphere) at all!” My mother was the first to lament the lack of buzz in Beijing leading up to CNY. In Singapore, she would be jostling with other shoppers for CNY goodies in Chinatown amid the din of stallholders’ hollering, loudspeakers blasting promotions of the day and CNY songs. In the background, gigantic street lanterns in the image of the God of Fortune and the 12 Zodiac animals would light up the bustling street. Outside of Chinatown, neighbourhood markets and malls around the island would also attract crowds with their pop up stalls selling CNY goodies, decorations, bedsheets and clothes.

We did not experience anything of that sort in Beijing last year and were all sorely disappointed. Singaporean friends in Beijing also noticed the lack of CNY atmosphere in Beijing as compared to Singapore. Thus, my husband and I made it our mission to search for nianwei in this city this year.

We first asked our part-time helper, or Ayi (literally Aunt), where we can find nianwei in Beijing. She frowned and paused for a long while, before slowly shaking her head. “Hmm...There are really not many places with nianwei here. It is Beijing, after all!” she said. “When I first spent CNY in Beijing years ago, I was so shocked to see all the streets so empty and quiet! Then an old Beijinger told me, this is the real Beijing. For the rest of the year, this place is just the capital city. That’s why most people prefer to go back to their hometowns for CNY. The festivities and CNY atmosphere there is much better!”

I told Ayi about the ubiquitous CNY music playing in the background back in Singapore which helps to hype people up for the festival. She laughed and said that the private supermarkets in her hometown near Wuhan also play such music, “to remind you that CNY is coming and influence you to buy more things!”

Ayi said she buys her CNY decorations online now and so we too turned to Jingdong and Taobao, two popular e-commerce sites. Instead of searching for nianwei outside, why not create some in our own home? It took me less than a minute to find a dozen online shops selling the same few products, but somehow the feeling was just not right, and after scrolling through the pages for half an hour, I gave up and did not buy anything.

Instead of Mandarin oranges, the Chinese here will exchange food, cigarettes, alcohol and even health supplements with their relatives during CNY.

By a stroke of luck, however, we chanced upon a local wet market near Dongsi the next day and found a little shop tucked away at a corner with bright red CNY decorations hanging all around. Everything was displayed exactly the way it would have been in a similar shop in Singapore. Excitedly, I brisk-walked up to the familiar sight. The husband and I chose one horizontal banner with six cute tigers bearing the words Wu Fu Lin Men (five blessings descend upon this home), another big Fu (blessings) surrounded by more tigers and four paper-cutting decals for our living room and bedroom windows.

With the home decorations settled, I turned my attention to buying some Mandarin oranges. CNY is never complete without Mandarin oranges back in Singapore. Every visit to a relative’s place starts and ends with the exchange of oranges and auspicious greetings. Hence, I was very surprised when I found out that many Chinese in other parts of the world do not have the same tradition. Instead of Mandarin oranges, the Chinese here will exchange food, cigarettes, alcohol and even health supplements with their relatives during CNY. And of course, they also greet each other with auspicious words.

Once again, I ditched plans to buy the oranges online and visited a bigger local market with two other Singaporean friends. These excursions for CNY decorations and Mandarin oranges were refreshing because I was never this enthusiastic about CNY in the past. In fact, this is my first time buying and putting up decorations for my home. My husband and I bought our matrimonial home in 2015 but we never really took the effort to decorate it on special occasions. It was too troublesome and I was too lazy. For some years, we even forgot to buy Mandarin oranges until CNY eve.

Finding a way to connect to Singapore

To be really honest, CNY is my least favourite festival and I guess that explains the lack of enthusiasm in the past. Hence, I was surprised by my own excitement this year. Other than to make my mother happy, I wonder if my earnestness was due to the fact that I wanted to feel connected to Singapore.

While some people may describe Chinese Singaporeans as part of the Chinese diaspora given how our ancestors came from China, I identify more with the Singaporean culture more than the current Chinese culture.

I believe that if I tell a Beijinger there is no CNY atmosphere here, they might protest. They have their own ways to usher in the new year too. For example, the whole family will gather together to wrap dumplings while watching the CCTV Spring Festival Gala on the eve of CNY, and they will enjoy these dumplings on the first day of CNY, followed by noodles on the second day of CNY.

...the things that I never bothered with in the past, the very differences I observe that sets us apart from the other Chinese, became the only connection to home thousands of miles away.

But these are not what we grew up doing in Singapore. CNY in Singapore is outrageous red decorations, rambunctious songs that stay in your head longer than welcomed, and holding on to two oranges while walking across the carpark in a carefully chosen new outfit to your relative’s house, looking forward to a boisterous lohei session and a cozy steamboat dinner.

In China, the CNY traditions of the northern and southern Chinese vary even in this age. It is no wonder then that Singaporeans do things differently from our Chinese counterparts — our way of life is the result of old traditions that have developed independently over time from the original culture.

So, when our family cannot go back to Singapore to celebrate CNY for two years in a row because of Covid, perhaps the things that I never bothered with in the past, the very differences I observe that sets us apart from the other Chinese, became the only connection to home thousands of miles away.

Eventually, we found a mega mall with two long rows of CNY decorations distributors. My mother had a merry time shopping and soaking up the nianwei, though there was not much of a crowd and no CNY music to compel one to shop more than necessary.

That night, we put up all our CNY decorations while my bluetooth speaker played the playlist “Classic Chinese New Year Songs” on Spotify. My children jumped, twirled and danced to “dong dong dong qiang” and “gong xi gong xi gong xi ni”.