This week’s Global Financial Leaders' Investment Summit in Hong Kong was an effort by the Hong Kong government to restore its position as a financial hub, which has been somewhat weakened due to China’s pandemic measures and other global responses. But despite John Lee’s optimistic address at the summit, the actual situation appears to be less than rosy, with several adopting a wait-and-see attitude. 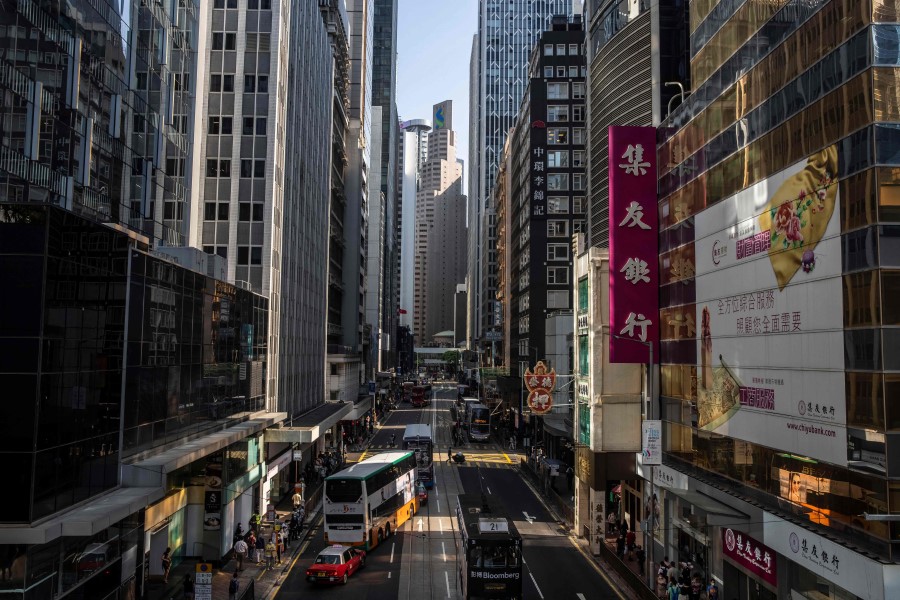 Candice Chan - 28 November 2022
Often referred to as the world’s economic “canary in the coal mine”, South Korea has seen its economy tumble over the past year, impacted by external factors such as US interest rate hikes and signs of recession in key trade partners. The accumulation of domestic factors — currency crisis, tumbling stock market and rising inflation — is also hitting the South Korean economy hard. However, this industrial powerhouse has the domestic means to climb out of the doldrums.
Read more
Translated by Candice Chan on 4 November 2022

This week, the Hong Kong Monetary Authority (HKMA) held the Global Financial Leaders' Investment Summit with the sole mission of bringing Hong Kong back to the international financial stage. Attended by financiers from Hong Kong, mainland China, and Wall Street, it was Hong Kong’s first large-scale in-person financial meeting in nearly three years of the pandemic.

The three-day conference opened on 1 November with a welcome dinner at the M+ museum in the West Kowloon Cultural District. The summit the next day at the Four Seasons Hotel included discussions on the uncertainty in financial markets due to stagflation and rising interest rates, sustainable finance, and innovation in finance. On 3 November, the event ended with a day of “Conversations with Global Investors”, co-organised with the Hong Kong Academy of Finance.

HKMA Chief Executive Eddie Yue said the summit attracted some 250 participants from over 100 international financial institutions, with over half coming from overseas, and about 40 attendees of CEO and chairman level. Heavyweights included James Gorman, chairman and CEO of Morgan Stanley; Colm Kelleher, chairman of UBS Group AG; David Solomon, CEO of Goldman Sachs; and Jin Liqun, president and board chairman of the Asian Infrastructure Investment Bank (AIIB).

These flexible arrangements show that the Hong Kong government wants to revive Hong Kong’s financial status through the summit.

Hong Kong has not completely lifted its Covid-19 border measures. While there are no hotel quarantines, a three-day self-monitoring period is still required. However, the organisers made an exception for the meeting, allowing attendees to dine together in an enclosed space during the three-day window.

These flexible arrangements show that the Hong Kong government wants to revive Hong Kong’s financial status through the summit. Speaking at the summit on 2 November, Hong Kong’s Chief Executive John Lee confidently said: “The worst is behind us.” While Hong Kong has gone through many difficulties, it remains resilient.

Lee called this the "Hong Kong Onstage Again Summit", noting that Hong Kong’s unique advantages make it an irreplaceable connection between the Mainland and the rest of the world. He called on the financial sector to seize the opportunity: “This is the moment you've been waiting for.”

However, before the summit opened, quite a few dramatic incidents occurred.

On the day of the summit, with Tropical Storm Nalgae approaching, the Hong Kong Observatory raised the No. 8 storm signal, with workplaces and schools and the stock market all halted.

... attending the summit “only serves to legitimise the swift dismantling of Hong Kong’s autonomy, free press, and the rule of law by Hong Kong authorities acting along with the Chinese Communist Party.” — Jeff Merkley and Jim McGovern, co-chairs, Congressional-Executive Commission on China

The summit was also politicised. On 17 October, 20 Hong Kong human rights groups headquartered in the US released a joint statement urging the US government to warn the Wall Street financial leaders attending the summit that their participation might lead to legal and regulatory consequences.

Ten days later, Congressional-Executive Commission on China (CECC) co-chairs Jeff Merkley and Jim McGovern released a statement saying that attending the summit “only serves to legitimise the swift dismantling of Hong Kong’s autonomy, free press, and the rule of law by Hong Kong authorities acting along with the Chinese Communist Party.”

The statement emphasised that John Lee is under US sanctions and attending the summit would be giving “political cover”, while participation “makes them complicit not only in human rights abuses in Hong Kong but also in the Chinese government’s efforts… at ‘actively undermining the democratic political processes of other countries and exporting an illiberal model of international order’”. It urged them to reconsider their decision to attend the summit.

An op-ed in the Wall Street Journal described the attendees as “kowtowing” to John Lee, which did not help to raise their reputation or those of their banks.

However, even under various pressures, the Hong Kong government managed to hold the summit as planned.

Downward pressures on the economy

Since the pandemic broke out in 2019, Hong Kong has adopted strict epidemic prevention and control measures. Even after various countries and regions started to reopen and ease entry restrictions, Hong Kong stayed the course with the view to reopening its border with the mainland as soon as possible. It was not until late September this year that Hong Kong removed its hotel quarantine policy and replaced it with a three-day health monitoring.

This has resulted in complex procedures and long quarantine periods for foreign investors, making taking a trip to this financial hub less appealing. Some foreign capital have even withdrawn their investments because of this. At the same time, strict anti-Covid measures have dealt a big blow to Hong Kong’s key economic industries of services and finance.

... Hong Kong’s share of regional IPOs is hovering near the lowest in over two decades, as overall IPOs for the year have slumped 74%.

Advance government data shows that the Hong Kong economy has shrunk for a third consecutive quarter, contracting 4.5% year-on-year in the third quarter, the deepest contraction since the second quarter of 2020.

Bloomberg reported that at a time when global initial public offerings (IPO) have cooled considerably, Hong Kong’s share of regional IPOs is hovering near the lowest in over two decades, as overall IPOs for the year have slumped 74%.

The report added that with Beijing’s tightening grip on Hong Kong, some wealthy Hong Kongers are thinking of setting up wealth offices in Singapore, which may slow down Hong Kong’s asset and wealth management industry. Data from the Securities and Futures Commission shows that assets managed in Hong Kong only rose 2% in 2021 after a 21% jump the year before, while private banking and wealth assets fell 6% to HK$10.6 trillion (US$1.4 trillion).

Moreover, Hong Kong’s workforce has shrunk by about 140,000 in the past two years, with large enterprises finding it difficult to recruit talent. According to a Hong Kong Investment Funds Association survey, more than a third of fund management companies have moved some or all regional and global roles to other places. Nearly 70% of respondents also said that it was “extremely difficult” to hire and retain expatriates in Hong Kong.

Shrinking GDP, foreign capital withdrawal, and brain drain as a result of the city’s political turmoil in recent years have weakened Hong Kong’s competitiveness. Resigning to one’s fate is no way out, and the city’s financial summit is a way in which the Hong Kong government is fighting to prove that Hong Kong still has its competitive edge.

“The overall feedback we got was: Thanks, but call us when you are actually opened up.” — Johannes Hack, President, German Chamber of Commerce Hong Kong

Will the summit achieve its mission?

However, business leaders told The Wall Street Journal that the summit and the Hong Kong Sevens rugby tournament aimed at reaffirming Hong Kong’s financial status may not achieve their desired results, and views elsewhere have been mixed.

Commenting on business travel to Hong Kong, Johannes Hack, president of the German Chamber of Commerce Hong Kong, said, “The overall feedback we got was: Thanks, but call us when you are actually opened up.” In his view, “no one can come to Hong Kong with the peace of mind that their schedule won’t be impacted” if anti-Covid restrictions remain.

A 2 November commentary in Ming Pao noted that even if "Hong Kong is back”, the external environment has changed. As such, the real test lies in moving past the short-term problems of Covid restrictions, and tackling the larger challenges in moving forward. The article compared the summit to a burst of fireworks — a single sparkle would not be enough to solidify Hong Kong’s status as an international financial centre.

Hong Kong remains a tour de force of the financial world and shines as a “super-connector” between mainland China and the world. — Mary Callahan Erdoes, CEO, JPMorgan’s asset and wealth management division

Oxford Economics senior economist Lloyd Chan told Bloomberg, “Foreign banks are still keen to do business or explore opportunities in mainland China and Hong Kong. However, banks will still have to grapple with a business environment that continues to be uncertain and challenging, as strained relations between US and China imply economic and financial risks, which they have to be watchful of.”

However, Mary Callahan Erdoes, CEO of JPMorgan’s asset and wealth management division, told South China Morning Post in an exclusive interview that Hong Kong remains a tour de force of the financial world and shines as a “super-connector” between mainland China and the world.

It remains to be seen whether this financial summit will inject a dose of stability into Hong Kong and become the starting point for the city’s return to glory. However, notwithstanding the US’s warnings against attending the summit and Hong Kong’s existing Covid restrictions, over 250 financial leaders still attended the summit. This reflects that the international financial community remains positive about Hong Kong’s unique advantage of having close links to mainland China and is still confident in this financial centre, as it anticipates the day when Hong Kong emerges from the pandemic and returns to the international financial stage with a whole new look.

This article was first published in Lianhe Zaobao as “下午察：金融峰会能否重振香港金融地位？”.