A Joint WHO-China Study Team report has said that it is "extremely unlikely" that a Wuhan laboratory leak was the origin of the Covid-19 pandemic. Yet the US and other countries have cast doubts on the report, citing delay and access issues. China hit back, labelling this as another smear campaign. With each side singing their own tune, are the report results of any consequence? 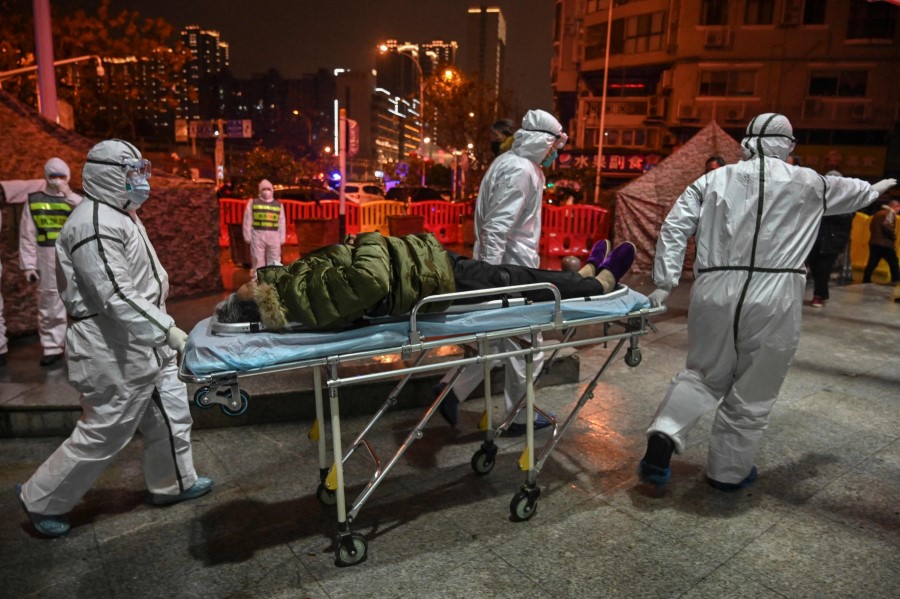 In this file photo taken on 25 January 2020, medical staff members wearing protective clothing to help stop the spread of a deadly virus which began in the city arrive with a patient at the Wuhan Red Cross Hospital in Wuhan. (Hector Retamal/AFP) 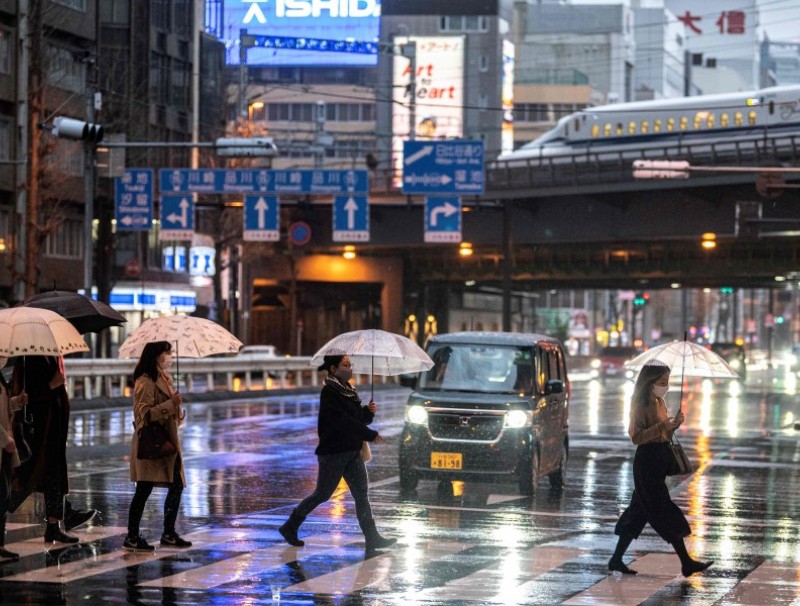 Balancing China: Can Japan continue to be a reliable power in SEA after Abe?

Candice Chan - 24 March 2021
Academic Victor Teo says that Japanese Prime Minister Suga Yoshihide has big shoes to fill as his predecessor Shinzō Abe had made visible and significant achievements on both the domestic and diplomatic fronts. With the Biden administration in place in the US, and a rising China amid a post-pandemic world, how will Suga's Japan engage Southeast Asia? Will he reaffirm the “silent” leadership role that Japan has played in the region through economic and security means? Furthermore, Japan has guided the US in regional matters during Trump's presidency and has been keen to include Southeast Asian countries in the Quad. Can Japan fulfil its security goals without seriously antagonising China?
Read more 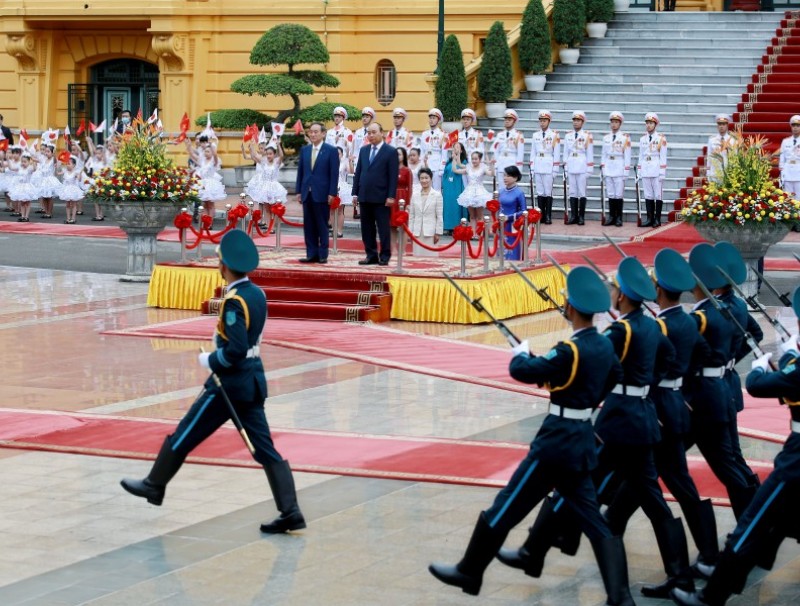 Candice Chan - 24 March 2021
Vietnamese academic Huynh Tam Sang notes that Japan’s economic and security concerns are becoming increasingly intertwined with those of Southeast Asia, and Tokyo sees Vietnam as the gateway for projecting its influence in Southeast Asia. Furthermore, Japan seeks to bolster its security and defence relationship with Vietnam, and does not rule out the possibility of Vietnam being a Quad-Plus member.
Read more Candice Chan - 22 March 2021
The Quad comprising US, Japan, Australia, and India is still in its early days. Some fear it could become an “Asian NATO” targeting China, but how likely is this, given the region’s history of multilateralism in the security arena? Japan-based academic Zhang Yun examines the issue.
Read more 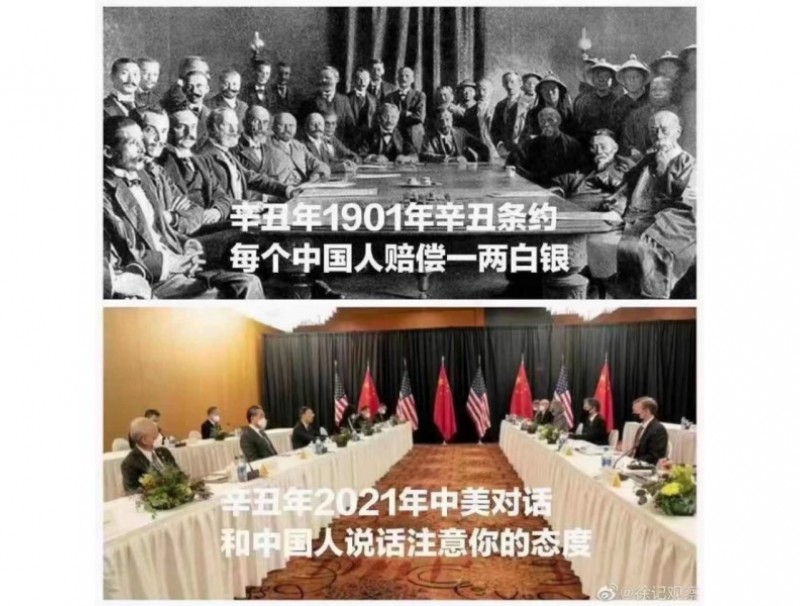 Alaska meeting: A historic moment of China standing up to the West?

Candice Chan - 22 March 2021
Zaobao correspondent Yu Zeyuan notes the fiery start to the high-level dialogue between China and the US held in Alaska, with both sides trading barbs. However, amid the aggression and the "catharsis" some Chinese netizens felt from China standing up to the West after 120 years, some real communication did take place between the two countries where substantive issues were discussed.
Read more 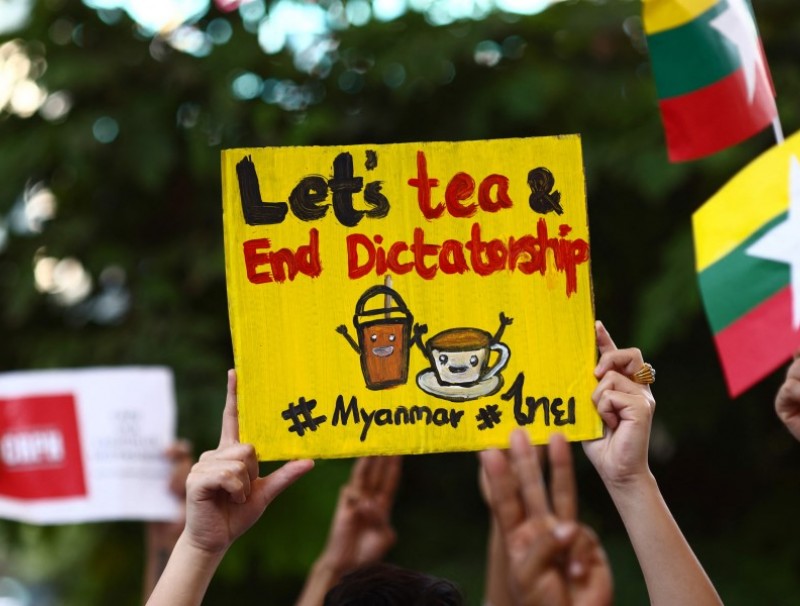 Candice Chan - 17 March 2021
Social media movements such as the Milk Tea Alliance are tapping into discontent with the regional decline of democracy and fears about the rise of China as a hegemonic power. ISEAS visiting fellow Quinton Temby explains why anti-China sentiments are gaining traction and how it is affecting local politics.
Read more
Translated by Candice Chan on 1 April 2021

On 30 March, the World Health Organization (WHO) released the Joint WHO-China Study report on the origins of the coronavirus, concluding that it was “extremely unlikely” that the coronavirus leaked from a laboratory in Wuhan. On the surface, this is a result that China would be happy with  — erstwhile criticised by the West for a lack of transparency, Beijing would now have some breathing room and be relieved of some international pressure.

However, the findings of the report were soon questioned by the West, with the US and 13 of its allies releasing a joint statement criticising Beijing’s lack of transparency. WHO’s director-general Tedros Adhanom Ghebreyesus also made a rare comment against China, noting that the WHO experts had faced difficulties in accessing raw data. Such remarks are taking the focus away from the investigation results; China and the West are not changing their opinions, the world is no closer to the truth, and right now it seems like nothing will change.

In January and February, the WHO-led expert team carried out investigations in Wuhan, where the coronavirus was first detected. The report said the coronavirus started spreading from late September to early December 2019, that it could have come from bats and been introduced to humans via an intermediate host or the cold food chain, and that a laboratory leak was “extremely unlikely”. This is consistent with the results announced by the WHO team in Wuhan on 9 February.

The Chinese foreign ministry quickly acknowledged the report in the late hours of 30 March, commending the Chinese and international experts who took part in the study. A foreign ministry spokesperson said China “offered necessary facilitation for the team's work, fully demonstrating its openness, transparency and responsible attitude”, and warned that politicising the issue would only “severely hinder global cooperation in study of origins, jeopardise anti-pandemic cooperation, and cost more lives”.

The Biden administration, which has frequently questioned the independence of the WHO’s investigation, has continued to exert pressure. On 30 March, the US and 13 other countries, including the UK, Canada, Australia, Japan, and Korea, voiced their “shared concerns that the international expert study on the source of the SARS-CoV-2 virus was significantly delayed and lacked access to complete, original data and samples”.

White House press secretary Jen Psaki said the Biden administration was still reviewing the report and that it gave “a partial and incomplete picture”. She added that China has neither been transparent nor provided underlying data and its actions did not qualify as cooperation. Last month, the US had already suggested that it would not accept the WHO’s findings and would draw on the information collected and analysed by the US intelligence community to evaluate the report. White House national security adviser Jake Sullivan has called on China to “make available its data from the earliest days of the outbreak”.

Amid a highly confrontational and intense international political atmosphere, the WHO’s investigations are tantamount to a game where both teams are only willing to recognise one result and do not trust the referee.

Tedros seemed to be knocking his own organisation by admitting the difficulties the WHO team encountered in accessing raw data. He added: “I expect future collaborative studies to include more timely and comprehensive data sharing.” His remarks confirm the validity of the concerns by the US and its allies, further denting the credibility of the report.

In an interview with US media prior to the release of the report, former director of the Centers for Disease Control and Prevention Dr Robert Redfield revived the theory that the source of the virus was likely a laboratory in Wuhan. In response to speculations in Chinese public opinion last year that the virus originated from the US Army Medical Research Institute of Infectious Diseases (USAMRIID) at Fort Detrick and was carried to Wuhan when US military participated in the Military World Games in October 2019, Chinese foreign ministry spokesperson Hua Chunying questioned on 30 March, “So when will the US biological base at Fort Detrick, with a big question mark over it, allow international experts in for a visit?”

As for the joint statement released by 14 countries, Hua rebutted that this showed clearly their “disregard for science and political manipulation of [the] study of origins”. Further, it was “deeply immoral to politicise [the] study of origins in this way”; such behaviour was antithetical to the “international community's aspiration for solidarity against the virus” and “such attempts will not succeed”.

A game where there is only one outcome

Amid a highly confrontational and intense international political atmosphere, the WHO’s investigations are tantamount to a game where both teams are only willing to recognise one result and do not trust the referee. Thus, the findings of the investigations become of little importance; they cannot alter the environment of hostility and distrust between China and the West and only put the big countries’ offensive and defensive strategies in play.

... in a climate of intensifying confrontation between China and the US, the report highlights the powerlessness of international organisations and science in the face of political tussles...

However, it is also not the case that the US and China do not have room to manoeuvre on the issue of the origins of the virus. US Secretary of State Antony Blinken said they had “real concerns about the methodology and the process” of the report, “including the fact that the government in Beijing apparently helped to write it”. However, he said in not so many words that the US would not take punitive action against China in a markedly different approach from that of the Trump administration.

While the overall tone of Blinken’s speech suggests that the US has not softened its stance towards China, there seems to be flexibility on the pandemic issue and the door for cooperation and negotiations with China on the topic is still open. The EU, which locked horns with China last week over the Xinjiang issue, released its own statement affirming the WHO’s report as a “helpful first step”, while expressing similar concerns as that expressed in the US-led joint statement. Nonetheless, this is still an act of goodwill to China.

These mildly positive signals aside, in a climate of intensifying confrontation between China and the US, the report highlights the powerlessness of international organisations and science in the face of political tussles, and the fact that the WHO is being pulled by both camps like a tug of war. Regardless of whether the report proves that the coronavirus came from the Wuhan lab, the West’s distrust of China will not go away, and the US will not easily retract any of its tough measures against China. At the same time, the report will also not alleviate China’s aversion to the US and the West or its instinct to be on guard against them. As China and the West continue to stand their ground, the world continues to wait for a turning point.

Related: Was WHO dancing to China’s tune in its responses to the pandemic? | China and the US spar over origin of Covid-19 | So who leaked the virus? The resurrection of conspiracy theories | China faces avalanche of calls for coronavirus compensation