Zaobao's Beijing correspondent Yang Danxu often marvels at the spending power of Chinese white-collar workers around her, and she too was surprised when Chinese Premier Li Keqiang remarked that China has 600 million people with a monthly income of 1,000 RMB. That is more than 40% of the Chinese population, and the figures portray a reality that is starkly different from common perception. Are Chinese people moving up the income ladder and are their lives becoming better as is the common refrain? Yang examines the facts. 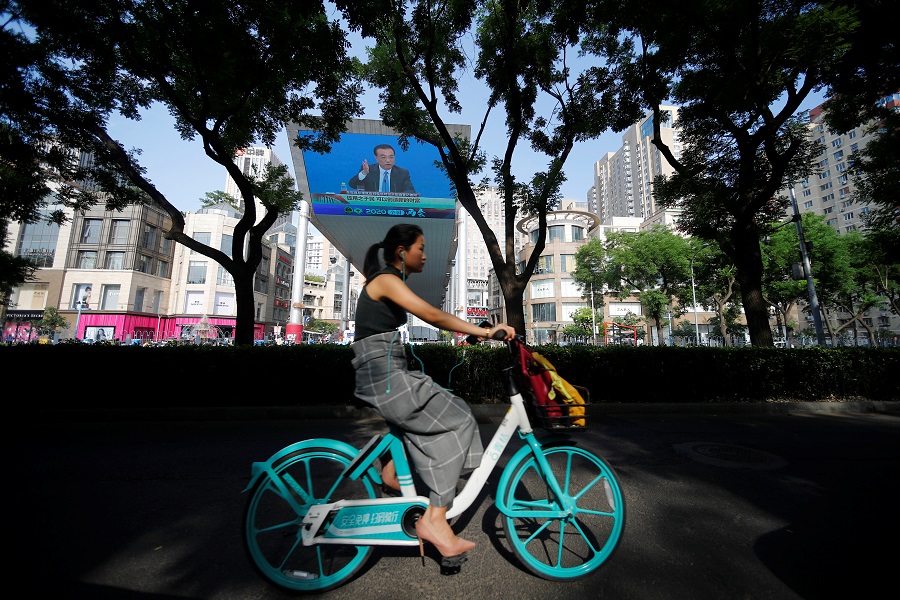 A woman cycles past a screen showing a news conference by Chinese Premier Li Keqiang after the closing session of the National People's Congress, in Beijing, China, on 28 May 2020. (Thomas Peter/Reuters)

Grace Chong - 27 January 2023
Regulators are ramping up efforts to cull poorly performing firms and those that violate the rules or break the law. A record number of companies got the boot from Chinese mainland stock exchanges last year, and that number could even double in 2023.
Read more
Translated by Grace Chong on 3 June 2020

When I first arrived in Beijing, I often complained to my friends in Singapore about the high cost of living in Beijing.

Our office is situated in an office building at the Dongzhimen area. Every afternoon, white-collar workers in the building dine at the shopping malls nearby. Those who are keen to save some money would have a simple meal in the basement. But lunch easily costs around 50 RMB (S$10), and for those who are feeling a little extravagant and decide to have their lunch at the restaurants in the upper floors, it is common for them to pay an average of 120 RMB to 150 RMB for a meal.

I am always curious over one thing: how much must they earn each month to support such a lifestyle?

After lunch, some of these white-collar workers would buy imported fruits from the supermarket in the mall, or take away a cup of internet-celebrity-endorsed milk tea or Starbucks coffee to enjoy later at their desk. As a rough estimate, over 2,000 RMB can be spent on lunch each month.

Looking at the fashionable clothes they wear to work, the branded bags they carry, the various entertainment venues they go to, the internet-celebrity-endorsed cafes they frequent, the latest phone models they always seem to have, and perhaps even the sky-high housing rentals or loans they are paying in Beijing, I am always curious over one thing: how much must they earn each month to support such a lifestyle?

"Their monthly income is barely 1,000 RMB. It’s not even enough to rent a room in a medium Chinese city. And because of Covid-19, many families have encountered difficulties.” - Chinese Premier Li Keqiang

It is no longer news that the Chinese are getting richer. But Chinese Premier Li Keqiang made a shocking remark at a press conference following the closing session of the National People’s Congress meeting: China has 600 million people with a monthly income of 1,000 RMB.

That was Li’s response to a question about poverty alleviation. He said without mincing his words, “Our country is a developing country with a big population. The per capita annual disposable income in China is 30,000 RMB. But there are still some 600 million people earning a medium or low income, or even less. Their monthly income is barely 1,000 RMB. It’s not even enough to rent a room in a medium Chinese city. And because of Covid-19, many families have encountered difficulties.”

He thus emphasised the importance of securing people’s livelihoods after the pandemic subsides and placed meeting the “essential needs of vulnerable groups and those families who have encountered new difficulties because of Covid-19” at a “very high priority on the government’s work agenda”.

Some netizens even find it hard to believe, and wonder if Li made an error at the press conference.

This speech comes as a rude shock. It is China’s plan to end poverty and build a moderately affluent society this year. While a monthly income of 1,000 RMB is above China’s official poverty line, that some 600 million people are at this lower-income level seems to contradict the saying that the Chinese are becoming richer. Chinese leaders rarely “expose their scars” under the spotlight, and in so doing, reveal another side of China to the masses. This is surprising to the people who are accustomed to hearing the mainstream narratives of China’s rise and its wealth creation miracle.

The bigger impact of this set of numbers comes from the facts behind it — it is starkly different from even what the ordinary Chinese citizen perceives it to be.

Chinese netizens dislike various statistics and reports about income and assets the most. Whenever such numbers are released, they would say that these figures are a “bluff”. Many netizens would also claim that they are “being averaged out” (被平均), clearly implying that the statistics are making the Chinese seem richer than they actually are and are at odds with their perceived objective facts. It is the total opposite this time: nobody thinks that the facts have been manipulated. Some netizens even find it hard to believe, and wonder if Li made an error at the press conference.

The extent of their wealth is jaw-dropping even to foreigners.

Indeed, China has experienced rapid development in over 40 years of reform and opening up. Its economy is already the second largest in the world and its GDP per capita has exceeded US$10,000 last year. China’s economic development is evidenced by its rapid “consumption upgrade” (demand for high-quality goods and services), the proliferation of various commercial districts in the cities, busy streets filled with vehicles, and latest phone models used by commuters on the trains.

Prior to the outbreak of the coronavirus, the Chinese were also the top spenders of international consumer markets and could be seen snapping up branded bags in Europe, cosmetics in Korea, and rice cookers in Japan. The extent of their wealth is jaw-dropping even to foreigners.

What does it mean to be earning a monthly salary of 1,000 RMB? It may not even be enough for a Beijing white-collar worker to pay for a month’s worth of lunch. A woman wanting to look good can only afford one dress from a Beijing mall. It is only enough to pay for a half-day excursion around the suburbs of Beijing for an entire family with kids. A monthly salary of 1,000 RMB is unimaginable to many people living in first- and second-tier cities. But even more unimaginable is the fact that such an enormous number of people in China are surviving on so little. No wonder so many people find it surprising.

Thus, are the Chinese rich or not? In a country where stages of development are uneven; there are large disparities between cities and the countryside, and across regions; and where there is a wide income gap, this is indeed difficult to answer. In a population of 1.4 billion, some choose to splurge to live a decent life, while others are suffocating under the immense pressure of property prices and their child’s milk powder and school fees. Some live a middle-class life in first- and second-tier cities, while others living in the mountainous areas of western China worry about having enough food to eat and clothes to wear. The fact that 600 million Chinese are earning 1,000 RMB a month is perhaps just a situation that China cannot ignore at the present stage.

The Chinese society’s discussion of 600 million Chinese earning 1,000 RMB a month comes as a timely reminder to not neglect what’s happening domestically...

In recent years, China has been sending signals of “becoming richer and stronger” to the international community. It has also actively participated in international activities and projected its influence as a major power. The Chinese society’s discussion of 600 million Chinese earning 1,000 RMB a month comes as a timely reminder to not neglect what’s happening domestically and to shift its focus to issues related to the livelihoods of hundreds of millions of Chinese.

The Chinese leaders have wanted badly to fulfil their poverty alleviation mission, and have continued to keep their focus and resolve despite facing tough economic challenges brought about by the Covid-19 pandemic. A discussion on "600 million Chinese earning 1,000 RMB a month" at this juncture provides a much-needed reality check.