Are ‘slit eyes’ an insult to China?

Recent advertisements in China featuring slit-eyed models have been criticised by netizens for “insulting” or “uglifying” the Chinese. But are Chinese people “unworthy” to be Chinese because they fit into so-called Western stereotypes of what Chinese people look like? Are detractors not buying into the very ideas that they want to reject, that Chinese people who look a certain way are “ugly”? Zaobao's China Desk examines the issue. 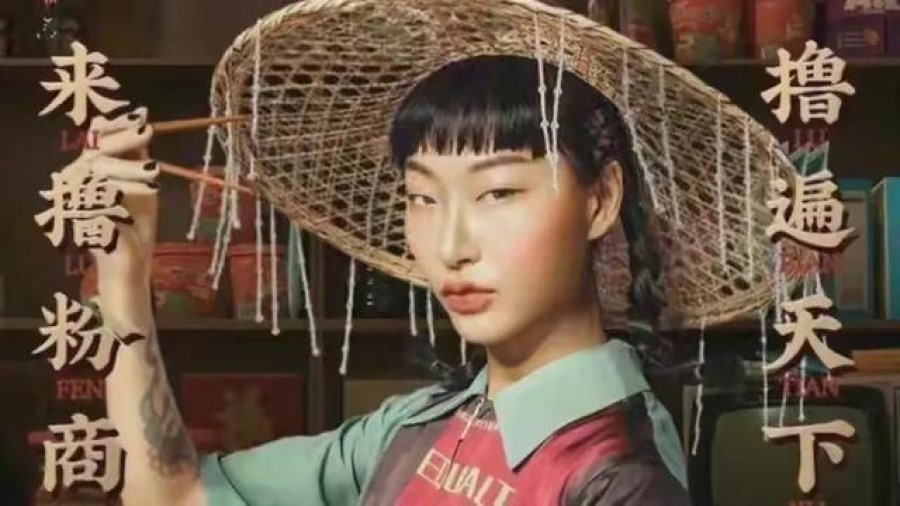 Candice Chan - 30 January 2023
A mall in Shenzhen came under fire for putting up white lanterns with black text as part of its Chinese New Year decorations, while an “ugly” rabbit-shaped light decoration was removed from another mall in Chongqing. Academic Zhang Tiankan muses on tradition and innovation, and the evolution of traditional decorations.
Read more
Translated by Candice Chan on 29 December 2021

Overnight, Chinese social media was flooded with the term “slit-eyed”, thanks to which popular Chinese online snack brand Three Squirrels was berated and this became the second hottest story on the list of hot searches.

It all started when netizens shared a series of Three Squirrels publicity posters for food products such as hot and sour rice noodles and luosifen (螺蛳粉, lit. river snail rice noodles). In the end, no one was interested in the products; instead, the focus was on the advertisement model’s “slit eyes”, which some netizens thought smacked of ugly Chinese people, and huge outrage ensued on Weibo.

The other camp, on the other hand, defended the advertisements, saying aesthetics covered a wide spectrum and there was no need to make a big deal of it. They declared that “the so-called patriots have gone mad”, and should not have such fragile egos. A great country should have confidence in its own culture, but “why is it that the bigger and more powerful, the stronger the feeling of inferiority?”

On 26 December, Three Squirrels issued a statement apologising for the incident, saying that the product went online in October 2019, and the makeup for the model — who is Chinese — was done based on her unique personal features, and was “not meant to intentionally uglify" her, adding that the webpage was changed to avoid creating discomfort.

This case shares almost identical circumstances to a previous incident involving Dior; both have been accused of insulting slit-eyed Chinese, and both involved old works that were dug up and criticised. The difference is that in the previous case it was a Western brand and Dior photographer Chen Man was the one who apologised, while this time it is a Chinese brand, and it was the company Three Squirrels itself that apologised.

Coincidentally, the new Chinese animated movie I Am What I Am (雄狮少年) was also criticised by netizens on similar grounds.

In a rare move, the model in the Three Squirrels posters spoke out against the big fuss kicked up by netizens which generated more heat.

On the night of 26 December, a Weibo user “Cai Niangniang” (菜孃孃) posted that she was the model in the controversial Three Squirrels image. Addressing the comments people have been making, she explained she was born with small eyes and that it was her personality and style that landed her the assignment, and it was not her intention to insult the Chinese.

She said she felt helpless about the online comments. "I don't know what I did wrong, to invite such online violence." She stressed that she was just an ordinary working person doing her job.

Cai asked: "Am I not fit to be Chinese just because my eyes are small? Was I an insult to Chinese people the day I was born? Can I sue you for discrimination?"

She said she definitely loves China, but strongly criticised netizens for "making a big deal of everything. That is sick!"

China has a population of 1.4 billion people. Among them are beautiful women with big eyes like Vicki Zhao, and also gorgeous women with narrow eyes like Zhou Dongyu.

However, there were also some netizens who said that despite the model’s comments, some things could not be  compromised such as the need to use Chinese standards to set the Chinese image. Three Squirrels might have been misguided by Western biases, or perhaps they were preoccupied with the need to cater to the overseas market, “and what was wrong with the anger from consumers and the Chinese public?”

The incident also drew the attention of the Shanghai Consumer Council, which released a statement on 27 December saying that aesthetics in the consumer industry also have to move with the times. “Society is developing and consumer spending is evolving, so businesses have to keep up with the times in matching consumers’ new aesthetic requirements, in order to build cultural and emotional identification among consumers.”

it does not follow that small eyes are necessarily “bad” or that it is intended to be an insult. The stronger the Chinese people react, the more apparent their lack of self-confidence.

Aesthetics have to move with the times, but first it has to be established that there is more than one yardstick for beauty, as everyone has different tastes.

China has a population of 1.4 billion people. Among them are beautiful women with big eyes like Vicki Zhao, and also gorgeous women with narrow eyes like Zhou Dongyu. The controversy involving individual aesthetic tastes makes the question of what constitutes “humiliating China” debatable.

"...It is so ridiculous that we are actually making a mountain out of a molehill.” - a netizen

Westerners may have a certain stereotypical image of Eastern people — internationally-acclaimed Chinese supermodels Lü Yan and Ju Xiaowen are representative of beautiful Chinese women with narrow eyes. Or perhaps as a result of differences in Eastern and Western aesthetics, supermodels whom Eastern people consider “ugly” could be drop dead gorgeous to Caucasians.

But even if East Asians are assumed to be slit-eyed, it does not follow that small eyes are necessarily “bad” or that it is intended to be an insult. The stronger the Chinese people react, the more apparent their lack of self-confidence.

In the words of a Chinese netizen on Weibo, “Just because the Westerners are using small eyes to humiliate you, you take it to heart, lest you also insult China. Then what if they use big eyes to insult you next time? Will you react similarly? You are throwing away your right to set your own standard!”

Another netizen said, “We should just be ourselves and live our life however we want. Why care about what the foreigners say? It is so ridiculous that we are actually making a mountain out of a molehill.”

Although the model was innocently targeted for her makeup and appearance, the brand gained a lot of recognition and airtime.

As The Paper’s commentary “Quit Being Fixated on Small Eyes” (别只盯着“小眼睛” ) said, what began as opposing Western discrimination against the Chinese turned into appearance-based discrimination among the Chinese and “an insult to China”, which is simply absurd. “As long as it’s not to satisfy Western prejudices, what’s wrong with models having small eyes?” the commentary said.

He said, “I do not believe the company and the model have a motive to ‘insult China’ from within.” He thought it was a problem of “aesthetic disconnection” and did not rule out the possibility that “the company has been affected by the standards set by the West on aesthetics regarding China”.

Hu also pointed out that when Westerners say that the Chinese are slit-eyed, “some speak out of contempt and others out of humour and not necessarily maliciously." He added, “When we present Chinese people with small eyes, it could mean confidence or self-mockery. I think they are all fine. But if we quarrel among ourselves along the line of “China versus the West” and make a big issue out of it, it is truly unnecessary.”

There were also netizens who questioned if this was all gimmicky marketing. Although the model was innocently targeted for her makeup and appearance, the brand gained a lot of recognition and airtime.

Foreign brands may resort to such gimmicks, but it is difficult for Chinese brands to benefit from it. While it may gain much airtime in the short-term, the brands would be permanently damaged.

In the words of a commentary on sohu.com, this controversy has somewhat affected Three Squirrels’ brand image. If one gleans something from this incident, it is not that “there is still some good in making a big issue out of it” but that the end result of such vilification is to destroy an enterprise that was devoted to boosting the economy and a production team that had put its heart and soul into executing plans.

Hu also said, “If Chinese society refuses to accept the image of Chinese people presented in this advertisement, I believe similar behavior will disappear from ads.”

This is perhaps also what the Three Squirrels model is worried about. A line in her Weibo post reads, “When you guys scold me, did it ever come across your mind that my job is a model and this is my livelihood?”

If businessmen and enterprises go to extremes and avoid slit-eyed models for fear of becoming embroiled in controversy, then only models with big eyes come into their line of sight. That may bring about a different set of problems.

Related: The psychology of facial aesthetics: A cultural perspective | Foot-binding in ancient China: When women fought against their genes to be beautiful | A dialogue with Andrew Gn and Ji Wenbo: Fashion is an attitude to life | China's crackdown on pretty boys and temple temptresses: Why are Chinese women feeling targeted?