Foot-binding in ancient China: When women fought against their genes to be beautiful

A mischievous saying goes that there are no ugly women, only lazy women. The care one puts into one’s beauty regime determines the beauty standards she can attain. But in the days of ancient China, such effort went to extremes: young girls were forced to have their feet bound. After tremendous pain in pursuit of mignon dainty feet, they attained short yet ironically bulbous “golden lotuses”. Are such unreasonable demands of beauty foisted on women by men, or a shackle that women put on themselves? If it seems unimaginable that foot-binding continued in China for a thousand years, just think of the pain some go through in modern cosmetic surgery. 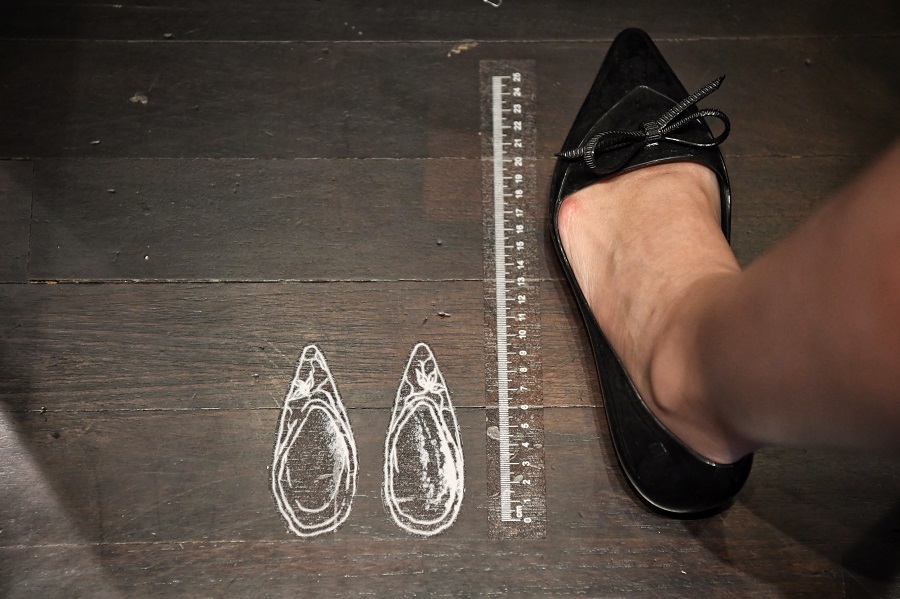 The curator of the refreshed Wan Qing Yuan gallery showing the decal of the size of a pair of bound feet, a new feature at the Sun Yat Sen Nanyang Memorial Hall, Singapore, 12 January 2021. A new interactive element shows just how small the ideal Chinese woman’s feet were at a time when foot-binding reflected a family’s virtue and class. (SPH)

Grace Chong - 21 June 2022
Over the past several years, Chinese private firms have ferociously invested in India’s tech start-ups. Initially welcomed, China’s diversion of interest from erstwhile US investment has been viewed with some measure of suspicion since the Galwan Valley conflict. Are we living in a world where investment patterns are determined by statecraft? ISAS academic Karthik Nachiappan examines the issue.
Read more
Translated by Grace Chong on 5 February 2021

Philosophers often claim that the only constant is change. This is also true in the fashion world. The trends of “A4-paper-width waistline”, “firm abs”, and “touching one’s belly button from one’s hand behind her back” are out of fashion. Now it is “BM style“ that prevails. BM style refers to the fashion style of Brandy Melville, a brand targeting the petite. Short, tight-fitting and small-sized clothing are the fashion buzzwords of BM, and the brand’s popularity has encouraged millions of women in the world to lose weight in order to squeeze themselves into the small sizes of BM clothes. Fashion changes, but the hidden standard of beauty may not. In Asian culture, a beauty is usually young and slim with fair skin. Those who cannot meet this standard may experience “body shame” and become the object of ridicule.

Beauty standards are often defined in terms of specific body parts of women, such as their breasts, waists, legs, faces, mouths, eyebrows, noses, etc. Some of these standards can be considered universal aesthetic requirements worldwide. However, there is one peculiar beauty standard that is unique to ancient China — three-inch “golden lotuses” (三寸金莲), or a pair of 10cm-long feet.

No pain, no gain

You may feel sick when you see pictures of three-inch “golden lotuses”. But this freaky malformed shape of feet is indeed regarded as the ultimate beauty standard in ancient China. Women had to bind their feet in their childhood and pay the price of extreme pain. As the saying goes: “A pair of small feet, a jar of tears (小脚一双眼泪一缸).” The process involves pressing a girl’s four toes toward the heel with cloth binders and bulging the foot into an arched shape. Young girls also need to wear tight socks to give the whole foot a slender look.

Foot-binding was thus encouraged to make sure that women would contact as few people as possible, and small feet became a symbol of a virgin or a “good woman”.

The origin of foot-binding cannot be traced precisely. It is widely believed that the practice started from the Song Dynasty (960-1279 A.D.) and flourished in the Ming (1368-1644 A.D.) and Qing Dynasties (1636-1921 A.D.). In the dynasty of Southern Tang (937-975 A.D.), imperial court dancers bound their feet to perform graceful dances, in a strategy to attract the emperor’s attention and gain his favour. The practice of foot-binding then spread among the common folk and became compulsory in the Southern Song period (1127-1279 A.D.).

Foot-binding has many symbolic meanings in ancient China. It mirrors certain Confucian expectations of women: one should not lose their virginity before marriage; one should avoid physical contact with men and stay faithful to their husbands even if they are widowed. Foot-binding was thus encouraged to make sure that women would contact as few people as possible, and small feet became a symbol of a virgin or a “good woman”. This practice also reinforced the division of labour in ancient China where men belonged to the public sphere while women were relegated to the domestic sphere (男主外女主内). Consequently, women were excluded from social life, confined to the household, and reduced to a state of being dependent on men.

The celebration of tiny feet was also prevalent in poems. For instance, the famous poet Yuan Mu (袁牧) edited a collection of poems in praise of small feet in his book Foot-Binding (《缠足谈》). The use of pretty poems to gloss over the indirect control of a woman’s body effectively legitimised an unreasonable standard of beauty. Besides the slender look, men were fascinated by women’s small feet due to the sexual pleasures they anticipated. It was believed that in order to maintain their balance when walking with tiny feet, women had to draw in their hips all the time, and this helped to shrink their vagina. A smaller and narrower vagina was not only a symbol of a virgin but also made men more excited during sexual intercourse.

This perverted erotic fantasy was often glorified by beautiful and euphemistic poems first, and then justified by the Confucian doctrines. Since women with small feet could not do heavy work, it was associated with upper-class status. Only the upper class did not need to work physically. Women with small feet became a synonym for beauty, delicacy, virginity, obedience, and the upper class. The male dominance of women’s bodies gradually turned into women’s voluntary choices. Grandmothers and mothers were the main force in foot-binding. Despite young girls’ reluctance, the elderly persuaded them by saying, “we are doing this for your good” and warned young girls that no man would marry a woman with a pair of natural big feet.

No woman can fulfil the patriarchal norms easily because the social expectations of men and women are biased in the first place. Men are evaluated by the wealth while women by the physical looks (男才女貌).

The most effective way to control women is to set up a beauty standard that no one can meet and to celebrate those who try to meet the standard by distorting their bodies. A patriarchal sense of beauty then gets passed down through a conspiracy of men and women. No woman can fulfil the patriarchal norms easily because the social expectations of men and women are biased in the first place. Men are evaluated by the wealth while women by the physical looks (男才女貌). It is relatively easy to accumulate wealth through generational or personal hard work. But women need to fight against their genes to cater to the impossible standard of beauty. Women who fail to change their bodies are often stigmatised as weak-willed, and they are told that they are doomed to be inferior. To humiliate one born with certain characteristics empowers the perpetrators and makes the victims seem worthy of blame.

I am not telling an alarmist story to scare women. Instead, I am drawing from the past to remind them of the subtle objectification of women fuelled by consumerism: high heels, make-ups, BM clothing, and all the other trends perpetuating standards that push you to be slender rather than healthy.

Related: A Chinese woman's status and the one-child policy | Death of a Peking University girl: Virginity matters in modern China | Chinese women in the 21st century: Finding happiness and meaning in life