China's 2021 quarterly economic figures showed a general weakening, falling to a low 4% in the fourth quarter. While international analysts are of the view that China’s economy is in rapid decline, Gu Qingyang thinks otherwise. But that does not mean China's road ahead in the new year will be smooth sailing. Policies will need to be tweaked to ensure a stable economic trajectory in 2022. 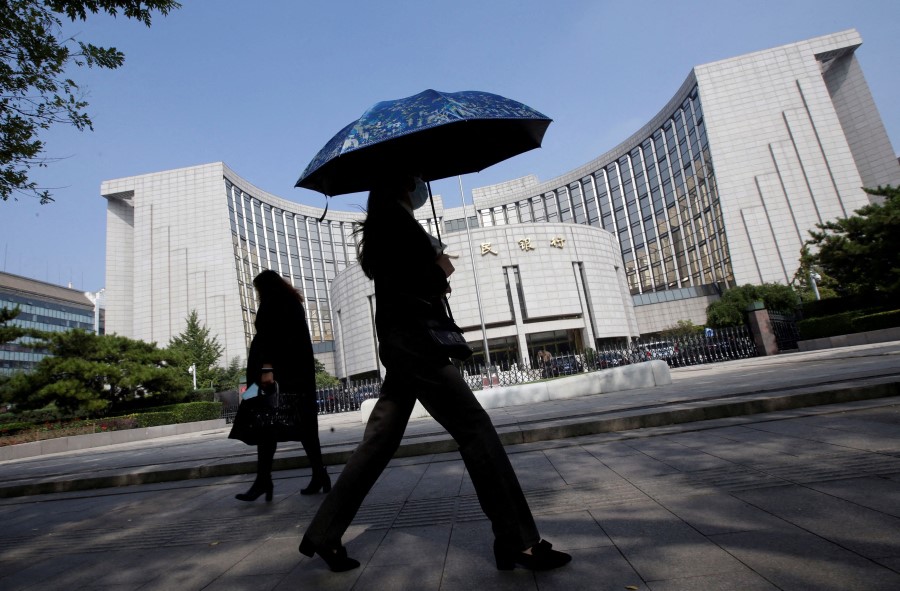 People walk past the headquarters of the People's Bank of China (PBOC), the central bank, in Beijing, China, 28 September 2018. (Jason Lee/Reuters)

Candice Chan - 20 June 2022
The Fujian, China’s third aircraft carrier, was launched on 17 June. The highlight is the electromagnetic catapult system for launching aircraft, which could put it on par with much of the US’s cutting-edge technology in the field. Zaobao correspondent Yu Zeyuan takes a closer look at the implications of this development.
Read more
Translated by Candice Chan on 24 January 2022

Final consumption expenditure and gross capital formation drove the economy to grow by 5.3 and 1.1 percentage points respectively. The former remains the main driver of the economy while the latter was the weakest link last year. Net exports made a significant contribution driving the economy by 1.7 percentage points, mostly benefiting from China’s sooner than expected economic recovery as well as a surge in demand from other countries.

China’s dynamic zero-Covid policy has created the necessary conditions for normal economic operations. China is the world’s second largest consumer market and the centre of the largest manufacturing industry, and it is not too difficult to generate domestic economic circulation. In fact, domestic consumption contributed 79.1% to China’s economic growth last year, 4.4% higher than the year before, showing that China’s domestic economic circulation kept growing amid strict border controls.

...if China took a tolerant approach to the virus, the impact on the economy would be even greater.

Of course, compared to normal circumstances, strict pandemic controls would definitely have suppressed consumption, but if China took a tolerant approach to the virus, the impact on the economy would be even greater. In choosing the lesser of the two evils, China’s strict pandemic measures is the main reason for its stellar economic performance, giving a huge boost to China’s importance in the global economy. China provides much of the world’s material supplies, easing the global public health crisis and global economic decline.

However, behind China’s excellent economic performance lies many problems that require much effort to resolve.

Last year’s quarterly economic figures showed a general weakening, falling to a low 4% in the fourth quarter, with many international analysts of the view that China’s economy is in rapid decline. However, it may be an oversimplification to come to that conclusion based on these figures.

In 2020, China was hit hard by the pandemic, and its quarterly figures for that year went from negative to positive and continued to rise to a high of 6.5% in the fourth quarter. This previous quarter-by-quarter increase in the baseline figure is one of the reasons for the quarter-by-quarter decline in growth in 2021. Taking the average figures of the four quarters over the past two years would show that these figures have actually hovered around 5%, with no significant decline by quarter.

The issues in the second half of last year were mainly structural, as well as due to policy flaws. Since last May, China has implemented a series of somewhat tight macroeconomic policies, and rolled out strict regulatory policies that have had a major impact on sectors like real estate, the consumer internet, and tutoring. While some regulatory policies will improve China’s system in the long term, the market is expected to rapidly weaken due to the lack of effective communication.

China’s main challenge is policy improvement. Right now, policymakers can see that there is insufficient endogenous growth motivation, with great pressure in terms of supply, demand and expectations. The central government has set the general tone for stabilising the economy, emphasising again that economic development would take centre stage in its development strategy. It has also clarified people's vague perceptions of some major policies such as common prosperity and the private economy.

It can be expected that China’s economic growth this year will start low and end high.

Since November last year, there has been a slew of policies aimed at stabilising growth and providing targeted stimulus, and future policies will become more market-friendly. Such policies are crucial in reversing market expectations; as long as the policies are on the right track, China’s economy will see greater improvement, because it is fundamentally healthy.

In terms of policy impact, the toughest period for China’s economy is probably past, but given the lag effect, it will take time for policies to take effect after implementation. It can be expected that China’s economic growth this year will start low and end high, and if there are no major hiccups, its economic performance for the year will be close to its potential growth rate.