While China’s economy grew about 8% in 2021, the GDP growth target for this year is expected to be a more modest “above 5%”, taking into consideration various easing measures by the central bank and political considerations heading into the 20th Party Congress in autumn this year. Zaobao’s associate editor Han Yong Hong gives her assessment. 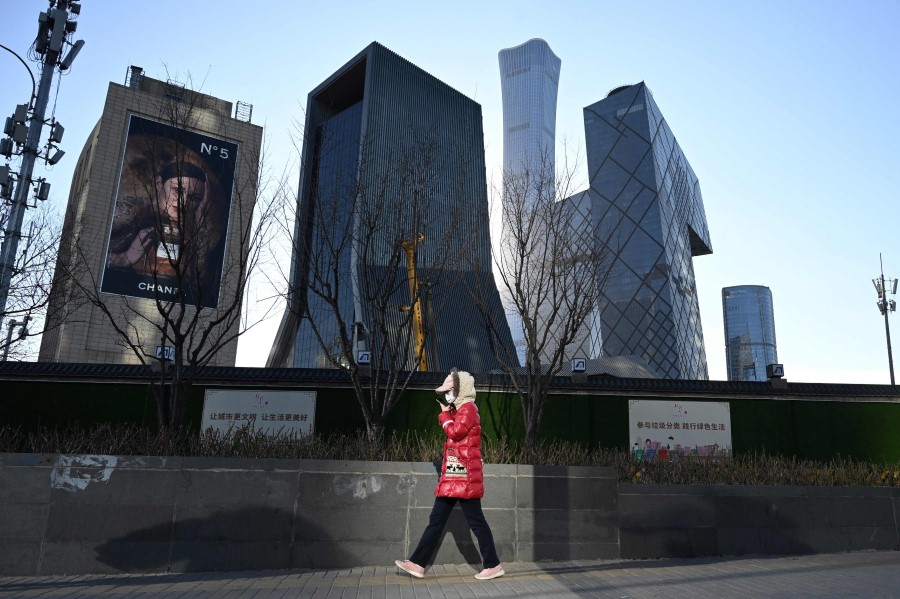 A woman walks on a sidewalk in the central business district in Beijing on 16 December 2021. (Greg BakerAFP)

Candice Chan - 30 January 2023
A mall in Shenzhen came under fire for putting up white lanterns with black text as part of its Chinese New Year decorations, while an “ugly” rabbit-shaped light decoration was removed from another mall in Chongqing. Academic Zhang Tiankan muses on tradition and innovation, and the evolution of traditional decorations.
Read more
Translated by Candice Chan on 21 January 2022

China’s economic figures for 2021 were released on 17 January 2022 to much attention. The world’s second largest economy grew 8.1% last year, which was better than expected. However, the growth rate in the fourth quarter showed a rapid decline as it plummeted to 4%, the lowest since the second quarter of 2020 when the pandemic in China was brought under control.

Since December 2021, China’s top leadership has reiterated that the mission for the economy in 2022 is “stability”. The character for stability (稳) appeared 25 times in the summary notes for the 2021 Central Economic Work Conference, which was held in early December 2021; subsequently, officials also said all stakeholders should actively introduce policies that are conducive to economic stability, and be wary of introducing policies with a contractionary effect.

At a press briefing on 18 January 2022, People’s Bank of China (PBOC) vice-governor Liu Guoqiang made clear that with the Chinese economy facing triple pressures, stability would be the greatest progress. He said, “We should hurry up, make our operations forward-looking, move ahead of the market curve, and respond to the general concerns of the market in a timely manner,” adding that the PBOC will “open monetary policy tool box wider, maintain stable overall money supply and avoid a collapse in credit," so that the market does not lose heart.

At least one online writer who was looking forward to the authorities rescuing the market rejoiced as they described the officials’ plain speaking as “so simple and raw, even an illiterate person can understand”.

If the economy continues to be weak into the second half of the year, or shows instability that spreads through society and leads to anxiety, how can there be a conducive environment for the 20th Party Congress to proceed smoothly?

An eye to the 20th Party Congress

Experts say the so-called “stability” that officials repeatedly stress is not so much stable growth as avoiding disaster — more accurately, it is the worry of leaving things too late. The authorities are clearly preparing to act quickly and decisively; at the press session on 18 January 2022, Liu said the downward economic pressure will be “yesterday’s story” in a few months, as if revealing the upcoming plot script.

Economically, China is indeed facing the triple pressures of demand contraction, supply shocks and weakening expectations. Amid “involutionary” competitive pressure, capital market instability, and policies with a contractionary effect, it is not just young people who are thinking of “lying flat” (躺平) — even private companies and investors also want that, prompting the authorities to put things right and step in as soon as possible to stop the downward trend.

However, behind the authorities’ high-profile “market rescue” lies a stronger political motivation: the Chinese Communist Party’s (CCP) 20th Party Congress to be held in autumn this year, where key personnel adjustments will be made to the Central Committee and local officials. If the economy continues to be weak into the second half of the year, or shows instability that spreads through society and leads to anxiety, how can there be a conducive environment for the 20th Party Congress to proceed smoothly? The current situation has to be changed without delay.

Keeping to achievable target of ‘above 5%’

Indeed, things are happening faster than can be recorded. PBOC announced on 18 January 2022 that it had cut the interest rates of its medium-term lending facility (MLF) loans and reverse repos by ten basis points; on 20 January 2022, it reduced its one-year loan prime rate (LPR), in a series of credit-easing measures.

When the Two Sessions are held in March this year, the authorities will probably come up with other easing policies. The confidence shown during the Two Sessions last year in the “rise of the East and decline of the West” might temporarily shift to caution. As for China’s GDP growth target for this year, Chinese Premier Li Keqiang is expected to reduce it from last year’s “above 6%” to “above 5%” in this year’s work report.

If a growth target of above 5% is set for 2022, it would guarantee that the goal for 2035 would be met and also leave room for China’s economy to shift to medium-speed growth.

In fact, according to the annual Blue Book of China’s Economy released in December 2021, the Chinese Academy of Social Sciences, a state think tank, already predicted that the Chinese economy would likely grow by around 5.3% in 2022. These are all signals given by official organisations — although the eventual economic growth rate may still be higher than expected; keeping economic growth slightly above 5% is perhaps the lowest that officials can go.

The CCP once set a goal in 2020 hoping to double the total economic output or per capita income by 2035, which means that the average annual GDP growth rate must reach 4.78%. If a growth target of above 5% is set for 2022, it would guarantee that the goal for 2035 would be met and also leave room for China’s economy to shift to medium-speed growth.

Looking back on China’s experience since reform and opening up, China’s average annual growth rate was around 10% in the first 30 years, before it dropped to between 7% and 8% in 2012, and further slowed to the 6% range in 2015. Affected by the pandemic in 2020 and 2021, China’s economic growth deviated from its long-term trend and could have possibly fallen below the 6% mark during this period.

This year, China’s economic growth officially stepped into the 5% range and would further transit into medium-speed growth next, which means a growth rate of above 4%. This is a natural trend, and it is still impressive for an economy of this size to be growing 4% or 5%. The key is in ensuring quality amid an economic slowdown. This will be a balance that China’s higher-ups must strive to maintain for the next five years.

In terms of international impact, as the main driver of the global economy, if China slows down, economies that it has close economic and trade relations with will be affected directly. Last year, a HSBC report pointed out that South Korea was the most sensitive to changes in Chinese growth, followed by Thailand. The bank’s economists said that for every percentage point China added to its growth, South Korea reported about 0.7% of additional growth. Since the growth of the Chinese economy is expected to slow, Citibank also lowered their economic growth forecasts for South Korea and Taiwan in September last year.

...while various economies strive to improve the quality of cooperation with China in the future, they will also accelerate the diversification of their investments and find and develop other partners and markets.

Putting aside political factors and looking at economic logic alone, this implies that while various economies strive to improve the quality of cooperation with China in the future, they will also accelerate the diversification of their investments and find and develop other partners and markets.

At the same time, China’s overarching “stability” aim for 2022 will at least dial back some uncertainty. Last year, to safeguard national information security, prevent the disorderly expansion of capital, restructure the economy, and reverse harmful trends in the off-campus tutoring sector, China dealt consecutive blows to tech enterprises, after-school training institutions, and also curbed soaring property prices. These created various deviations, including “the fallacy of composition and fallacy of division” that officials have admitted to.

This year, driven by greater political motivations, China wants to make sufficient efforts to save the economy in the first half of the year. Hopefully, this will not bring about another round of deviations and fallacies.