With strict pandemic measures in place, young Chinese have the perfect excuse not to return to their hometowns during the Spring Festival. If they did make the trip home, they would have faced a barrage of questions about their lives and burned a large hole in their pockets trying to show that they’ve made it. As it gets harder to make a living in their adopted cities, shoring up their finances and getting a head start in the working world is what matters most. 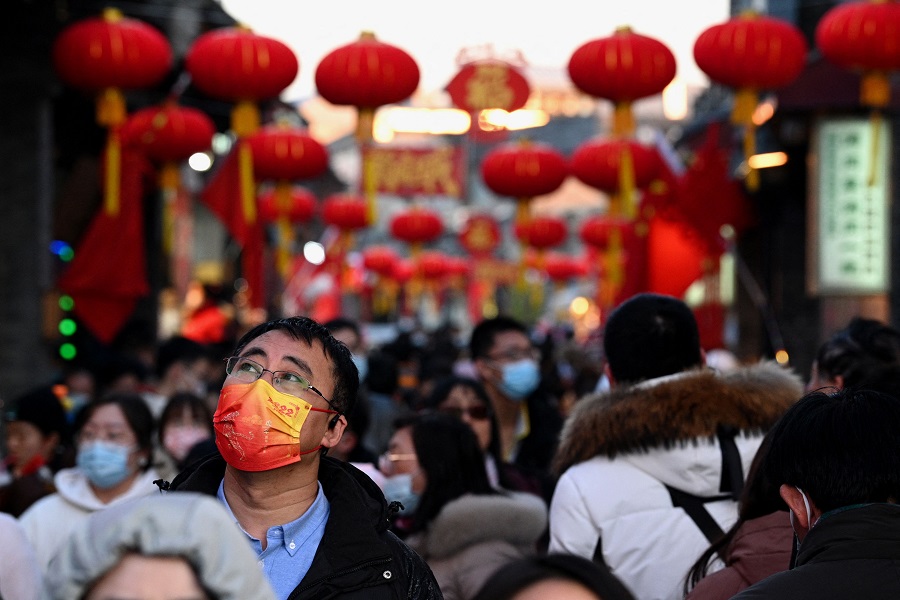 People walk through an alley decorated with traditional lanterns near Houhai lake in Beijing, China, on 2 February 2022. (Noel Celis/AFP)

Grace Chong - 30 January 2023
Amid ongoing tensions, a high-level visit by US Secretary of State Antony Blinken to China in the coming week shows hope for improved relations between the two economic powerhouses. Zaobao correspondent Yu Zeyuan notes that while the meeting may not produce practical results, it is a much needed exchange to manage and control China-US relations from worsening.
Read more
Translated by Grace Chong on 3 February 2022

The Year of the Tiger is the third Chinese New Year (CNY) that the Chinese are spending in situ due to Covid-19. While the Chinese typically look forward to visiting their hometowns during CNY, some young Chinese dread making the annual pilgrimage home. Now with the pandemic, they've found the best excuse not to do so.

With the rising trend of young Chinese not returning to their hometowns to celebrate CNY, will an already weak nianwei (the CNY atmosphere) further weaken?

A video editor at a new media company in Beijing, 26-year-old Shandong native Liu Yuzhe started feeling jittery about returning home a week before CNY. Just before our interview, he was sharing the anxieties of returning home with his cousin, who is also working away from home. Both of them do not want to go home for the holidays because “there are too many relatives asking too many questions”.

He explained, “My entire family, extended relatives included, celebrate CNY together. That’s more than 20 relatives all gathered at the same place. The young ones would be summoned one by one to undergo rounds of interrogation by all my aunties and uncles.”

Inundated with these “painful” questions, Liu would get the sinking feeling that his year’s hard work of endless overtime and toil was worth nothing in his relatives’ eyes.

Invariably, the nosy relatives would ask questions such as “Why work in another city when the pay is low?”, “Why don’t you become a civil servant instead?”, and “Will you be able to buy a house in a few years’ time?”.

Inundated with these “painful” questions, Liu would get the sinking feeling that his year’s hard work of endless overtime and toil was worth nothing in his relatives’ eyes. He lamented, “They feel that letting go of family resources and not staying close to home is pure stupidity and not being filial. No one cares about what I think.”

It’s not new that young Chinese dread going home for CNY. About a decade ago, a netizen had put together “five fears” that youths working in another city have of going home to celebrate CNY. While the difficulty of getting a ticket home during the Spring Festival travel rush (春运 Chunyun) period has become mostly manageable, Chinese youths are still intimidated by the four remaining fears of “relatives’ interrogation”; “parents rushing them to get married”; “buying and sending gifts to save face”; and “visiting relatives and friends”.

No need to suffer an interrogation by relatives this year

Since the pandemic broke out in 2020, the Chinese government has been encouraging people not to leave their cities of residence during CNY, giving youths who fear returning home a reason not to do so.

Liu said, “Without the pandemic or the strict epidemic prevention measures, my parents would never have allowed me to stay put during CNY, regardless of any excuse I gave. Besides, my colleagues and friends would have gone home to celebrate CNY, so it would have been meaningless for me to stay here alone as well.”

CNY has traditionally been a time for reunion. While there is a song urging people to return home for CNY whether they are rich or poor (有钱没钱, 回家过年), earning a living is the top priority for youths whose incomes have been affected by the pandemic.

With all this, going home for Chinese New Year would cost at least 10,000 RMB, at a rough estimate.

Originally from Baoding, Hebei, 27-year-old flower shop owner Li Feifei has spent CNY in Beijing for the last two years. She told Zaobao that she would not be returning home for CNY this year as she is afraid that local epidemic prevention measures might trap her in her hometown, and prevent her from making the most of post-CNY business opportunities. Additionally, she hopes to “save the money needed to ‘save face’”.

She went on to calculate the cost of going home: 2,000 RMB (about S$400) for her parents, 200 to 500 RMB in New Year red packets for each of her school-going nephews, and about 2,000 RMB for miscellaneous weddings and babies’ full-month celebrations, as well as individual gifts for relatives. With all this, going home for Chinese New Year would cost at least 10,000 RMB, at a rough estimate.

“My income over the past two years was barely enough to cover the rent; now I’ve finally found my footing,” she said. “Earning money is what matters now.”

The pandemic has given young people a good reason not to go home, given the pressures they face in daily life and celebrating Chinese New Year. However, with young people missing from the annual family reunion, would it weaken an already weak nianwei?

Creating a sense of nianwei of their own

Sociologist and folk customs academic Ai Jun said reunions over the Chinese New Year are just a desire of the Chinese people going back to ancient times, and are not the only choice. He cited the examples of literary figures and officials on the borders in ancient times, who mostly spent Chinese New Year away from home due to undeveloped transport, noting that without such feelings of homesickness and pining for home, they would not have created the beautiful poems that have been passed down today.

He said nianwei is just a sentiment, a memory and feeling from childhood, which is different for people in different times and regions, and which also changes over time. While the pandemic is hindering people from going home for Chinese New Year, spending Chinese New Year away from home and following local customs and seeking one’s own feelings — that is creating each person’s nianwei.

Guo Zhiqi, 28, is a sales manager with a beer hall in Beijing, and has spent the past two Chinese New Years in Beijing. In her view, not going home for Chinese New Year is not as sad and lonely as people imagine.

Before the pandemic, she used to go back to Inner Mongolia each year to spend Chinese New Year with her parents: “Conversations with my parents mostly revolved around whether or not I was looking for a partner.”

"My dad goes to bed before it’s [Chunwan] over, while my mum and I scroll through Douyin on our phones. And just like that, Chinese New Year is over.” - Chinese youth

In the past two years, her parents have started to understand that she is working hard in her career and are “trying not to talk about finding a partner”. However, now that her parents are no longer pushing her to get married, there are practically no common topics of conversation between them.

“After dinner on Chinese New Year’s eve, we watch the Chunwan (春晚, CCTV’s New Year’s Gala). My dad goes to bed before it’s over, while my mum and I scroll through Douyin on our phones. And just like that, Chinese New Year is over,” she said blandly.

But when talking about spending Chinese New Year with her friend in Beijing, she excitedly described it as a “fun and liberating journey of the self”, saying: “The two of us rode our electric vehicles through half of Beijing city. We found a 24-hour BBQ eatery, where we ate and drank and chatted, and cried and laughed as we felt like it.” She laughed as she added: “I guess that’s also a nianwei of sorts.”