Amid worsening Covid-19 outbreaks in India and many Southeast Asia countries, ship operators are turning to China's massive workforce of 1.65 million crew members to fill the global shortage of crew members. Why are Chinese crew members in such high demand? Caixin journalists Jia Tianqiong and Yang Ge find out. 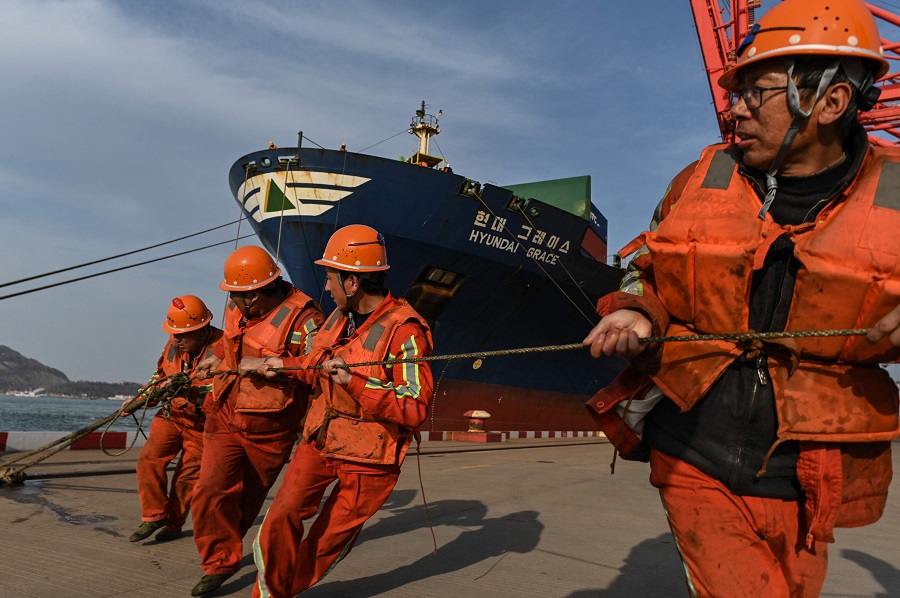 Grace Chong - 10 August 2022
Academic Ngeow Chow Bing takes stock of the "one China" policy of Southeast Asian countries, noting changes in interpretations over the years and their subtle differences from China's "one China" principle and the US's "one China" policy. He warns that US House Speaker Nancy Pelosi’s visit to Taiwan has exacerbated cross-strait tensions and could further limit Taiwan's international space in Southeast Asia.
Read more
Translated by Grace Chong on 21 June 2021

Chinese ship workers have become a hot commodity on the world’s high seas, welcomed by global ship operators for their relative safety due to China’s ability to remain largely free of Covid-19 this year.

One such worker, ship captain Shao Bo, recently accepted his latest assignment despite having laboured for the last eight months. He said many ships are now refusing crew from other countries and regions that were previously popular recruiting grounds due to local flare-ups in recent months. That’s created an opportunity for people like himself to earn big money.

“Right now there’s an extremely short supply of ship workers, so companies hope people like me can continue to stay on their ships,” he said. “Salaries for ordinary ship workers have jumped from US$4,000 a month to US$5,500.”

Ocean shipping is responsible for 90% of the world’s trade, with bulk commodities like grains, coal, oil, iron ore and many other products used to fight the pandemic being sent via this mode of transport. Hence, ship crews are an important link in the global trade picture. But many shippers are avoiding crew members from the traditionally fertile hiring grounds of India and Southeast Asia lately due to recent major outbreaks that have sent many countries into various states of lockdown.

Before the latest outbreaks, Indian and Filipino crew members were particularly popular due to their relatively low salary requirements and higher English ability. Of the roughly 1.64 million crew members recruited by international commercial shippers in 2019, around 740,000 came from either the Philippines or India, accounting for nearly half of the global total, according to the International Chamber of Shipping.

But after India experienced a major outbreak since February this year and many Southeast Asian nations battled similar surges, outbreaks on ships began to grow as well, brought about by infected crew members from affected countries. In one instance, the ship Eaubonne travelling from India to South Africa was found to have 14 Filipinos on board who tested positive for the virus on reaching its destination in early May, resulting in the entire ship being quarantined for several weeks.

The hiring of Filipinos has also dropped sharply due to growing doubts among ship managers after several instances of Filipino workers providing fake results of testing negative for the Covid-19 virus, Gilbert Liu, one such recruiter in Singapore, told Caixin.

Many ports around the world have also refused entry to ships with Indian crew, after India's outbreak made global headlines, which has also led to shippers avoiding crew members from India. A similar situation exists for workers from Myanmar, another major supplier of ship crew that has experienced a sharp uptick in Covid-19 cases.

According to Liu, even before the pandemic, Chinese crew were highly sought after for their ability to work without complaining, and for their consistency and reliability. Many Chinese workers have also been vaccinated.

Li Haibing, a recruiter for Cosco (one of China’s top shipping operators) in the southern port city of Shenzhen, told Caixin he is now sending out recruitment notices seeking large numbers of ship staff every two to three weeks.

While they have filled a gap left by workers from other parts of Asia, Chinese ship crew members are still mostly working on shipping routes connected to China and the domestic routes, and are still relatively uncommon on other international routes. However, that could change when the pandemic eases, as many of them are now attracted to higher-paying jobs on the international routes.

This article was first published by Caixin Global as "Demand Swells for Chinese Shipping Crews Amid Global Shortage". Caixin Global is one of the most respected sources for macroeconomic, financial and business news and information about China.

Related: China's top infectious diseases expert: India faces even bigger Covid-19 outbreak ahead | Can the domestic market save jobs, livelihoods and companies in China? | China and India: When Western democracy fails and only utopia remains