Amid regulatory concerns and news of Didi Chuxing delisting from the New York Stock Exchange, it seems that the writing is on the wall for Chinese companies seeking overseas listings. Will the Hong Kong Stock Exchange be their natural refuge? The Hong Kong government has implemented reforms to woo new-economy innovative companies and investors, but will these measures be enough? NUS academic Xu Le has the details. 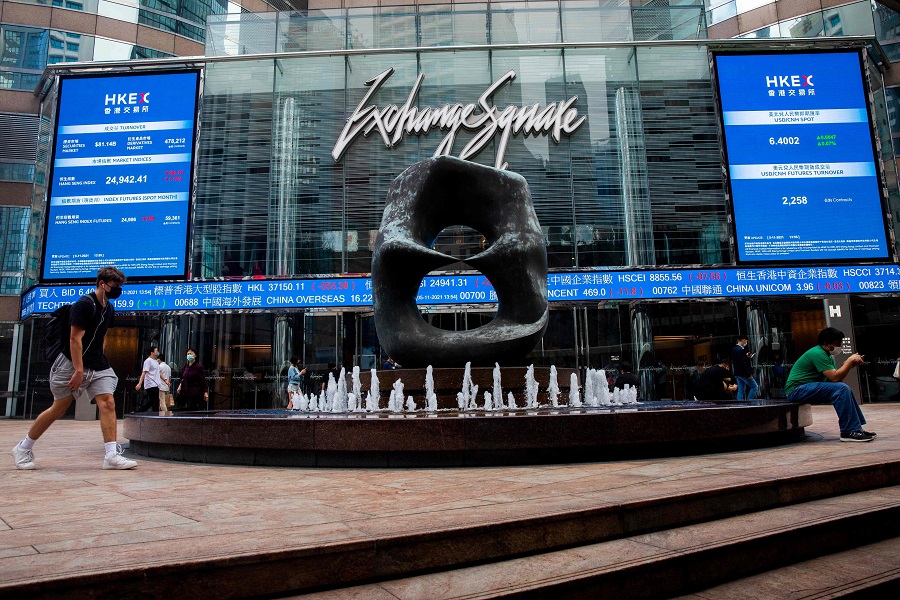 Grace Chong - 12 January 2022
The global chip shortage throughout 2021 prompted many tech companies to rely more on themselves. Coupled with the rise of artificial intelligence, demand for high-capacity chips has increased with tech companies and device makers racing to deliver smarter services and products. But the global semiconductor industry is also getting increasingly crowded, as more and more newcomers seek to gain a foothold in advanced chips to power new technologies.
Read more
Translated by Grace Chong on 30 December 2021

Chinese ride-hailing firm Didi Chuxing’s announcement that it would delist from the New York Stock Exchange has dealt a big blow to other Chinese firms in the US financial market. This marks a turning point: gone are the glorious days of Chinese firms listed on US stock exchanges. Like startled birds, other Chinese firms are now struggling to find their own way to resolve the issue.

Stuck in the middle

Chinese companies listed in US exchanges are sandwiched between regulators of China and the US.

China, concerned about its national security, has long been reluctant to let US securities regulators inspect US-listed Chinese companies. According to Chinese law, financial institutions are not allowed to provide any documents or information relating to securities to foreign parties without permission.

However, US regulators worry the lack of access to such information may put investors at risk. On 2 December 2021, the US Securities and Exchange Commission (SEC) restated that Chinese companies listed on US stock exchanges must disclose ownership structure and audits. Failing to comply with the rule may lead to more than 200 companies with US$1.3 trillion worth of shares being delisted from US exchanges.

Then, listing on the Hong Kong Stock Exchange (HKEX) will be the next best alternative.

In addition, Chinese big tech companies are facing investigations and punishment from Chinese regulators. The crackdown, along with the tension between China and US, has already made it tough for them to remain listed in the US.

It is very clear that there are not many choices left for the companies. The worst case is that they will not be allowed to continue to list in the US. Then, listing on the Hong Kong Stock Exchange (HKEX) will be the next best alternative. Will Hong Kong be able to accept all of the companies from the US? This mainly depends on Hong Kong’s regulations and requirements.

China has long hoped and planned for Hong Kong to be the international primary listing venue for their own corporations. On one hand, it is convenient for regulators to monitor and oversee the financial markets and companies. On the other hand, it helps to redirect capital flows towards the Chinese market, maintaining Hong Kong’s top-tier status as a global financial centre.

Early in 2018, the government started paving the way. HKEX’s new listing regime became effective that year. The listing reforms, which include a new weighted voting rights (WVR) structure — an appeal to pre-revenue biotech issuers and establishment of a secondary listing route — aim to attract more new-economy innovative companies and investors in order to enhance Hong Kong’s competitiveness as an Asian financial hub.

Chinese issuers without a weighted voting rights (WVR) structure and those which are non-innovative companies will be allowed to have secondary listings in Hong Kong.

According to a research report from HKEX, mainland China has an abundant potential supply of new-economy innovative companies. With the WVR structure, these companies would not worry about losing control of the company while raising funds in their initial public offerings (IPOs).

In addition, according to Bloomberg, China might exempt companies going public in Hong Kong from first seeking the approval of the country’s cybersecurity regulator. Only those heading to list in other countries such as the US will undergo a formal review. This signals that the approval process for listing in Hong Kong will be less troublesome than in the US.

More new reforms will be undertaken from next year. Special Purpose Acquisition Companies (SPACs), which are also known as blank-cheque firms, will be allowed, following tweaked rules, to help smaller companies launch IPOs.

In addition, the secondary listing regulations have been ramped up and will take effect soon. According to the new rules, Chinese issuers without a WVR structure and those which are non-innovative companies will be allowed to have secondary listings in Hong Kong. It will give greater flexibility for companies seeking dual primary listings while maintaining their existing WVR structures.

Listing in Hong Kong is not the absolute solution for every US-listed Chinese firm, especially for small or poorly-managed companies.

These relaxed listing rules seek to better prepare Chinese firms for listing in Hong Kong. Currently, there are 200 applications to list in Hong Kong and we will probably see more in the foreseeable future. But is this the only solution?

Listing in Hong Kong is not the absolute solution for every US-listed Chinese firm, especially for small or poorly-managed companies. These firms may not satisfy the requirements relating to the revenues or market capitalisation for a secondary listing in Hong Kong. According to a recent report from Goldman Sachs Group, about 81% of 253 US listed Chinese firms do not meet the requirements.

If some Chinese stocks perform increasingly badly on US exchanges, or continue to face the risk of delisting, other Chinese companies listed in HKEX will become less attractive to global investors.

Is it practical for these small firms to relist in Shenzhen Stock Exchange or Shanghai Stock Exchange? Probably not. They will have to meet more stringent requirements, yet they can only raise limited capital as compared to what they can raise from US stock exchanges. Hence few companies will consider relisting in these two exchanges.

Recently, China and US regulators have started negotiations on the audit inspection of Chinese companies on US exchanges. But the progress is quite slow. The US regulator said it was “unable to inspect or investigate completely”. It implies a potential delisting of 15 Chinese firms as they failed to comply with auditing requirements for years. But it has not come to a final conclusion about how to resolve the issue. If they can reach a middle ground, it will be a big relief for other Chinese companies listed in the US.

Even if the Chinese firms successfully complete their listing in Hong Kong, they still face challenges.

Poor post-listing performance could be one of them. For example, China’s short-video sharing firm Kuaishou Technology, has lost more than 50% of its market value since its IPO in January 2021.

HKEX is susceptible to external events. If some Chinese stocks perform increasingly badly on US exchanges, or continue to face the risk of delisting, other Chinese companies listed in HKEX will become less attractive to global investors.

Life will be more difficult for small or mid-sized IPOs, as the market will be more dominated by large tech companies. According to a Caixin commentary, “the top 20 per cent of the most traded stocks contribute to over 90 per cent of liquidity”. It implies that investors might overlook those smaller companies.

In general, the best solution for Chinese companies on US exchanges is still to remain listed in the US. But whether that is feasible will depend on the negotiation between the US and China, as well as other political factors.