In the first of a six-part series on hiking in Hong Kong, cultural historian Cheng Pei-kai shares the wonders of Hong Kong’s hiking trails. Hong Kong’s known as a shopping paradise, but go off the beaten track and there’s plenty more to discover. 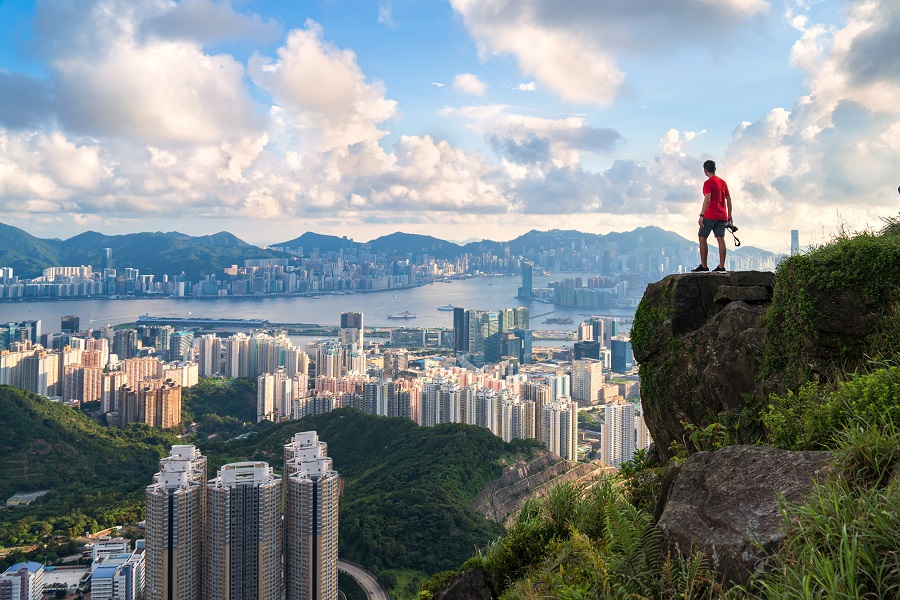 Hong Kongers have beautiful bays, mountains and seas to discover, right in their own backyard. (iStock)

Grace Chong - 30 January 2023
In the last of a six-part series on hiking in Hong Kong, cultural historian Cheng Pei-kai shares the wonders of Hong Kong’s hiking trails. As he rediscovers the hidden splendour of Ma On Shan on a difficult hike, he marvels at the ingenuity of the gods, keeping the pristine away from the evil world. Only the most determined will glimpse unparalleled beauty.
Read more
Translated by Grace Chong on 14 December 2022

(All photos provided by Cheng Pei-kai unless otherwise stated.)

If friends visiting Hong Kong are younger than me, fit, staying for quite a while, and interested in pursuits other than shopping, I would invite them for a weekend hiking trip. “Hiking?” they would often ask incredulously.

In Hong Kong, apart from hitting the malls of Central, Causeway Bay and Tsim Sha Tsui, or shopping at luxury boutiques; taking the cable car up Victoria Peak and Ngong Ping or visiting Ocean Park to admire the pandas; and enjoying the rides at Disneyland, what treks at country parks, mountains and valleys are worth a day trip?

More to Hong Kong than meets the eye

These locals have neither basked in the charm of the mountains and the seas nor admired the turning of day to night in the hills and bays.

Putting aside whether Yaohan (a Japanese department store) still exists in Hong Kong, whether the Coliseum can be considered a sports stadium, and what “midnight movies” actually mean, Hong Kong is simply a “flowery” capitalist world to outsiders — a mortal world that the biggest thunderstorm and strongest typhoon cannot sweep away; a shopping haven for the latest Louis Vuitton bag, Hermès scarf and Salvatore Ferragamo leather shoes; a party venue for celebrity concerts; and a place where the party never stops. Go hiking in a place like Hong Kong? Are you kidding?

In fact, it is not only the foreigners who feel this way; many Hong Kongers who are born and raised in the city working nine to five, drinking Chinese tea and eating dimsum, playing mahjong and betting on horses have never set foot in Hong Kong’s country parks as well, or taken in the beauty of Hong Kong’s greenery. These locals have neither basked in the charm of the mountains and the seas nor admired the turning of day to night in the hills and bays.

It is true — Hong Kong’s countryside can’t be called spectacular or breathtaking. Its hills and valleys are nothing like the wonders of the world and would not make it on the list of natural World Heritage sites. When hiking in Hong Kong, one would not see the Niagara Falls or the Iguazu Falls or as described by poet Li Bai, “water gushing down from 3,000 feet as if the Milky Way is falling down on earth”. Neither would one see deserts as vast and magnificent as the Yumen Pass (玉门关). Yes, the beauty of Hong Kong’s countryside can’t compare to the mountainscapes of Zhangjiajie, filled with steep slopes and deep valleys. Neither is it like the mysterious waterfalls and lakes of Jiuzhaigou.

I sometimes wonder: is there another cosmopolitan city in the world more fortunate than Hong Kong, where its residents can easily escape from the noisy and polluted concrete jungle...

Yet the numerous cliffs and bays in the New Territories of Hong Kong, those meandering paths and the interplay of light and shadow from the mountains and the seas, are quietly waiting to be discovered right in one’s backyard. As long as you’re game to pack your bags and hike for about 30 minutes, you’ll be rewarded with endless surprises.

I sometimes wonder: is there another cosmopolitan city in the world more fortunate than Hong Kong, where its residents can easily escape from the noisy and polluted concrete jungle and step into the solitude and tranquility of the dense forests so quickly?

In an instant, one is surrounded by scenes as described by Tang dynasty poet Wang Wei: “I see no one on this empty mountain, but I hear voices from afar. Evening sunbeams saturate the deep woods, and shimmer once more upon soft green moss.”

Not too long ago, I took my friends on a hike from Sai Kung East Country Park’s Pak Tam Au to Ko Lau Wan in northern Sai Kung. This involved crossing several gentle mountain peaks along the way.

We first passed the abandoned Chek Kang village, where we wandered among collapsed buildings and broken walls. In the clearing, we saw a pristine, deserted bay. The waves were gently lapping on the shore, as if whispering that even when people are gone, things remain and everything has come to pass.

Mangrove seedlings were growing, gradually spreading their colony towards the gurgling mountain stream. How many years would it take for them to grow into a coastal jungle?

All the exhaustion that we felt, the discouraging trips and falls that we endured and the dangers that we braved were all absolved at that moment...

Behind a hill, we found a hidden trail in lush thickets. Swatting aside vines and bushes, we climbed up the trail shaded by tall trees.

After passing through the trees of a gentle hill, the landscape opened up before us and we reached a large slope at the east side of the mountain. Beneath our feet, the cliff plunged a few hundred metres downwards to the valley below. Lush mountains painted in various shades of green stretched far into the distance.

Across this long slope and up another mountain pass, we were greeted rather dramatically by the harbour of Tai Tan Hoi and Chek Keng Hau. It was as if a stage curtain had suddenly opened, revealing a beautiful and glorious new world before our eyes, catching us off guard, perhaps in the way Chinese intellectual leader of the early 20th century Liang Qichao felt “electrified” (若受电然) when he read Gong Zizhen’s poems.

All the exhaustion that we felt, the discouraging trips and falls that we endured and the dangers that we braved were all absolved at that moment, giving us a new understanding of the proverb “no pain, no gain” (吃得苦中苦，方为人上人).

Behind us, the peak of Nam She Tsim (Sharp Peak) stood tall and upright, as if piercing through the sky, bearing witness to the pure joy of our hike.

Have you experienced the beauty of undulating mountains and seas in Hong Kong’s country parks, and immersed yourself in nature’s harmony? If you have not, try going for a hike!

*This article was first published in Chinese on United Daily News as “山海交錯在香港” in 2012.