Analyst Zheng Weibin says that the establishment of the Taiwanese Representative Office in Lithuania, with “Taiwan” rather than “Taipei” in its name, should not be looked upon by Beijing merely as Taiwan gaining diplomatic space. China needs to understand better the dynamics underpinning China’s relations with Europe and the shifts in the EU's foreign policy strategy. Taking a heavy-handed approach is likely to be counterproductive for the Asian giant. 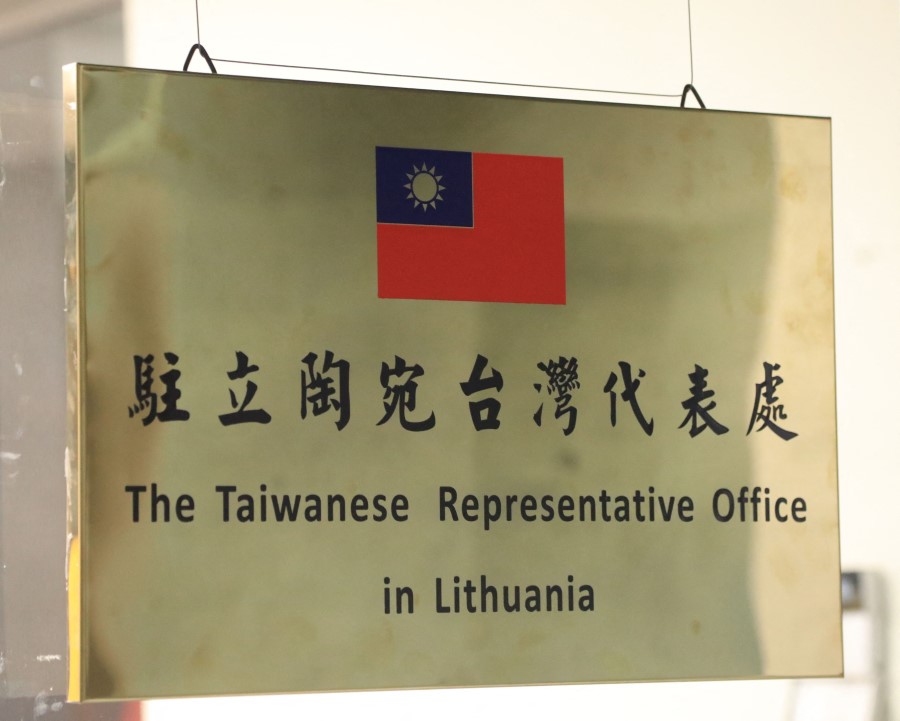 This file photo taken on 18 November 2021 shows the name plaque at the Taiwanese Representative Office in Lithuania, Vilnius. (Petras Malukas/AFP)

Candice Chan - 29 June 2022
Over the past couple of years, there has been an influx of migrants from Hong Kong to the UK. Communities have been forming in various cities, such as London and Manchester. And as Hong Kongers find jobs and settle in, the British way of life rubs off on them. But underneath all that, they remain Hong Kongers at heart.
Read more
Translated by Candice Chan on 24 November 2021

On 18 November, Taiwan established the Taiwanese Representative Office in Lithuania. Unlike other representative offices that are named after “Taipei”, this is Taiwan’s first outpost in the European Union (EU) that uses “Taiwan” in its name.

Naturally, this name that smacks of “Taiwan independence” has sparked strong objections from Beijing. While Lithuania claims that the move is in line with its adherence to the “one China” policy, there is no doubt that Taipei will see it as a diplomatic victory.

A new path of diplomacy for Taiwan

Since the spread of Covid-19 and its success in controlling the outbreak, Taiwan has found a new route to opening up its international space. The supply chain disruption due to China-US competition has also strengthened Taiwan’s position, which is naturally viewed with satisfaction in the US.

As the EU starts to see China as a “systemic rival” and wants to show the importance of democracy in its dealings with China, perhaps these CEE countries are a good choice.

Unlike other Western European countries, these countries do not have close economic and trade ties with China. In the case of Lithuania, China is not among that top 20 on its list of top countries and regions for export, and such trade ties with China limits Beijing’s sanctioning measures. Conversely, friction with China would win it US support. Top US officials such as Deputy Secretary of State Wendy Sherman, Secretary of State Antony Blinken, and national security adviser Jake Sullivan have all expressed firm US support for Lithuania.

So, these countries have become the vanguard in the EU adjusting its policy towards China. While it does not mean a change in direction for the EU as a whole, it might set a path for other countries in Europe.

However, the problem is that the democracy narrative is not enough to explain the entire picture. CEE countries including Lithuania and the Czech Republic have sent strong signals against authoritarian politics, but China and European countries share little in terms of ideology.

The US's emphasis on democratic ideology in its foreign policy may have led to these countries’ decision to toughen their stance against China. But the underlying reasons are in fact their economic failure in recent years and the wave of populism provoked by the influx of refugees and migrants.

The EU was created with the hope of creating a community with greater economic and political influence. But since its inception, the prospects for realising this vision have not been optimistic. Although the EU has increased its membership, the economies of its member states have not performed well since the financial crisis of 2007-2008.

Also, the EU has seen a dive in its relations with Russia as well as the phenomenon of Brexit. The issues of refugees and migrants have also led to rifts among member states. Populism has gained strength and become a political force that cannot be ignored in major countries such as France and Germany.

China’s global influence is expanding rapidly. But China’s influence in Europe is still confined to its economic relations with major European countries. In their desire to demonstrate their influence and address changes in their domestic politics, the European countries have chosen to brand China as its main external threat. But this is clearly the wrong approach because it does not help to solve their internal problems.

At the same time, on another level, Europe is strengthening its trade and economic relations with Taiwan, especially in technological fields such as semiconductors. While this may help Europe strengthen its position in the relevant supply chains, there appears to be no other benefits to reap.

In fact, the EU and European countries are either in the process of formulating or have already formulated their own Indo-Pacific strategies or policies, and this reflects Europe’s quest to be part of the new global economic growth pole. But if they are trying to gain a foothold by intervening in regional political disputes, their chosen path is indeed questionable.

On the other hand, the signal given by Lithuania’s move is something that Beijing must not overlook. This is a breakthrough in Taiwan’s relations with Europe which would have ripple effects. But the more crucial question is how this development came about.

Beijing’s dual use of political influence and economic incentives has coincided with the rise of the democracy narrative in global politics and the reshaping of global supply chains. The more heavy-handed Beijing is, the more likely it is to trigger a severe backlash. In the background are populist forces shaping events. This may be what Beijing needs to pay attention to on top of its widely criticised wolf warrior diplomacy.

Related: Japanese academic: The politics behind the name 'Taiwanese Representative Office in Lithuania' | George Yeo: Charm and China in a multipolar world | Serious consequences if Washington allows renaming of Taiwan’s US office | Is the China-EU investment deal doomed? | Securing its place in the world economic order: The EU can't afford to wait for the US