The Communist Party of China has just passed a resolution on the party’s achievements over its 100-year history, the third of such resolutions. Zaobao’s associate editor Han Yong Hong notes that the resolution seeks to turn the page on the past and pave the way for the party’s leadership guided by “Xi Jinping Thought on Socialism with Chinese Characteristics for a New Era”. This includes building a governance framework based on Marxist ideology, and creating a society that supports “whole-process people’s democracy” or “Chinese-style democracy”. Will China be able to beat the West at their own game by seizing the democracy narrative? 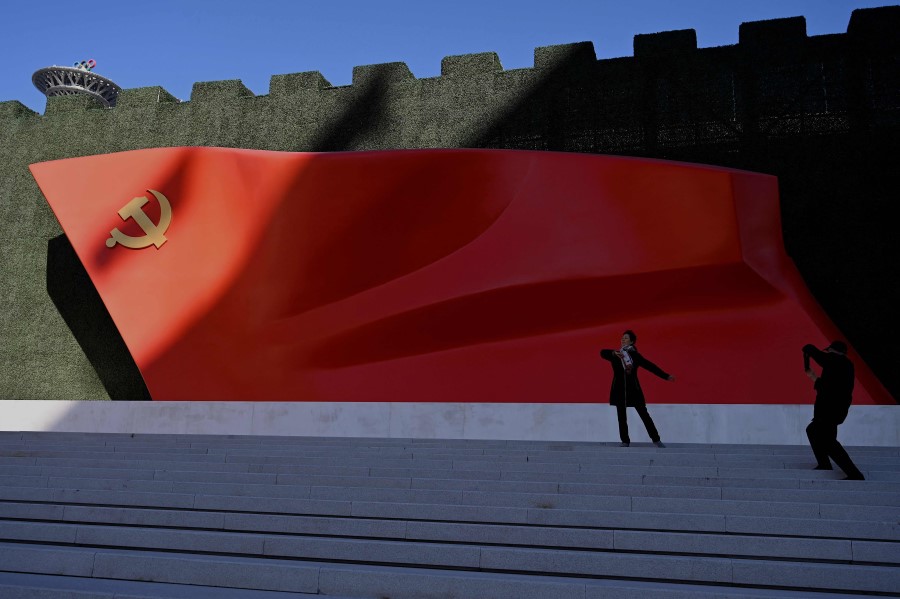 Visitors pose for a picture in front of a national flag sculpture at the Museum of the Communist Party of China in Beijing on 11 November 2021. (Noel Celis/AFP)

Candice Chan - 19 January 2023
The latest announcement of China’s first population drop in six decades has gained much attention, with concerns over the long-term implications for the economy and the community. How will this affect China’s GDP and its aim to overtake the US as the world’s biggest economy? Can China reverse the population trend?
Read more
Translated by Candice Chan on 12 November 2021

For the Communist Party of China (CPC), resolutions on historical issues are never just about history, but more about the country’s future direction and the assessment of its leader. Resolutions are meant to unify party thought and build China’s image over the next few decades.

The third resolution on historical issues in the CPC’s 100-year history was passed at the sixth plenary session of the 19th Central Committee of the CPC, which ended on 11 November. The full text of this “Resolution of the CPC Central Committee on the Major Achievements of the Party’s Centennial Struggle” has not yet been released, but the 7,000-word official communique gives a general idea of the resolution.

As expected, the sixth plenary session did not dwell too much on the past controversies and mistakes of the CPC. The communique did not mention the Cultural Revolution or the Tiananmen incident of 1989, but focused on summarising the party’s successes. Of course, times have changed and the CPC now finds itself in a very different environment from 1945 and 1981, when the first two historical resolutions were passed. The CPC is no longer caught up in fierce conflict. While it does face several crises, both covert and overt, it does not have to handle any intense tussling over direction.

...the CPC has truly assessed that it has succeeded, and this is in line with the feeling in post-pandemic China that the East is rising while the West is declining.

On the contrary, the CPC wants to leverage its 100th anniversary milestone to summarise its achievements and praise how the “endeavours of the Party and the people over the past century represent the most magnificent chapter in the millennia-long history of the Chinese nation”, and set the future direction.

This third resolution is to cement its achievements, in a signalling of the leadership’s strong confidence. This is not to encourage itself or just a show for the people; the CPC has truly assessed that it has succeeded, and this is in line with the feeling in post-pandemic China that the East is rising while the West is declining.

Moving forward, what does the CPC have to fight for in its next century? The communique reveals that apart from the aims that have already been announced, while engaging in the two major aims of rejuvenation of the great Chinese people and building a modern socialist country, the CPC is also ambitious in wanting to build a modern governance framework based on Marxist ideology.

Propagating a governance framework based on Marxism

A few days ago, Professor Wang Hsin-hsien of the Graduate Institute of East Asian Studies at National Chengchi University forecast during an interview with international media that the third resolution was not just for the CPC to process its party history, but also to tell the world about the development of Marxism. He felt that the CPC wanted to become the true successor of two to three centuries of Marxist socialist practice.

Yesterday’s communique said CPC General Secretary Xi Jinping is “the principal founder of Xi Jinping Thought on Socialism with Chinese Characteristics for a New Era. This is the Marxism of contemporary China and of the 21st century. It embodies the best of the Chinese culture and ethos in our times and represents a new breakthrough in adapting Marxism to the Chinese context.”

The communique acknowledged Xi as the main founder of Xi Jinping Thought who has set forth new ideas, thoughts and strategies on building a modern socialist country and developing a Marxist party exercising long-term governance. In addition, since the 18th National Congress, it has worked to “upholding [uphold] the Party’s overall leadership” and ensure “full and rigorous self-governance”. Also, there is a recent political buzz phrase: actively developing “whole-process people’s democracy”.

What ‘whole-process people’s democracy’ is all about

The term whole-process people’s democracy is not new. In fact, Xi had already said it two years ago, just that it did not draw much attention then.

On 2 November 2019, two days after the conclusion of the fourth plenary session of the 19th CPC Central Committee, Xi went on an inspection tour to Shanghai. When he was inspecting a residential community’s civic centre in Changning district, he said that China was on the path of “socialist political advancement with Chinese characteristics” and that China's people's democracy was a type of whole-process democracy where “all major legislative decisions were made after going through procedures and democratic deliberations to ensure that decision-making was sound and democratic”. He also called for more effort to be put in to develop socialist democracy with Chinese characteristics.

...even after achieving rapid economic growth, gaining technological progress, and attaining the general endorsement of the people, the modern Marxist ruling party still needs to return to the topic of democracy to gain a foothold.

At that time, a consultative meeting on a draft law was in progress at the civic centre, and a tall foreign resident was also present at the meeting. Xinhua News Agency later commented that the consultative meeting highlighted the fact that Chinese-style democracy was an exemplar of whole-process democracy.

The buzz created by Chinese-style democracy

The concept of a Chinese-style democracy immediately attracted the attention of foreign media. Strangely though, not only did Chinese state media not offer further interpretations of the term, it hardly mentioned it again. It was not until Xi focused on the discussion of whole-process people’s democracy in mid-October at the CPC’s central conference on work related to people’s congresses that the term resurfaced.

At the meeting, Xi said that China’s whole-process people’s democracy not only has a “complete set of institutions and procedures”, but also “full participation and practices”. He indirectly pointed out that elections and voting are not the only yardsticks for measuring democracy, implying that voting may just be an ornament used for decoration.

But on the mental and emotional level, has whole-process people’s democracy or Chinese-style democracy fully answered the question of how the will of the people can be expressed and implemented?

China is using its self-defined term of whole-process people’s democracy to refute the West’s claim that China lacks democracy. This move is seen as China fighting with the West over speaking rights on democracy in order to solve the long-term problem of being attacked in this area. This in turn shows that even after achieving rapid economic growth, gaining technological progress, and attaining the general endorsement of the people, the modern Marxist ruling party still needs to return to the topic of democracy to gain a foothold. In terms of external perceptions and even the CPC’s self-perception, this is something that has to be addressed.

Undeniably, the CPC has made brilliant achievements over the past century and the system it has put in place has brought about effective governance and development for the country. But on the mental and emotional level, has whole-process people’s democracy or Chinese-style democracy fully answered the question of how the will of the people can be expressed and implemented? And how can one evaluate how much “democracy” there is in whole-process people’s democracy? As the CPC advances, perhaps this issue may need to be addressed with more concrete theories and practices.

Related: Uniting China under Xi Jinping to build a modern socialist country: CPC to pass new 'historical resolution' at sixth plenum | Self-assessment: How will the Chinese Communist Party evaluate the Xi Jinping era thus far? | Chinese youth will be imbued with tenets of Xi Jinping Thought through school curriculum | The most outstanding of CCP leaders? | Can there be a China-style democracy?