Perhaps the theory of the survival of the fittest can help to explain the opposite gender imbalance in rural-urban China. Aspirant males and females head to cities in search of better prospects; the latter, with the added aim of better marriage prospects, invariably outnumber the men. Of the males that stay or return, there is the heavy bride price to pay to win the hand of a lady among the smaller pool of women left in the rural areas. This modern malaise is something no provincial policy can easily solve, says economist Li Jingkui. 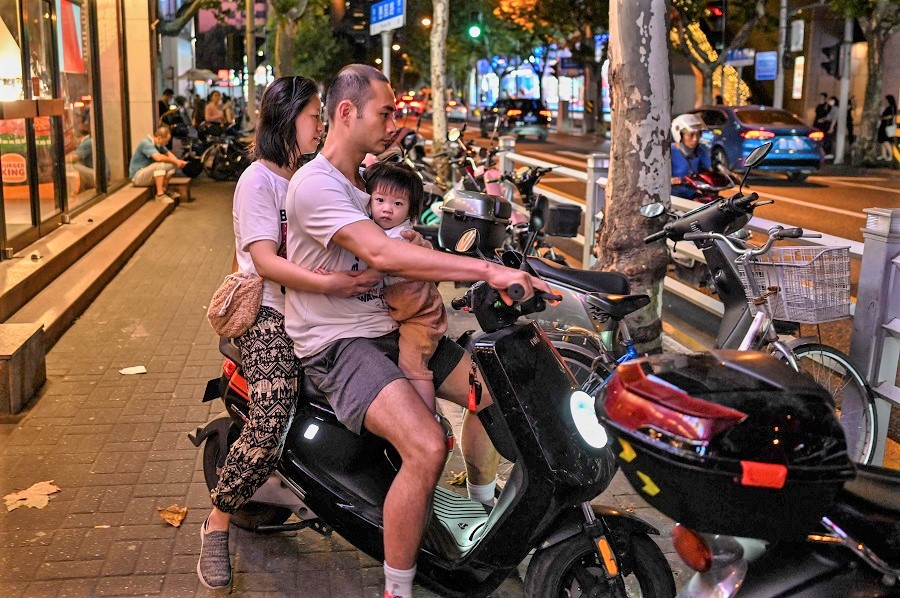 A couple with a child ride on a scooter in Shanghai, China, on 7 September 2021. (Hector Retamal/AFP)

Grace Chong - 23 November 2022
US academic Wu Guo looks at the recent online furore over the mushrooming of state-run communal canteens in China and offers his views from the US. While providing food for the needy should be part of the state's responsibility, there should also be space for civil society, private enterprises and the public to play a role to create kind and healthy communities.
Read more
Translated by Grace Chong on 2 December 2021

The bureau acknowledged that the issue was a common and pressing one, and that the marriage woes of older rural men were no longer just personal problems but social problems. These issues would have an impact on rural social stability and economic development, which would in turn, affect the construction of a new socialist countryside and a harmonious society. Their proposed solution was for young rural women to stay in their hometowns so as to alleviate the gender imbalance.

Dearth of women in the countryside

It is no longer anything new that a large number of older, single rural men — commonly known as shengnan (剩男, lit. “leftover men”) — find it difficult to get married, as observed in the ever-increasing bride price in rural areas.

Associate Professor Liu Yanwu of Wuhan University’s Department of Sociology found that between the 1970s and 1980s, marriage was hardly a burden for most rural households. But since the mid-1990s, marriage expenditure for the male side began increasing, going up to three to four times the annual income of a rural labourer at that time.

...there are 34.9 million more males than females.

Soaring bride prices reflect a serious imbalance in the rural areas. According to statistics from China’s seventh national population census released on 11 May, there are 723.34 million males and 688.44 million females in China. The sex ratio (female = 100; male to female) is 105.07, which means that there are 34.9 million more males than females.

In China’s rural areas, the gender imbalance is more serious. The third agricultural census of Hunan province showed that at the end of 2016, there were 27.5513 million males in Hunan’s rural population. This was 2.9134 million more than the number of females, putting the overall sex ratio at 111.82. Not only that, the sex ratio in all age groups was over 100.

Looking for eligible bachelors in the cities

There are many reasons for the gender imbalance in rural areas, such as an underdeveloped economy and the corresponding traditional mindset of favouring sons over daughters, coupled with the implementation of family planning policies.

...there are more women than men in China’s 15 megacities including Beijing, Shanghai, Guangzhou and Shenzhen.

But the opposite is true in China’s big cities, with the emergence of a massive number of older, single women, commonly known as shengnü (剩女, lit. “leftover women”). Analysing the statistical yearbooks of major cities across the country, we can see an interesting trend: among the registered population, there are more women than men in China’s 15 megacities including Beijing, Shanghai, Guangzhou and Shenzhen.

This phenomenon was first observed in Shanghai in 2009. Later on, it was observed in Beijing in 2017, Guangzhou in 2018 and in Shenzhen in 2019. And this is just its registered population — if we take into consideration the massive volume of non-registered females working in these cities, the proportion of women in major cities may be even higher.

One might therefore ask, why is there such a serious gender imbalance in the country’s regional populations? Why are there more leftover men in rural areas but more leftover women in big cities?

Actually, putting aside specific historical development stages and unique national fertility policies, this is the case with almost every other country in the world. Thus, we cannot solely look at China’s unique national conditions if we want to explain why there are more leftover men in rural areas but more leftover women in big cities. We have to look at the deeper reasons behind this problem.

To answer this question, there is a need to make clear two facts that constitute the premise of our discussion.

One, cities offer more development opportunities than rural areas. Hence, people with higher skills or productive capacities would always prioritise working in the cities. This is what we call an “opportunity fact”.

Two, due to natural gender differences in parenting, females — as opposed to males — would prefer marrying someone with a higher productive capacity. This is what we call a “gender fact”.

...although it is difficult for Female B to carve out a path for herself in the city based on her skill sets or productive capacity, because Male A is in the city, Female B would naturally want to find and marry Male A...

Given the opportunity fact, we can be certain that Male A and Female A will choose to work in the cities because there are more opportunities there and it is more likely that their skills would be put to good use.

Given the gender fact, Female B would also prefer to go to the city for a simple reason: although it is difficult for Female B to carve out a path for herself in the city based on her skill sets or productive capacity, because Male A is in the city, Female B would naturally want to find and marry Male A there as this aids starting a family and raising children. Thus, Female B tends to head to the cities as well.

As a result, Male B gets left behind. It is not that he does not want to live or work in the city, but two challenges stand in his way: one, based on his personal capabilities, it would be difficult for him to outcompete Male A. On the other hand, while Male B may have better physical strength than Female A, jobs that rely on manual labour generally do not pay well. Hence, it is likely that Male B will not outcompete Female A for the high-paying jobs either.

Two, as everyone thinks that there are more opportunities in the city and would want to try their luck there, cities naturally become crowded, which in turn pushes up housing, transportation and relationship costs. In particular, it would be increasingly difficult for an elderly Male B to survive in a city.

Because of these two challenges, it is highly likely that Male B would return to his hometown after he has reached a certain age. After all, given China’s large population and the current degree of urbanisation, it is impractical for the entire population to live in urban areas.

Undoubtedly, Male B could have saved up enough from his years in the city to pay the bride price back in his rural hometown; it is possible that a portion of Female Bs will make their return to rural areas as well. But no matter, the female population in rural areas will still be smaller than the male population, which results in a gender imbalance.

Thus the reason why there are more leftover men in rural areas but more leftover women in big cities can be deduced from basic economic logic. This answer is also corroborated by the empirical evidence provided by Western economists.

Women and their search for better labour and marriage markets

Columbia University Associate Professor Lena Edlund published a paper titled “Sex and the City” in The Scandinavian Journal of Economics in 2005. The paper discussed the reasons for young women outnumbering young men in urban areas of the Western world.

According to Edlund, urban areas offered skilled workers better labour markets, which meant that both male and female skilled workers were attracted to work there. But if this was so, assuming there were more skilled males than skilled females, it would not explain why young women outnumbered young men in urban areas.

The key to this puzzle lies in the asymmetry in marriage markets for men and women. As husbands are tasked with the greater responsibility of supporting the family after marriage, urban areas provide a better marriage market for females, aside from just a better labour market, in that they are more likely to find a richer man in the city who could be a good provider in the marriage.

“Why must women sacrifice their rights?”, “Why aren’t younger men encouraged to work on improving themselves?”...- Chinese netizens

Now, returning to the Xiangyin county case study, the Civil Affairs Bureau’s response received harsh criticism from netizens, who gave retorts such as “Why must women sacrifice their rights?”, “Why aren’t younger men encouraged to work on improving themselves?”, “If the economy is developed and cultural activities in the countryside are revitalised, younger females will naturally stay”, and so on.

On 8 October, staff from the bureau clarified that their response did not mean to discriminate against women or objectify them; they merely wanted to encourage — not coerce — young rural women to stay in their hometowns.

Actually, it is impossible for such proddings to triumph over the strong need for survival, and neither should compulsory measures be adopted as that would only result in greater tragedies.

This article was first published in Chinese by Caixin Global as “为啥农村“剩男”多 大城市“剩女”多”. Caixin Global is one of the most respected sources for macroeconomic, financial and business news and information about China.