Why Chinese women are unwilling to give birth

Respect. Lorna Wei says the nub of the issue in the low fertility rate in China lies in that one word. Growing up in a patriarchal society, daughters in China have for years been looked upon as second to sons. When they become wives, mothers and daughters-in-law, they shoulder the bulk of familial duties while trying to keep their jobs. Any fertility policy should first address greater equality between the sexes. Only when parents are assured that their burdens will be shared can they look forward to having more children. 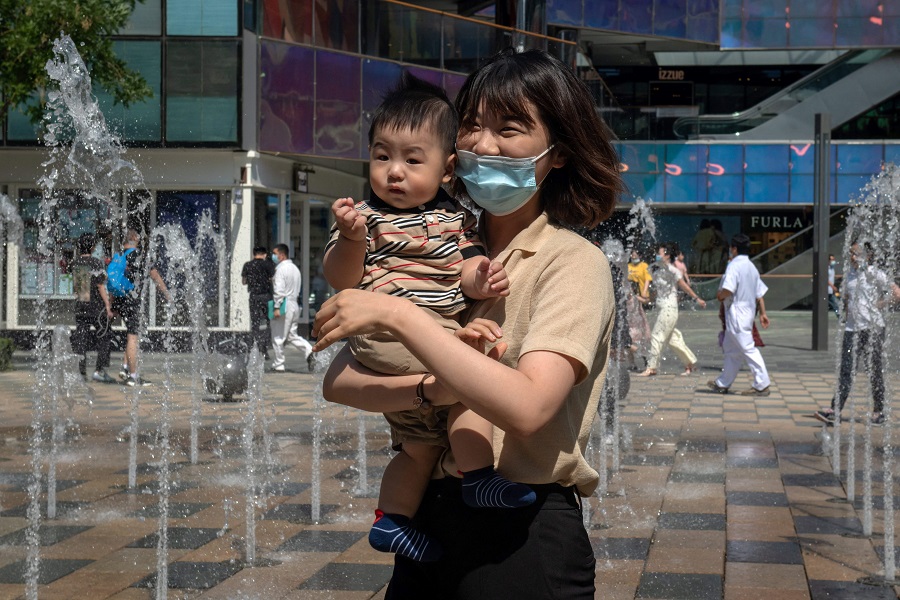 A woman holds her child outside a shopping mall in Beijing, China, on 1 June 2021. (Nicolas Asfouri/AFP)

Grace Chong - 30 January 2023
Amid ongoing tensions, a high-level visit by US Secretary of State Antony Blinken to China in the coming week shows hope for improved relations between the two economic powerhouses. Zaobao correspondent Yu Zeyuan notes that while the meeting may not produce practical results, it is a much needed exchange to manage and control China-US relations from worsening.
Read more
Translated by Grace Chong on 16 June 2021

Four decades ago, Chinese couples tried their best to fight against the one-child policy. Some of them paid huge fines, lost their jobs and ran away from their hometowns to have another child, a son in particular. But now, China’s birth rate is veering into the danger zone with a total fertility rate (TFR) of 1.5, even though the Chinese government abandoned strict restrictions on having babies several years ago. China, with the largest population in the world, has fallen into the low fertility trap, and this trend is unlikely to be reversed.

Many demographers or scholars have come up with suggestions to tackle the ageing population and low fertility issues in China, such as reducing the costs of raising and educating kids, controlling rising housing prices, encouraging women to give birth, and calling on women to better balance family and career. These measures, please forgive my words, are as ridiculous as the three-child policy released in late May. These solutions that seem to benefit women are actually pushing women into the corner because they further deprive women of equal opportunities in the public sphere. Women’s unwillingness to give birth is unlikely to change too.

The condescending and hypercritical investigations on low fertility rate can never find a cure because they treat women as the subordinate class, and regard giving birth as a natural duty of women.

Getting to the root of the issue

Why are Chinese women unwilling to give birth? Though there are several macroanalyses on economics, policies and culture, most scholars have neglected the root cause of low fertility rate in China — female subordination.

The current population studies research in China tends to explain low fertility rate from the perspectives of cultural influence, social system, economic and political reforms and even the development of human beings and the evolution of the universe. Fewer scholars have focused on women, the ones who actually give birth. Most Chinese people regard women’s unwillingness to give birth as trivial complaints or naggings, no matter how many women have shouted their pains and concerns so many times. In news reports, women’s physical and mental pains in fertility are reduced to “women are unwilling to give birth”, from which you cannot tell whether it is a minor cause of the low fertility rate or a direct reprimand. No elaboration on women’s unwillingness to give birth is given in the reports or studies, and their pains are usually generalised as the pressure that all young people face. The condescending and hypercritical investigations on low fertility rate can never find a cure because they treat women as the subordinate class, and regard giving birth as a natural duty of women.

If you are a Chinese woman, it is easy to see why Chinese women no longer want to give birth. Most women of child-bearing age now have experienced the one-child policy. And both they and their parents have been persuaded to believe that “it is better to have one child only” (只生一个好). Girls are always the second choice. The urban women are relatively lucky because their parents did not have to go through gender screening and abortions because of the government’s restrictions. The rural women, however, either could not be born, or were abandoned right after birth.

Some lucky ones survived, but their parents or relatives warn them all the time that they should devote themselves to their brothers, the real descendants of their family. The one-child policy turns into the one-daughter-one-son-policy, which means that a girl is regarded as a half child in rural China. Few of them can go to school, but most of them marry early to earn bride price, and their parents use their bride price to pay their brothers. They do not belong to their birth family or their husband’s family. Their ultimate fate is to carry on the family line by having a son, which is the same mission that ancient Chinese women had a hundred years ago. My words may sound exaggerated or terrifying, but most rural women are expected to devote themselves to the family whether they are directly ordered to do so or not.

The urban women may escape the survival crisis at birth, but they can never escape the male privilege or male-centredness in a society that favours men. No matter how excellent you are, people around you jabber on and on that a successful woman should have a good husband, or at least have a husband. It seems that a woman is born to find a man and rely on him. The term “leftover women” has been coined to warn picky women who refuse to get married early. “Irresponsible single women” seem to be the ones to blame for the country's low fertility rate. "You are ruining the future of the whole nation,” they say.

If women who hold up half the sky share the economic responsibilities of the family, the next step is to call on men to return home, share the domestic work, and work harder to balance career and family.

Can you blame the women?

Body and age anxieties push some women to get married and give birth as soon as possible, at the huge expense of losing their jobs. But it is still too early for them to take a breath. They are expected to have two or three children now (one of them MUST be a boy), do the housework, and hold on to a job at the same time. If she cannot support herself, she’d better pray to Jesus, Buddha or Allah. Please let God make sure that her husband will not cheat on her or abandon her. Otherwise, she’d be labelled a divorcee, a failure in other’s eyes. Some divorced women count themselves lucky even if they are kicked out of their husband’s family without a single cent. The unlucky ones may have experienced domestic violence and even be tortured to death before the 30-day cooling-off period (婚姻冷静期) ends. So, staying single becomes the best solution to all the problems mentioned above.

Moreover, all Chinese women are expected to have a strong faith in marriage and family. Anyone who says bitter things on marriage or childbirth is labelled as evil-minded for starting a gender war or being a feminist. When a country refuses to pay the fertility cost, it shifts the labour to the family unit though advocating filial piety and mutual support. When a man in the family is unwilling to shoulder the responsibility of fertility, he talks about true love and selfless motherhood. When a woman in the family faces tremendous changes in her life, she seeks help from her husband, family and country. At first, the woman thinks that she did not shout loud enough, but later she realises that she married a deaf person or one pretending to be deaf. She also realises that one can be deaf but not mute, because anyone can blame her for the low fertility rate on behalf of her husband, family and country.

Equality is the only cure to the low fertility rate. Though it is true that many men feel pressured and do not want to have babies, we should acknowledge that women are more disadvantaged within the same class. Four decades ago, women could tell themselves that both men and women are having a tough time due to the slow development of the country. But this excuse does not work once living standards improve. Once women realise that they are discriminated against, blamed or unfairly treated in this so-called modern society, they would not be the good wife and loving mother anymore. Once they know that roses are patriarchal baits to give up their bread, women would definitely choose self-preservation first.

If women who hold up half the sky share the economic responsibilities of the family, the next step is to call on men to return home, share the domestic work, and work harder to balance career and family. And then the country provides more social welfare or benefits. We should respect women’s reproductive freedom, appreciate their devotion to giving birth, and help them when they are trapped in gender discrimination. If the low fertility rate is a social issue, giving birth is not a task for women only to shoulder. Respect women. Do your part. Do not fool women again with empty words.

A final gentle reminder. When policymakers draft fertility policy or offer suggestions the next time, please do not wander far and neglect what lies close at hand. Women are major players on the subject of fertility and their needs matter. They are not just numbers or indexes in the population census graphs. If policymakers can keep this golden principle in mind, all problems will be solved, if the true intent is to solve them.