Hanoi is applying its South China Sea playbook to the Mekong. It is putting effort into enmeshing all stakeholders while carefully balancing relationships with major powers interested in the Mekong. What does this mean for Southeast Asia and the region's relationship with China and the US? RSIS graduate research assistant Phan Xuan Dung examines how Vietnam can make a difference. 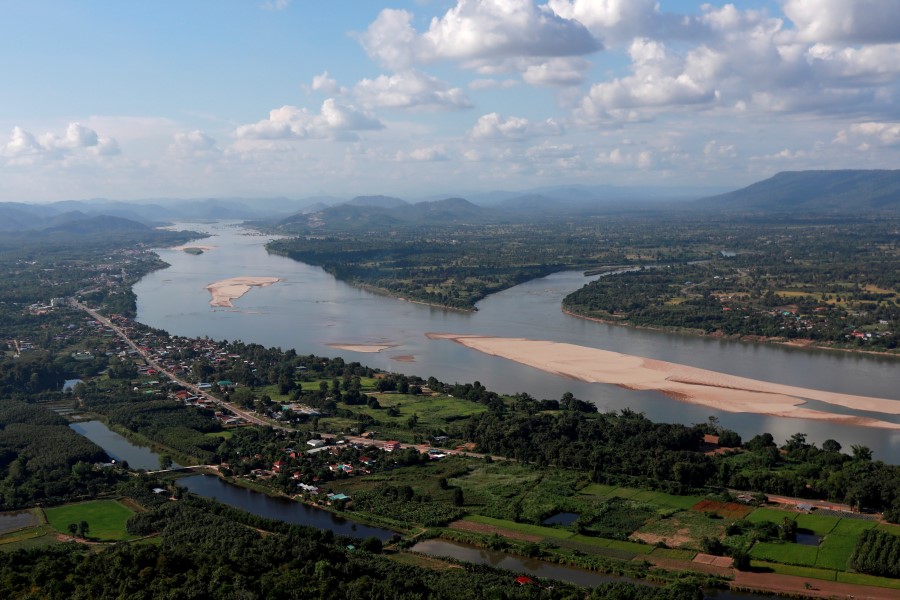 A view of the Mekong river bordering Thailand and Laos is seen from the Thai side in Nong Khai, Thailand, 29 October 2019. (Soe Zeya Tun/Reuters)

Candice Chan - 7 April 2021
China was among the fastest in vaccine development, but its progress in actual vaccinations has not been satisfactory. In this “second season” coronavirus fight to recover economically and reopen borders, vaccinations will be key. Will China resort to the crude measures it used in the early stages of the pandemic fight to increase its vaccination rates? Zaobao correspondent Yang Danxu reports.
Read more

Candice Chan - 7 April 2021
Hong Kong commentator David Ng says that despite the accusations by the West against China of human rights violations in Xinjiang such as forced labour, the region’s economic trajectory and reliance on mechanisation seem to show a quite different truth.
Read more
Translated by Candice Chan on 4 March 2021

Supporting the livelihoods of 18 million people, the Mekong River holds a critical position in Vietnam’s food security and socioeconomic development. The Mekong Delta, or Cuu Long region, is the country’s rice bowl. This fertile region produces half the country’s rice and other flagship agricultural outputs that account for a third of the country’s GDP.

Vietnam, increasingly, is classified as a middle power along with Australia and even Japan, largely based on the behavioural model of the concept that instructs these states to make active and innovative use of multilateral processes to pursue niche diplomacy and espouse regional norms. Vietnam’s multilateral approach toward the South China Sea disputes and promotion of a rule-based regional maritime order are most frequently cited as validation for this classification. But there is another, much less discussed body of water where Vietnam’s middle power credentials are increasingly prominent and needed — the Mekong basin.

Vietnam: securing its interests in the Mekong

Vietnam is anxious about hydroelectric dam construction on the Mekong by upstream countries, especially China and Laos. Critics have long argued that these dams block fish migration and disrupt the flow of nutritious sediment vital for agricultural productivity. Vietnam, as the last in line of the Mekong riparian states, is most vulnerable to these effects. One study estimates that Vietnam could experience a 0.3% loss in GDP, or over US$1.14 billion, due to the negative impacts of upstream hydroelectric dams.

Furthermore, there is increasing evidence that China, the most upstream of the Mekong riparian states, has been controlling the water release at the expense of lower stream countries.

Furthermore, there is increasing evidence that China, the most upstream of the Mekong riparian states, has been controlling the water release at the expense of lower stream countries. Some analysts go as far as to portray the Mekong River as a “second front” after the South China Sea in Vietnam’s geopolitical struggle against China.

In response, in recent years, Vietnam has moved to securitise water resources in the Mekong. Official documents, most recently, the Political Report to the 13th Party Congress, have stressed the task of resource management for better food, water, ecological, and energy security.

Greater leadership in regional water cooperation is much needed. As an emerging middle power with significant stakes in the future of the Mekong, Vietnam can and should do more.

Participating in various inter- and intra-regional cooperative mechanisms, Hanoi has proactively promoted economic connectivity and effective management of shared Mekong resources. Vietnam has contributed to the success of these mechanisms’ summits, particularly by hosting the Greater Mekong Subregion Cooperation (GMS) Summit and the Vietnam-Laos-Cambodia Development Triangle Area (CLV-DTA) Summit in 2018.

This year, Vietnam will lead a cooperative environmental audit to define and assess riparian states’ responsibilities in implementing sustainable development goals in the Mekong River — an initiative proposed by Hanoi.

Bringing in yet balancing stakeholders

As with the South China Sea disputes, Vietnam advocates inclusiveness and multilateralism in addressing the Mekong crisis. Hanoi seeks to enmesh all stakeholders while carefully balancing relationships with major powers interested in the Mekong. In January, Vietnam and the US co-hosted the first Friends of the Mekong Policy Dialogue under the Mekong-US Partnership. Vietnam is also working with China and other riparian states on information sharing, water governance, and flood and drought management through the Mekong-Lancang Cooperation mechanism. On the broader regional level, Vietnam has tried to put water security in the Mekong basin on ASEAN’s agenda.

With mounting environmental challenges posed by human activities, ensuring equitable and sustainable resource management in the Mekong is an urgent task. Greater leadership in regional water cooperation is much needed. As an emerging middle power with significant stakes in the future of the Mekong, Vietnam can and should do more.

ASEAN centrality must not be peripheral to this issue that concerns regional human security and constitutes another geopolitical battleground between the US and China.

First, Hanoi should work closely with other stakeholders to strengthen existing water governance institutions. An immediate course of action should be calling for the development of a code of conduct on the utilisation and preservation of Mekong river resources between MRC signatories (Vietnam, Thailand, Laos, and Cambodia). Hanoi’s ‘special relations’ with Vientiane and Phnom Penh and the CLV-DTA provide opportunities to engage with the two neighbours on this matter. Vietnam should also enlist diplomatic support from key development partners such as the US, Japan, and the EU.

Second, Vietnam can take the lead in promoting renewable and alternative sources of energy to ease riparian states’ reliance on hydropower dams. The country has been accelerating solar and wind power capacity development and is leading Southeast Asia in this regard. Greater investment in green energy for national development will reduce Vietnam’s need to import electricity from Laos, a dilemma that has constrained Hanoi’s efforts to persuade Vientiane to reconsider its dam-building activities.

Finally, Vietnam needs to keep raising the profile of the Mekong basin in ASEAN platforms. Vietnam’s enhanced reputation, buttressed by its competent Covid-19 response and successful 2020 ASEAN chairmanship, should enable the country to exert more influence in Southeast Asian security governance. ASEAN centrality must not be peripheral to this issue that concerns regional human security and constitutes another geopolitical battleground between the US and China.

This article was first published by ISEAS – Yusof Ishak Institute as a commentary in Fulcrum.