Russia-China alliance: 'No limits' does not mean 'no bottom line'

International observers have pushed China’s possible role in the crisis under the spotlight since the outbreak of the Russia-Ukraine war. The previously touted “no limits” in Russia-China relations has raised concerns over China’s support of Russia as the latter continues its aggression against Ukraine. However, US-based academic Zhou Nongjian believes that this friendship is not unconditional, and there are bottom lines that should not be crossed. 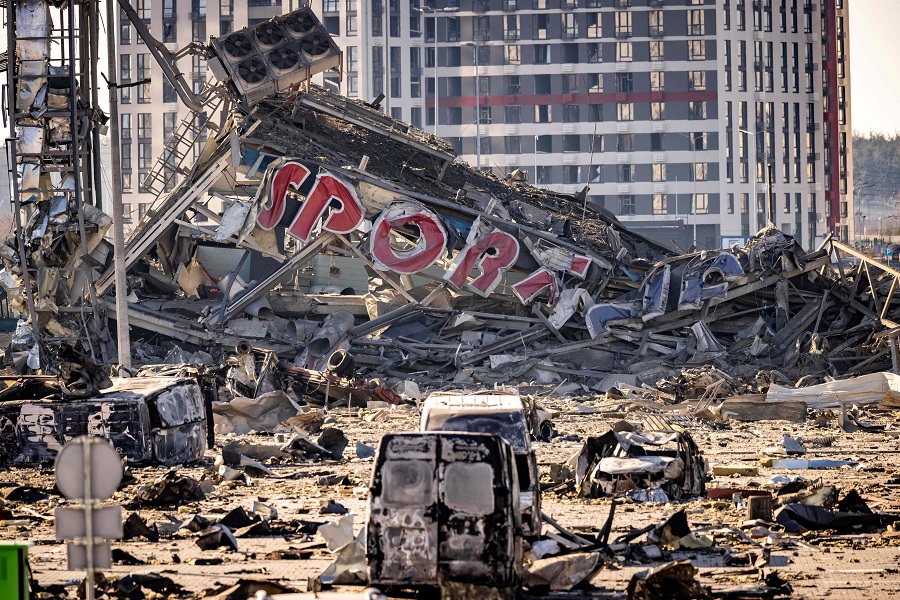 A picture taken on 21 March 2022 shows a view of the damage at the Retroville shopping mall, a day after it was shelled by Russian forces in a residential district in the northwest of the Ukrainian capital Kyiv. (Fadel Senna/AFP)

Grace Chong - 23 November 2022
US academic Wu Guo looks at the recent online furore over the mushrooming of state-run communal canteens in China and offers his views from the US. While providing food for the needy should be part of the state's responsibility, there should also be space for civil society, private enterprises and the public to play a role to create kind and healthy communities.
Read more
Translated by Grace Chong on 28 March 2022

China-Russia relations have been warming up in recent years. Prior to the outbreak of the Russia-Ukraine war, close relations between China and Russia even reached a high point, with a joint statement released stating that there are "no limits” to the friendship between the two countries.

Following the outbreak of the Russia-Ukraine war, most countries have condemned Russia for invading Ukraine and have slapped Russia with unprecedented international sanctions. In this situation, the world is watching how China handles its relations with Russia.

There may be no limits to friendship, but it does not mean that one’s bottom line can be crossed at will.

A common interpretation of “no limits” in China-Russia relations is that of friendly relations and mutual support between the two countries. In other words, China can go all out for Russia, say yes to all its requests and give it full support.

But it is no longer important whether this was the original intention. What’s important is that at present, the international situation has changed abruptly as a result of the Russia-Ukraine war and the world has formed a new perception of Russia. It did not expect Russia to brazenly invade a sovereign state; it did not realise that Russia is not as powerful as expected; it did not expect international sanctions on Russia to be so severe. Hence, it is necessary for China to also have a new understanding and assessment of its relations with Russia.

Under the premise of peaceful development, the advancement of trade and economic relations, interconnectivity and business relations between China and Russia is unlimited and boundless, and are beneficial for both countries.

However, when one party ignores international law and initiates war in such a rash and risky manner, inviting widespread condemnation, severe economic sanctions and putting itself in a precarious position, should the other party still unconditionally support such reckless behaviour that entails painful consequences? One’s bottom line comes into question here.

Support for another country should not harm the country’s own interests.

The bottom line of China-Russia relations involves the following aspects:

One, international morality — that is international law, the basic norms of contemporary international relations and the Five Principles of Peaceful Coexistence that China adheres to. Mutual respect for sovereignty and territorial integrity as well as mutual non-aggression are bottom lines that must not be crossed. It is also what China should uphold to maintain a moral image on the international stage.

Two, national interests. Support for another country should not harm the country’s own interests. This is another bottom line. A country does not have the obligation or necessity to shoulder or share the damage incurred by another country from violating international law and the basic norms of contemporary international relations. Russia is currently faced with widespread international condemnation and strict sanctions because it invaded Ukraine. There is no need for China to acknowledge or support such invasions and in turn bear or share the moral and economic repercussions.

Three, historical experience. The history of China and Russia since modern times should serve as a reference for present-day relations between two countries. Since modern times, China and Russia have flip-flopped between being allies and adversaries. Historically, the Russian Empire was the entity that has occupied the most Chinese territory, and in the 1960s and 1970s, China considered the Soviet Union its greatest enemy and a “polar bear” that advocated social imperialism.

When facing a country that still relies on military might and disregards the norms of contemporary international relations, China, who was once a victim, should always remain vigilant and leave some room to manoeuvre. This is also a bottom line in another sense. In other words, China should remember the lessons from history and not be fooled by a momentary friendship nor help Russia conquer land and expand unreservedly. It would be no different from cherishing a snake in one’s bosom if Russia becomes an enemy again in the future.

Fourth, ending the war and achieving peace. The Russia-Ukraine war has not only destroyed countless lives and led to a humanitarian disaster, it has also negatively impacted the global economy, including China’s, due to the international sanctions and economic blockades imposed on Russia. Ending the war as soon as possible is the hope of most countries, and is in China’s interests. As the one that started the war, Russia holds the initiative to end it, and ending the war is essentially a matter of Russia stopping its attacks on Ukraine and withdrawing its troops.

... even if it is done out of friendship, military and economic assistance to Russia should not come before the war ends, but after.

With mediation unable to stop Russia from doing as it pleases, one possibility to ending the war is to limit Russia’s military and economic resources, such that they are incapable of sustaining the war. Thus, before peace and the end of the war can be achieved, any military or economic assistance to Russia the aggressor is no different from adding fuel to the fire — it is prolonging the war, which goes against the objective of ending it.

And so, even if it is done out of friendship, military and economic assistance to Russia should not come before the war ends, but after. This is in line with ending the war, and in line with China’s interests.

Now, some people in China are pro-Russia, and are worried that if China does not help now, Russia will crumble. This is over-thinking, because what Russia is facing today is not an invasion by enemies or natural disasters. It is completely capable of ending the war that it started, and walking out of its dire situation. Then it would not have the problem of insufficient military resources. Once peace is achieved, international sanctions would be gradually lifted, and Russia’s economic plight would be eased. As the instigator of the war, Russia will not crumble as a result of ending the war and withdrawing its troops.

... it would be inappropriate to supply resources in the midst of war and give Russia more hope for one more roll of the dice.

As for some observers worrying that Russia’s strength, as well as the China-Russia alliance against the US, will take a hit because the war did not go in Russia’s favour, there is another way to look at the situation. Firstly, Russia was not strong enough to begin with and the war only exposed its weakness and flaws that have existed over the past few decades, which will not improve simply by supporting it to continue the war. Also, as long as the war does not end, under the dual impact of the continued cost of fighting the war and international sanctions, Russia’s strength will only take a bigger hit.

Putting aside the rights and wrongs associated with a China-Russia alliance against the US, if one is sincere about one's friends and really has the bigger picture in mind, and given that Russia is already in deep trouble, even if China is unable to persuade Russia to stop the war and cut its losses as soon as possible, it would be inappropriate to supply resources in the midst of war and give Russia more hope for one more roll of the dice. That would exacerbate the situation, which would be detrimental to the big picture.

Peaceful development is the way to go. For all parties, only with peace will there be growth. Once the war ends and there is peace, Russia will need to rest and recover — this will be the rare opportunity for China to deepen China-Russia trade relations and advance its economic ambitions with “no limits”. Furthermore, China can also play a constructive role as Ukraine rebuilds itself after the war.

Related: China’s alliance with Russia is solidifying | The importance of Russia in China's foreign relations | Fifty years after Nixon's visit, is China tilting back towards Russia? | Did China miscalculate the Ukraine war? | Does Beijing benefit from US-Russia confrontation over Ukraine? | Must China choose sides in the Russia-Ukraine war? | Can China benefit as a bystander in the Russia-Ukraine crisis?