ISEAS academic Ian Storey thinks that despite what China has said about wanting to uphold peace and stability in the South China Sea, in mid November, China Coast Guard vessels prevented two Philippine Navy ships from delivering supplies to a group of Marines on Second Thomas Shoal. This can be seen as another of China's attempts to assert its claims in the South China Sea, which an arbitral tribunal ruled in 2016 were incompatible with UNCLOS for which China is a signatory. Is China not abiding by its promise? 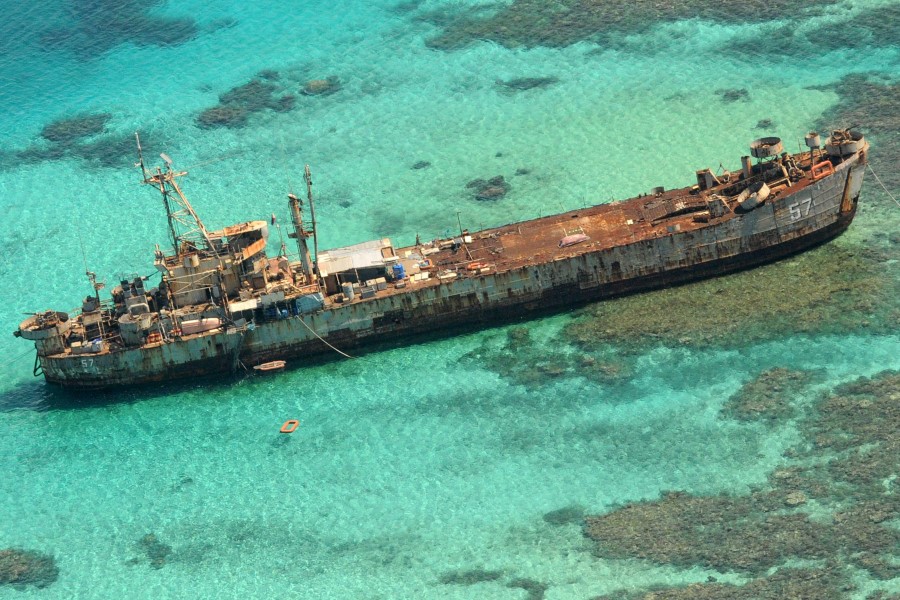 This file photo taken on 29 March 2014 shows a Philippine Navy vessel that has been grounded since 1999 to assert the nation's sovereignty over the Second Thomas Shoal, a remote South China Sea reef also claimed by China. (Jay Directo/AFP)

Candice Chan - 5 August 2022
China's "Foundation Plan" for iron ore has gained much official support, and is aimed at reducing reliance on foreign sources of iron, including Africa and Australia. The only way to do this effectively is for China to ramp up mining of its own iron resources. However, these resources are scattered and difficult to access, and of lower grade. This means China has its work cut out if it is to succeed.
Read more
Translated by Candice Chan on 29 November 2021

On 16 November, three China Coast Guard (CCG) vessels tried to ram, and then used water cannons to prevent two Philippine Navy (PN) ships from delivering food and other supplies to a group of Marines on Second Thomas Shoal.

Such attempts by China to prevent the PN from resupplying its troops on Second Thomas Shoal in the Spratly Islands are nothing new. Tense skirmishes took place in 2013, 2014, and 2018. But the most recent stand-off should be viewed as more than just another cat-and-mouse incident to add to the list — China’s move against the Philippines was another attempt to use domestic legislation to assert its expansive maritime claims in the South China Sea. Worryingly, Beijing’s new tactic could raise tensions in the disputed waters a notch higher.

Manila has managed to sustain, by the skin of its teeth, a "post-apocalyptic military garrison" of around a dozen Marines on the World War II-vintage decaying rust bucket. The CCG and Chinese Navy maintain a near-constant presence around the shoal.

Second Thomas Shoal lies 120 miles northwest of Palawan Island, close to the large Chinese military base on Mischief Reef, and within the Philippines’ 200 nautical mile exclusive economic zone (EEZ). It is a low-tide elevation that is not entitled to a 12 nautical mile territorial sea or an EEZ.

In 1999, the PN deliberately ran aground an ex-US landing ship tank, the BRP Sierra Madre, on Second Thomas Shoal. Manila called the incident an "accident" though in fact it was done to assert the country’s sovereignty over the atoll. Ever since, Manila has managed to sustain, by the skin of its teeth, a "post-apocalyptic military garrison" of around a dozen Marines on the World War II-vintage decaying rust bucket. The CCG and Chinese Navy maintain a near-constant presence around the shoal.

According to Beijing, the two Philippine boats were guilty of "trespassing" into the territorial waters of Second Thomas Shoal. The CCG "performed official duties in accordance with law and upheld China’s territorial sovereignty and maritime order".

In his usual forthright manner, Philippine Foreign Secretary Teodoro Locsin fired off a protest, accusing the CCG of acting illegally, violating the country’s sovereignty and threatening the "special relationship" between Manila and Beijing. A few days later, at the virtual ASEAN-China special summit, President Rodrigo Duterte issued a rare rebuke to President Xi Jinping over the incident. On 23 November, Defence Secretary Delfin Lorenzana posted on his Facebook page that the PN had successfully resupplied the troops Second Thomas Shoal though the CCG was continuing to harass operations.

...it was the first time Beijing had justified its belligerent actions by invoking a new law — the Maritime Traffic Safety Law (MTSL).

The 16 November fracas differed from previous Sino-Philippine stoushes at the shoal, as it was the first time Beijing had justified its belligerent actions by invoking a new law — the Maritime Traffic Safety Law (MTSL).

Adopted by China’s National People’s Congress in April, the MTSL came into effect on 1 September. The legislation is aimed at "strengthening maritime traffic control" and "safeguarding the rights and interests of the State" and is applicable to "sea areas under the jurisdiction of the People’s Republic of China" including, according to a 1992 law, islands claimed by China in the South and East China Seas.

Under the MTSL, foreign vessels must seek permission before entering or leaving China’s territorial waters. Vessels, including warships, in violation of the law, can be fined, ordered to leave or expelled. Earlier this year, another piece of Chinese legislation authorised the CCG to "use all necessary measures, including weapons" against foreign vessels deemed to be illegally infringing China’s sovereignty, sovereign rights or jurisdiction, including in its claimed territorial waters.

The MTSL is in violation of international law. Under Article 24 of the United Nations Convention on the Law of the Sea (UNCLOS), coastal states cannot enact laws which impair the right of innocent passage through the territorial sea.

Thus, when the law came into effect, the US Department of Defense called it a "serious threat" to freedom of navigation. To drive home this point, the USS Benfold conducted a freedom of navigation operation a week later by sailing through the territorial waters of Mischief Reef without seeking prior consent. Echoing the US view, Philippine defence chief Lorenzana said Manila would not comply with the MTSL in what Manila calls the West Philippine Sea.

Some observers speculated that China might not invoke the MTSL in disputed waters, much like the establishment of its air defence identification zone (ADIZ) over parts of the East China Sea in 2013. But the 16 November incident was a clear signal that Beijing intends to enforce it if it so chooses.

...it represents another attempt by China to assert its jurisdictional claims in the South China Sea which an arbitral tribunal ruled in 2016 were incompatible with UNCLOS.

First, it represents another attempt by China to assert its jurisdictional claims in the South China Sea which an arbitral tribunal ruled in 2016 were incompatible with UNCLOS.

Second, if incidents such as the one that took place at Second Thomas Shoal become a regular occurrence, it raises the risk of a dangerous confrontation at sea between the CCG (with the Chinese Navy not far behind) and a Southeast Asian warship or coast guard vessel which might escalate into a bigger crisis. As Locsin pointed out in his protest note, Philippine government vessels are covered by the US-Philippines 1951 Mutual Defence Treaty. A bust-up over Second Thomas Shoal could, in theory, trigger a US military response in support of the Philippines.

Ironically, six days after the PN ships were forced to abort their mission to Second Thomas Shoal, China joined with ASEAN in agreeing to uphold UNCLOS, promote maritime safety and security, maintain peace and stability in the South China Sea, preserve freedom of navigation and exercise self-restraint. Unfortunately, its actions at Second Thomas Shoal suggest otherwise.