In the face of surveillance camera footage showing pet dogs biting an 80-year-old lady, it should have been an open-and-shut case. But one such “dog-bites-man” incident in Anyang dragged on for more than two months. The pet owner was believed to be a person of power, and only increasing attention on the case led to an eventual apology. Why did it take so long for someone to do the right thing? 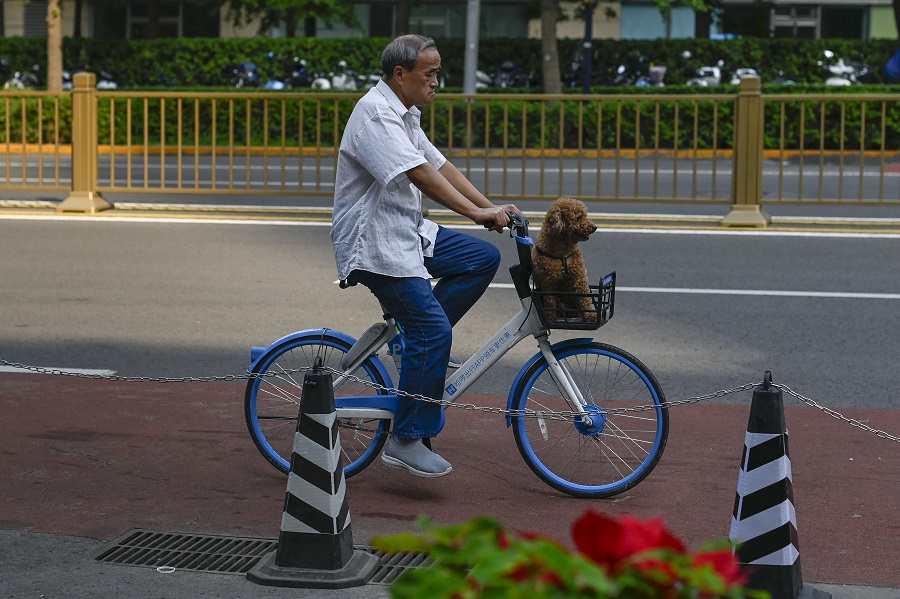 An elderly man rides a sharing bicycle with his dog in a basket along a road in Beijing, China, on 23 September 2021. (Wang Zhao/AFP)

Grace Chong - 1 July 2022
Masayoshi Son, billionaire head of SoftBank Group Corp. may finally be able to push ahead with launching a US IPO for semiconductor and software design giant Arm Ltd., after wresting control of Arm China back from ousted CEO Allen Wu. It was no mean feat and a saga of twists and turns. But even now, some questions of Arm China’s shareholding and business remain unanswered.
Read more
Translated by Grace Chong on 22 November 2021

There is a saying in the news industry: “When a dog bites a man, that’s not news because it happens so often. But if a man bites a dog, that’s news.” But in Henan’s Anyang, a “dog bites man” incident still made it to the top of internet searches.

On 20 September, an almost 80-year-old Madam Geng was strolling in a residential compound when she ran into a woman walking her two large dogs. When they came face to face with each other, the two dogs suddenly pounced on Madam Geng and bit and scratched her. This scene was captured by the surveillance cameras in the residential compound.

From the video, this is a simple case of “dog bites man”. However, the dog owner refused to admit that the incident took place, and was unwilling to apologise to Madam Geng or offer her compensation. Left with no choice, Madam Geng’s daughter reached out to Henan Television’s lifestyle programme “Xiaoli Bangmang” (《小莉帮忙》, Xiaoli to the Rescue).

Xiaoli Bangmang dedicated nine episodes to this incident. During the programme, dog owner Wang Xingang (husband of the woman who walked the dogs) said after watching the surveillance footage that he has “never believed in such videos”. He added that Madam Geng’s wounds must have been from a fall, and claimed that he wanted to sue Madam Geng’s family for defamation. Over a period of two months, Wang Xingang never admitted that his dog bit someone and he refused to apologise.

When Xiaoli, the programme host, got to know that Wang Xingang was an official in the comprehensive administrative enforcement division in the market regulation department of Anyang city, she accompanied the family members of Madam Geng to Wang’s office to see how the situation could be resolved. During this process, a group of people came out from the office and clashed with the host and Madam Geng’s family members. Some of them even had batons and gears capable of inflicting harm.

Following which, Wang claimed that he was hospitalised, and various departments such as Wang’s workplace, property management, the urban administrative and law enforcement bureau, and public security bureau declined to respond to questions from Madam Geng’s family members and the host.

Seeing that there was no progress after two months, Xiaoli cried on television and apologised for not being able to help the victim.

Xiaoli’s tears triggered a wave of public opinion and various media began covering Anyang’s “dog bites man” incident. Some netizens guessed that Wang Xingang was so arrogant because he was a relative of Anyang vice-mayor Wang Xinting. Soon, the incident became widely described as one of power play, and Anyang and even Henan authorities became greatly pressured by public opinion.

Imagine: without the intervention and perseverance of Xiaoli Bangmang, and without the host shedding helpless tears bringing public attention to the incident, it would have been impossible for Madam Geng and her family to get any sort of accountability...

Thus the incident reached a turning point. Just as relevant departments in Anyang rushed to clarify that Wang Xingang and Wang Xinting were not relatives, Wang Xingang was suspended and asked to cooperate with the investigations.

On 19 November, Wang Xingang, who previously refused to admit that his dog bit Madam Geng, “sincerely apologised” to Madam Geng personally and said that he was willing to compensate her. The victim was magnanimous and said that an apology would suffice, declining compensation.

While it seems like this incident has come to an end, it is indeed infuriating that the incident took so long to be resolved, considering the fact that it was obvious whose responsibility it was. It is also maddening that a government official violated regulations by keeping large dogs in a residential compound, and even blatantly denied that his dogs bit someone in front of the media, haughtily exhibiting the “so what?” attitude.

Imagine: without the intervention and perseverance of Xiaoli Bangmang, and without the host shedding helpless tears bringing public attention to the incident, it would have been impossible for Madam Geng and her family to get any sort of accountability — more difficult than the protagonist in the Zhang Yimou movie The Story of Qiu Ju, about a peasant woman who takes on the bureaucracy to seek justice for her injured husband.

At the same time, the incident also reflects the helplessness of the media.

When only a wave of public opinion can turn the tide

The incident shows that there is a lack of channels and framework in China for resolving grassroots conflict. This obvious, evidenced case of a dog biting a human was reported by the victim and the media, but the city authorities, public security department and the dog owner’s workplace did not effectively respond. One of the reasons is that the victim does not have social connections or much of a background, while the dog owner is an official with a government administrative department and can “look down” on the victim.

At the same time, the incident also reflects the helplessness of the media. Xiaoli Bangmang is well known in Henan, but even after ten episodes, this seemingly simple problem was still not resolved; in the end, it took the host’s tears to spark the sympathy and support of the entire country and put pressure on the local authorities, leading the authorities to investigate and the dog owner to apologise.

A question of power and privilege?

Over the past couple of days, the media in China has also published many pieces asking why this case was not resolved. On 21 November, the China National Radio website ran a piece saying that the incident developed as it did because of the dog owner’s behaviour and also because the local authorities and public security department were not doing their jobs. Why was prompt action not taken against the dog owner and the dog? Why was this large dog that was supposed to be a prohibited breed certified as a “psychological support” dog even while the show was being aired? Does Wang or his family need psychological counselling? Why did the authorities not act even after so many episodes of the show were released, but an online stir led to immediate results?

Henan local media dahe.cn also posted an article questioning why nine media reports over two months with clear facts and ample evidence did not lead to a sincere apology from the dog owner. Looking back at the incident, Wang’s unreasonable bullying is infuriating, while the silence of his work department is puzzling. Why is it so difficult to show some accountability to the elderly victim and reveal the truth to the internet community?

In the end, this incident is fundamentally a clash between an individual’s legitimate rights and the privileged class.

The article noted that for a simple civil dispute to stir up a wave of public opinion is not just expending public sentiment, but also a waste of public resources. The lesson from this incident is deep: Wang’s apology is not only necessary as a payback for his bad personal behaviour, but is also atonement for wasting public resources. Taking responsibility for one’s actions is a basic administrative principle, and his work department need not and should not take the blame for his personal behaviour. No one else can shoulder the blame for this incident.

In the end, this incident is fundamentally a clash between an individual’s legitimate rights and the privileged class. And if the sense of privilege is not removed, similar incidents will play out. After all, when it comes to upholding one’s rights, ordinary people are not always given attention by the media and public.