Some analyses have sounded the alarm of China lurching to the left in a marked return to Maoism. On closer examination, says Loro Horta, China’s recent clampdowns on capital are rational and not exactly ideologically driven. Issues facing China, such as the need to tackle rising inequality, affect the ruling party’s legitimacy and longevity. These concerns may have a strong push effect on the authorities. In fact, rather than a reversion to Maoism, the Xi government seems to be embracing Confucianism as a basis to enforce social order and norms, just as it derides “evil fan culture” as a means to keep a tight rein on social control. 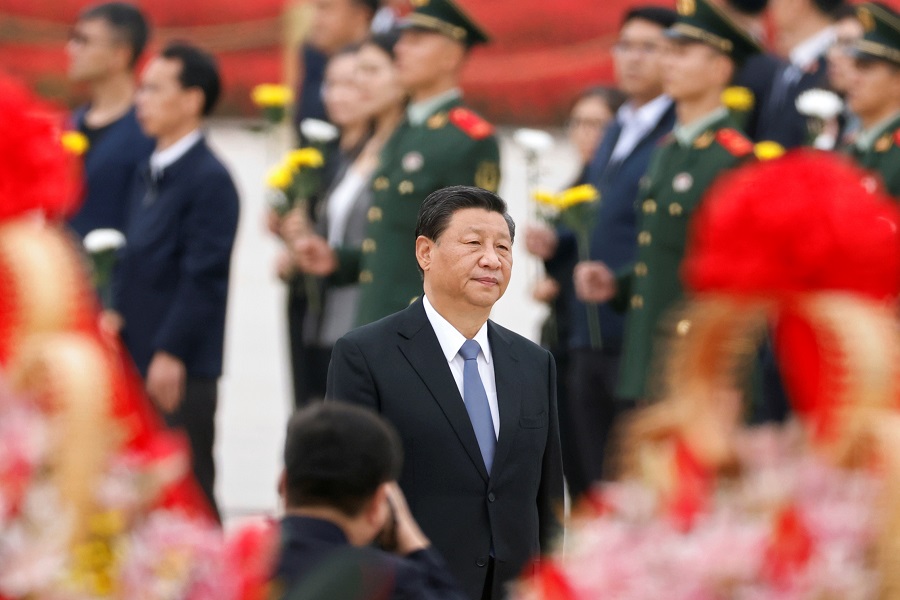 Chinese President Xi Jinping arrives for a ceremony at the Monument to the People's Heroes at Tiananmen Square to mark Martyrs' Day, in Beijing, China, 30 September 2021. (Carlos Garcia Rawlins/Reuters)

Grace Chong - 5 December 2022
Through the eyes of her cat Pudding, Beijinger Lorna Wei gives a snapshot of her daily life when her residential building went under lockdown last week.
Read more
Translated by Grace Chong on 19 October 2021

In recent months the media has been replete with analyses and commentaries arguing that China is returning to Maoism. President Xi Jinping’s appeals for a more equitable distribution of wealth have led some to conclude that China is shifting more to the left. Xi’s new policy came to be known as “common prosperity”. Under this policy, the Chinese government has clamped down on large private companies by a variety of means such as fines for tax evasion as well as breaking up large companies and imposing stricter restrictions on their activities. The aim of these measures is supposedly to force the wealthy private sector to contribute more in helping the state assist the poor.

This clampdown on the private sector and emphasis on wealth redistribution has been interpreted by some as a return to a more socialist approach to the economy and a return to Maoism. In parallel with the common prosperity policy, the CCP has also launched a major campaign to impose stricter controls on the entertainment industry, clamping down hard on what it calls “evil fan culture”. These actions have led some to argue that a new Cultural Revolution is underway in China and the country is returning to Maoism.

However, a closer analysis of these recent policy changes and the context in which they are taking place reveals a far more complex picture. A more careful examination of Xi’s background and past record raises more questions over his alleged Maoist tendencies.

‘To get rich is glorious’

“To get rich is glorious,” paramount leader Deng Xiaoping once said. Judging by the Chinese government’s latest actions, Xi seems to be saying, “To be rich is glorious, but don’t be too greedy.” Xi is not abandoning capitalism as some have argued. Instead he is being forced by social and economic circumstances to tame it. Before the Covid-19 pandemic, China was already experiencing an economic slowdown. The trade war with the US and the ensuing pandemic further exacerbated its economic prospects. In 2014, the Chinese economy grew by 7.4%; in 2020 it grew at a mere 2.3%.

Xi has not framed common prosperity in Maoist terms. Rather, he has emphasised social justice and stability. The Chinese leadership has no desire to abandon capitalism.

Economic growth is vital for the legitimacy of the CCP and for the stability of the country. More dangerous than a slowing economy is the growing level of inequality in Chinese society. The latest figure for China’s gini coefficient (GNI), a measure of inequality that ranges from 1 to 100, is 38.5. China is becoming one of the most unequal societies in the world. Chinese leaders believe that a GNI above 40 can lead to social unrest. Inequality is even more striking between rural and urban areas.

Therefore, fighting inequality for the Chinese leadership is not a matter of doctrinal ideological debate between capitalism and socialism but one of survival. Xi has not framed common prosperity in Maoist terms. Rather, he has emphasised social justice and stability. The Chinese leadership has no desire to abandon capitalism. Many in the current leadership of the Chinese state including Xi Jinping have suffered under Mao’s lunacy of the Cultural Revolution and saw their parents humiliated. In fact, Xi’s father Xi Zhongxun was purged during the Cultural Revolution, during which he was demoted from vice-premier to the deputy director of a tractor factory. Xi Jinping himself was sent to a remote rural village for “re-education”.

Not surprisingly, Xi Jinping has not spoken much about the Cultural Revolution and since he came to power, Chinese state media has portrayed it as a mistake not to be repeated.

As such the current policy of common prosperity should not be viewed as a return to Maiosm, but rather a genuine attempt to reduce inequality in order to ensure national stability and the survival of the communist state. In the US, several state and federal governments have throughout history declared war on poverty. Common prosperity is nothing but a campaign against inequality. Growing inequality is not a Chinese phenomenon. It is a global one.

...common prosperity and references to Mao Zedong in Chinese state media are also aimed at neutralising the more leftwing factions in the CCP, particularly in the poorer Western provinces.

Economic nationalism rather than Maoism

The Chinese state strategy to tackle inequality is to strengthen state capitalism in relation to the private sector. Xi has demanded that the rich in China do more to help the poor. This is not much different from the demands that some Democrats in the US make for higher taxes on the rich. When it comes to the economy, Xi is not a socialist, let alone a Maoist. Xi and the top Chinese leadership are economic nationalists, similar to South Korea’s military in the 1960s-1980s. The current Chinese leadership is very well aware that capitalism was what made China strong and that a return to Maoism will be a disaster.

Ironically, common prosperity and references to Mao Zedong in Chinese state media are also aimed at neutralising the more leftwing factions in the CCP, particularly in the poorer Western provinces. In 2012, Bo Xilai, the then party chief in Chongqing, made extensive use of populist Maoist slogans and rising inequality to challenge Xi Jinping for the leadership. Bo Xilai and his ally Zhou Yongkang, a powerful figure in charge of China’s domestic security services, were eventually defeated and arrested. To avoid similar challenges from emerging, the current CCP leadership makes use of Maoist rhetoric from time to time, to neutralise possible neo-Maoist populist leaders.

The recent attempts by the Chinese state to exert greater control over the cultural and social life of its citizens differ in significant ways from the Cultural Revolution. Mao sought to destroy traditional Chinese culture and hierarchy. Students were encouraged to abuse and beat their teachers while children were told to disrespect their parents. Chinese art and books were destroyed in a festival of vandalism. Under Xi, the opposite has taken place. Confucianism with its hierarchical social structure and its social norms is attractive to the CCP. Xi is using traditional Chinese culture to counter Western liberal influences. Buddhism has also witnessed a revival under Xi.

In a world of social media and a new generation eager for its own views, social control is vital for the CCP.

Despite the differences, there is one important similarity between the Cultural Revolution and Xi’s policies: power and control. Mao sought to destroy traditional Chinese culture to maintain his power. Xi Jinping is using traditional Chinese culture to enforce hierarchy and loyalty to the state. In a world of social media and a new generation eager for its own views, social control is vital for the CCP. The fact that some celebrities have millions of loyal followers makes the CCP uneasy, especially when some of these celebrities are critical of the government. Hundreds of millions of youths outside the CCP’s spell can be dangerous.

In terms of his cultural and philosophical outlook, Xi is a conservative strongly influenced by Confucianism and an economic nationalist with a strong preference for state capitalism. Many forget that while China has been “communist” for 72 years, it has been Confucian for thousands of years. To understand Xi Jinping, one must look into the Chinese classics and not into Mao’s little red book. At a time when China finds itself internally divided and sees itself under siege from abroad, national unity and social conformity are paramount for the CCP. It is in this context that the current campaigns must be understood.