Funding wars between China and the West: The politics of bankrolling developing countries

While several alternatives to China's Belt and Road Initiative have sprung up, such as the G7’s Build Back Better World and the EU’s Global Gateway, developing countries are not exactly facing a buffet spread of options, as each avenue comes with strings attached. Only time will tell if China will turn out to be a more benevolent lender and if the new Cold War will bring better spoils for developing countries. 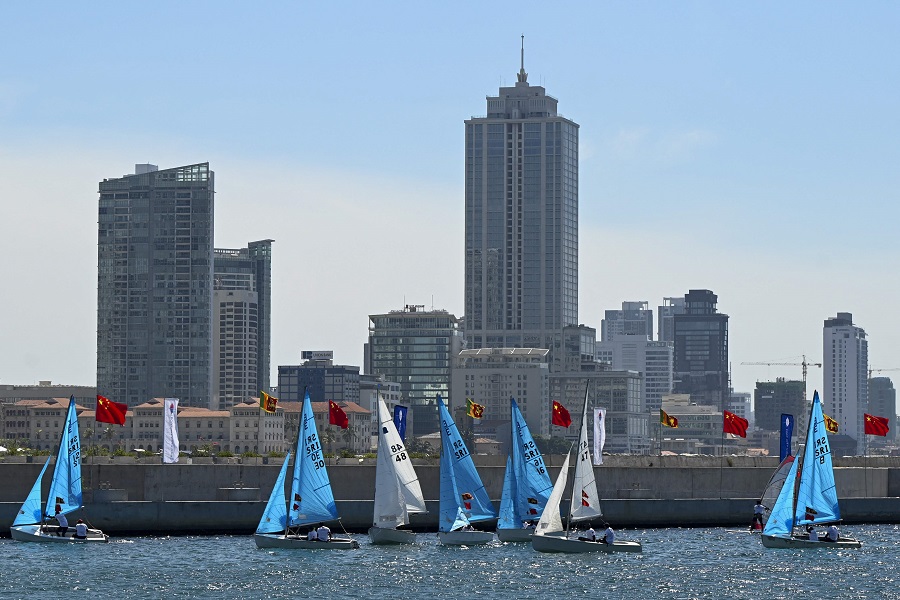 Chinese and Sri Lankan national flags flutter from poles at the Chinese-funded sea reclamation Port City project as sail boats compete in a sailing event attended by Chinese Foreign minister Wang Yi (not pictured) on the occasion of the 65th anniversary of diplomatic relations between the Sri Lanka and China at the Colombo Port city project, in Colombo, Sri Lanka, on 9 January 2022. (Ishara S. Kodikara/AFP)

Grace Chong - 30 January 2023
Amid ongoing tensions, a high-level visit by US Secretary of State Antony Blinken to China in the coming week shows hope for improved relations between the two economic powerhouses. Zaobao correspondent Yu Zeyuan notes that while the meeting may not produce practical results, it is a much needed exchange to manage and control China-US relations from worsening.
Read more
Translated by Grace Chong on 9 February 2022

In recent months, Western nations launched a series of initiatives to counter Beijing’s massive infrastructure loans. This funding competition can be a blessing and a curse for developing countries.

Since 2005, China has emerged as a major lender and provided hundreds of billions in loans and credit to developing countries across all continents. Most of China’s loans were directed at the infrastructure sector. A China Africa Research Initiative (CARI) analysis of World Bank statistics showed that as of 2018, the 72 low-income countries in the data set owed Chinese creditors US$104 billion out of a total of US$514 billion disbursed and outstanding debt.

For several years, Chinese loans were administered by the state-owned Export-Import Bank of China, Exim Bank of China. As Chinese loan operations grew and became more complex, China decided to create a bank dedicated solely to the provision of loans to foreign countries. In January 2016, China spearheaded the founding of the Asian Infrastructure Investment Bank (AIIB), in part to manage most of China’s foreign loans. While improving efficiency and deliverability of loans were important reasons for the creation of the AIIB, there were also strong strategic and political calculations behind Beijing’s decision.

For decades, the world financial system was dominated by Western institutions such as the World Bank (WB) funded mostly by the US, the International Monetary Fund (IMF) dominated by the Europeans and the Asian Development Bank (ADB) heavily influenced by Japan and other American regional allies. By founding the AIIB, China sought to counter these Western dominated institutions and have total freedom of action.

Chinese loans come with few conditions and no political demands such as respect for human rights.

The creation of the AIIB must also be seen in the context of President Xi Jinping’s Belt and Road Initiative (BRI) launched in 2013. Under the BRI, China has cooperation agreements with more than 120 countries. The aim is to connect several continents to China by developing ports, railroads, roads, airports and other infrastructure. By connecting Europe, Africa and the Middle East, Beijing aims to create a new Silk Road with China at its centre, just like in ancient times.

For decades, developing nations depended on Western institutions for financial assistance such as credit and loans. This assistance often came with strict conditions that blatantly interfered in the internal affairs of recipient countries. On numerous occasions, the WB and IMF imposed measures such as forced privatisations that led to economic disaster.

Chinese loans on the other hand come with few conditions and no political demands such as respect for human rights. As China’s loans and influence began to spread, Western nations grew resentful and fearful.

To counter China’s growing financial and resulting political influence in the developing world in the past few months, Western nations have launched a flurry of initiatives. Australia pledged in 2018 A$2 billion (US$1.42 billion) for infrastructure development in Pacific countries and Timor-Leste. In June 2021, the G7 launched the Build Back Better World (B3W), an economic initiative aimed at countering China’s BRI. In December 2021, the EU launched the Global Gateway, a plan to mobilise up to US$341 billion to develop infrastructure in low- and middle-income countries.

For decades, developing nations were neglected by Western financial institutions. Only by addressing these issues will the West be able to counter China.

While the West may have legitimate concerns over China’s growing influence in the developing world, it must understand in the first place, why countries in Africa, Latin America and Asia are turning to China for loans.

For decades, the West has imposed unrealistic conditions on impoverished nations and forced upon them one-size-fits-all economic reforms. For decades, developing nations were neglected by Western financial institutions. Only by addressing these issues will the West be able to counter China.

Moreover, many of the financial initiatives that Western nations have launched in recent months to counter China overlap with one another and are even competing. Notably, Germany, France, Italy and the UK are part of the G7; at the same time, Germany, France and Italy are part of the Global Gateway initiative. China on the other hand has a clear strategy and vision for its BRI. Rather than launching so many new initiatives, Western countries should focus on better coordinating their efforts and above all understanding the needs of the developing world.

The US is the richest country in the world, but it provides much less foreign aid in relation to the size of its economy compared to the EU, Japan, Australia and Canada.

For decades, leaders in Africa and elsewhere received lengthy sermons on democracy and transparency, but very little aid. Western institutions are notorious for pledging large amounts in aid and often falling short of such pledges. China on the other hand is in general much more reliable in keeping its promises of financial assistance. The US is the richest country in the world, but it provides much less foreign aid in relation to the size of its economy compared to the EU, Japan, Australia and Canada.

An opportunity and a curse

China’s rise has forced Western lending institutions to be more flexible and sensitive to the needs of poor countries. The rise of China is forcing the West to be more humble and treat the developing world with more respect. As such the rise of China and the competition that it is engendering with the West can be beneficial to developing nations.

The unintended consequences of competition between China and the West could be growing corruption and authoritarianism.

However, this growing competition can also have very negative effects for the developing world if its leaders do not act in the best interest of their people. The availability of Chinese funding can make elites in the developing world less keen on fighting corruption and abiding by the rule of law.

In order to compete with Chinese loans, Western institutions may become too flexible on issues such as accountability and human rights. The unintended consequences of competition between China and the West could be growing corruption and authoritarianism.

During the Cold War, in order to secure allies in the developing world, both the US and the Soviet Union provided massive financial assistance to corrupt and genocidal regimes around the world. Rather than benefiting from Soviet-American competition, many developing countries such as Angola, Guatemala, Ethiopia and Cambodia were left in ruins by the end of the Cold War.

While China and the West will have to bear some responsibility for the future of the countries that take their loans, ultimately, it is up to the leaders of the developing world to make the right choices. Neither China nor the West is forcing poor countries to take loans.

In this new Cold War, it remains to be seen if both superpowers and their clients in the developing world can avoid repeating the mistakes of the past. Today's world is much more dynamic and less rigid than during the Soviet-American confrontation and therefore may offer better prospects. History does not have to repeat itself.

In early 2016, during a conference for foreign diplomats in Beijing, the AIIB president Jin Liqun told the author that “transparency, respect for local culture and the environment will be the hallmarks of the AIIB. The AIIB will be different.” Only time will tell.

Related: Can the West's infrastructure plans rival China's BRI? | Can Biden’s new infrastructure plan rival China's BRI? | Can America beat China with Biden’s US$6 trillion stimulus plans? | While the US sets new goals for G7, China sets new goals for itself | Amid a looming debt crisis, will China press the reset button on the BRI? | No more easy money: Will BRI projects in Southeast Asia slow and stall?