06 May 2021
By Zhu Zhiqun
Political Scientist

In hindsight, Zhu Zhiqun analyses some of India’s missteps that have left it ill-prepared to handle the second wave of Covid-19. China and other countries should learn from this: it is still not time to slacken one's vigilance against Covid-19, and a friend in need is a friend indeed. 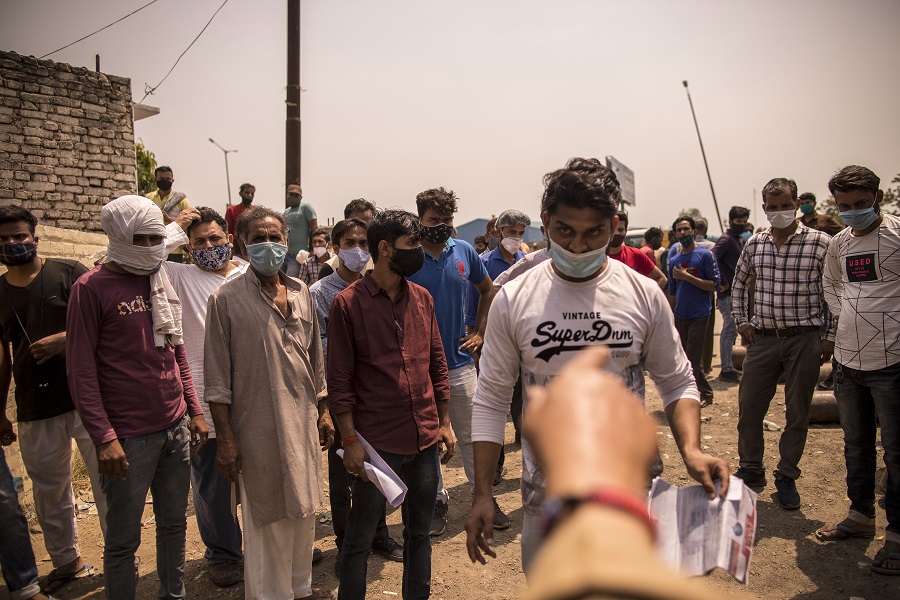 A man is called forward while waiting in line at a medical oxygen refilling facility in Moradabad, Uttar Pradesh, India on 4 May 2021. (Anindito Mukherjee/Bloomberg)

Grace Chong - 30 January 2023
Amid ongoing tensions, a high-level visit by US Secretary of State Antony Blinken to China in the coming week shows hope for improved relations between the two economic powerhouses. Zaobao correspondent Yu Zeyuan notes that while the meeting may not produce practical results, it is a much needed exchange to manage and control China-US relations from worsening.
Read more
Translated by Grace Chong on 5 May 2021

India is suffering from a horrifying second wave of the Covid-19 outbreak, setting daily records in infections and deaths. The image of open crematoriums operating around the clock is just too brutal and tragic to look at. The devastation to the Indian people has shocked the world. India is not the only Covid-19 hotspot; Turkey, Iran and Brazil are some of the other severely hit countries now. The crisis in India offers some painful lessons in the current global combat against the deadly coronavirus.

Never underrate the power of the lethal virus

The Indian government made a fatal mistake by claiming victory over Covid-19 prematurely, allowing large gatherings during the pandemic, focusing on elections, and competing with China in vaccine diplomacy without taking care of its own people first.

The Indian government declared victory against the coronavirus in 2020 in the middle of the pandemic. Many Indians thought the worst was over when cases ebbed in September. In October, Prime Minister Narendra Modi said India was saving more of its citizens’ lives compared to the resource-rich countries. In January 2021, Modi said at the World Economic Forum that it would not be advisable to judge India’s success with that of another country. In February, the ruling BJP passed a resolution declaring victory over Covid-19 and hailed Modi as a “visionary”. Before long, new cases started to surge. With infections already rising in March, India’s health minister confidently declared India was nearing the “endgame” of the pandemic.

When daily cases were in the hundreds of thousands, the BJP and other political parties were still holding massive election rallies, drawing thousands of maskless supporters. The Indian government also allowed a massive weeks-long Hindu pilgrimage Maha Kumbh to proceed with millions of attendees travelling across states to the banks of the Ganges River.

India might have done a noble thing based on the ancient Hindi concept that “the world is one family”. However, the Indian government put politics above the safety of its own citizens.

Under its Vaccine Maitri programme, India has exported over 66 million doses of Covid-19 vaccines to 93 countries as well as UN health workers and UN peacekeepers by the end of April. In comparison, China has committed to supplying 100 million doses to 65 countries in its vaccine diplomacy, but only after the coronavirus was largely under control at home and vaccination of its own populace gained momentum.

Through Vaccine Maitri, India has been projecting itself as a responsible and selfless power. India might have done a noble thing based on the ancient Hindi concept that “the world is one family”. However, the Indian government put politics above the safety of its own citizens. No government should be blamed for vaccinating its own people first, as most countries have done. India apparently punched above its weight, and the Indian government and many Indians did not take Covid-19 seriously, leading to the current crisis.

Combating Covid-19 and its variants will be a long-term effort. Even relatively successful countries such as Israel, Vietnam and China should not relax their vigilance against the virus.

There is a severe shortage of oxygen, beds, ventilators, ambulances and other medical equipment in India. Empathy and humanity are needed in such a crisis and global assistance should be offered to India without conditions, yet politics often gets in the way.

Milind Deora, a former Indian minister of state, criticised the US’s initial reluctance to help India as “undermining the strategic Indo-US partnership”. With much delay, the US finally started to deliver aid to India at the end of April 2021. The US government will deliver more than US$100 million worth of supplies to India, according to the White House. Washington also lifted its ban on the export of raw materials for Covid-19 vaccines — after sharp criticism that it had snubbed India’s appeal to make the materials available.

As the crisis quickly spiralled out of control in India, Chinese leaders have pledged to help. President Xi Jinping sent a message to Prime Minister Modi on 30 April offering support. Xi’s message, the first such communication between the two leaders following the 2020 border crisis, was followed by a telephone call from China’s Foreign Minister Wang Yi to his Indian counterpart S. Jaishankar, expressing China’s solidarity with India.

Since mid-2020, India-China relations have deteriorated rapidly due to tensions along a shared border in the Himalayas. In June, the two militaries had their deadliest border clash in more than four decades, with at least 20 casualties on the Indian side and four on the Chinese side during the brawl.

As a result, the Indian government has been lukewarm towards China’s offers. Indian companies, on the other hand, have struck their own deals with Chinese firms to import oxygen tanks and personal protective equipment. According to the Chinese ambassador to India Sun Weidong, Chinese medical suppliers have been working overtime on at least 25,000 orders from India for oxygen concentrators.

It’s disappointing that deep-seated distrust is hampering potential cooperation between the two neighbours.

China planned to establish a Covid-19 “emergency supplies reserve” for South Asian countries, including India, Afghanistan, Pakistan, Nepal, Sri Lanka and Bangladesh. India was invited to attend the online meeting in late April, but it did not join.

Some Indians remain suspicious of China’s motives. Former Indian foreign secretary Kanwal Sibal said in an article in the South China Morning Post, “There’s always a hidden agenda behind Beijing’s outreach in such matters. China wants to signal to India that America [which initially refused help to India] is not a reliable partner and drive a wedge between Delhi and Washington who share a good relationship.” It’s disappointing that deep-seated distrust is hampering potential cooperation between the two neighbours.

A social media account linked to the Chinese Communist Party’s Central Political and Legal Affairs Commission put up a post with the caption: “Lighting a fire in China VS lighting a fire in India.” The post showed two images side by side of a rocket launch in China and a cremation ground in India. The callous message was quickly deleted after being condemned by Chinese netizens. It is unfortunate that some people lack empathy and sensitivity.

It ain't over 'til it's over

During the Quad summit in early March 2021, the group’s four members — the US, India, Japan and Australia — pledged to work jointly to fight the pandemic. India offered to produce one billion Covid-19 vaccines; the US would offer technology for it; Japan was to provide finance and Australia was to provide the delivery infrastructure. Given this backdrop, the Biden administration’s initial failure to swiftly lend a helping hand to India for vaccine production came across as doublespeak and severely dented its credibility as a global leader.

As India continues to suffer from the outbreak, its neighbours including Nepal, Pakistan, Bangladesh, and Sri Lanka are also witnessing a surge in new cases and deaths. If not put under control, the new variants of the coronavirus will find their way into other parts of Asia and around the world.

Top US infectious disease expert Anthony Fauci said that the world has failed so far in tackling the global nature of the pandemic with a suitably global response, leading to tragedies like the current outbreak in India. “The only way that you’re going to adequately respond to a global pandemic is by having a global response, and a global response means equity throughout the world,” said Fauci to the Guardian Australia.

As India continues to suffer from the outbreak, its neighbours including Nepal, Pakistan, Bangladesh, and Sri Lanka are also witnessing a surge in new cases and deaths. If not put under control, the new variants of the coronavirus will find their way into other parts of Asia and around the world. The international community must take joint actions immediately to help India and other developing countries that are suffering now. As the saying goes, “it ain’t over ‘til it’s over".

In face of natural disasters and global pandemics, human beings are often powerless and helpless, and people in the developing world are especially vulnerable. Developed countries have been criticised for vaccine stockpiling. It’s encouraging that as domestic cases have flattened and as over half of its adult population have received at least one dose of vaccines by early May 2021, the US has begun operations to help other nations.

A friend in need is a friend indeed. Politics should not stand in the way. India was one of the first nations to send medical supplies to the Chinese city of Wuhan after the initial coronavirus outbreak there in late 2019. It is natural that China would like to repay India’s kindness and help now. It may be a cliché to say that every cloud has a silver lining, but there is no reason why India and China cannot support each other in their combat against Covid-19 while improving their strained relationship in the process.