Cultural historian Cheng Pei-kai reminisces about the delectable freshwater shrimps he savoured in Hangzhou, recalling that Jiangnan cuisine is very much poetry on a plate. 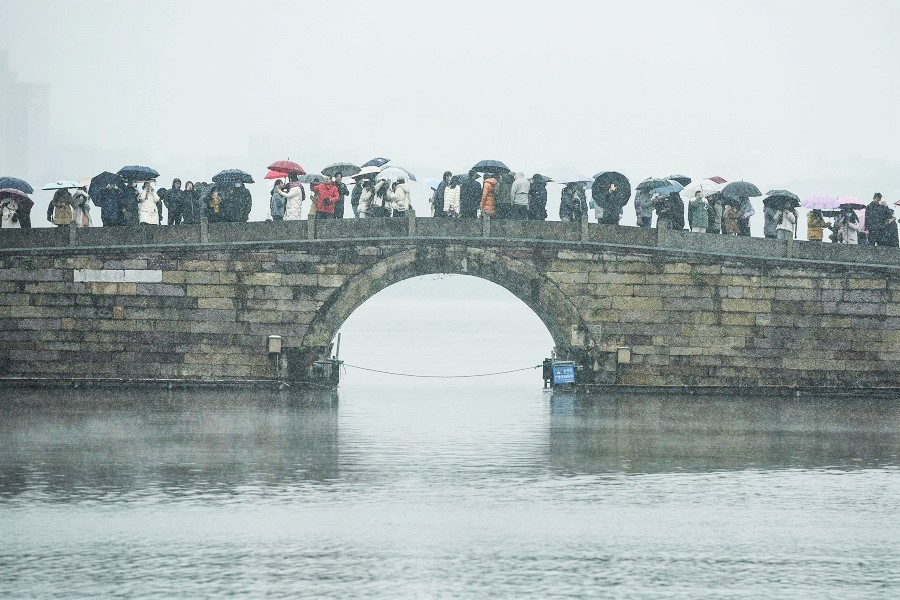 One chilly autumn morning in Hangzhou, I set out for a walk with my jacket on, enjoying what’s left of the cool weather from the night before. Taking a stroll on wide empty streets before they get engulfed by people and traffic is pretty enjoyable.

Since discovering a certain noodle stall at Wulin Square, we've made it a point to get up at daybreak whenever we're in Hangzhou, leaving the house at dawn just to stroll down to the stall for a bowl of piping hot Pian Er Chuan (noodle soup served with preserved vegetables, sliced pork, and bamboo shoots).

The stall’s rendition of this dish is really special. Because of the spot-on heat control, the texture of the noodle is neither too soft nor too hard, with a mouthfeel that is refreshing and springy. The pork slices are also tender and full of wok hei (镬气, huoqi, pronounced “wok hei” in Cantonese, lit. breath of the wok).

It never fails to amaze me how a duel between the stove and frying pan results in masterful pork slices that are not tough at all, giving me a new understanding of what “melts in the mouth” means. But it is the exceptional flavour of the broth that keeps us coming back.

Pian Er Chuan broth generally consists of meat slices, sliced bamboo shoots and pickled mustard greens which have been stir-fried at high heat with some stock, giving one a sense of the bold and daring flavours of Jiangnan. It probably exudes the character of Lin'an prefecture during the Song dynasty, as described in this excerpt from Dongjing Meng Hua Lu (《东京梦华录》, The Eastern Capital: A Dream of Splendour): "Overlapping green hills and magnificent buildings, never-ending songs and ceaseless dancing on West Lake. All are intoxicated by the balmy days and are revelling as if in bygone Bianzhou..."

The Pian Er Chuan at this noodle stall is made tastier and infused with even greater flavours of Jiangnan because of the handful of tiny unshelled freshwater shrimps added. The little shrimps not only enhance the taste of the dish but conjure up poetic nuances of West Lake’s mist and rain.

... the experience is more like a knackered sedan chair carrier thirstily downing a big bowl of tea with his sleeves rolled up after walking ten miles up a mountain.

I enjoy eating freshwater shrimps because the meat is especially tender, delicate and fresh. It needs to be slowly savoured as if sipping a cup of Ming Qian Dragon Well (明前龙井) tea — nestled within its delicate sweetness is the fog of the hills and rivers, and the leisurely poise of Jiangnan.

In contrast, even though the prawn balls served in Hong Kong are as large as golf balls, chewy and a real treat to tuck into, the experience is more like a knackered sedan chair carrier thirstily downing a big bowl of tea with his sleeves rolled up after walking ten miles up a mountain. It is really hard to imagine a poetic scene because it has nothing to do with the graceful beauty of nature and so there’s nothing elegant about it either.

Many years ago, I shared a meal with a friend by the West Lake. A plate of refreshing freshwater shrimps in lightly salted stock was served. It seemed as if curls of endless fun were dancing on the white porcelain plate garnished with julienned scallions and ginger. With the pinkish-red shrimps in the foreground, the picture looked almost like an elegant and classic court painting from the Song dynasty.

... couldn't help thinking that this was the epitome of sophisticated Jiangnan cuisine, and that it inhabited a realm that even the most expensive sea cucumber and abalone could not reach.

We sat at a table by the window and watched floating clouds in the distance as they cast a faint shadow on the lake. A gentle breeze caressed the drooping willows by the lake shore, and even carried the faint fragrance of the sweet osmanthus to our noses. I couldn’t help thinking that this was the epitome of sophisticated Jiangnan cuisine, and that it inhabited a realm that even the most expensive sea cucumber and abalone could not reach.

Late Tang dynasty poet Tang Yanqian (唐彦谦) once wrote the poem Suo Xia (《索蝦》, lit. a request for shrimps). Tang was from Shanxi’s Jinyang (now Taiyuan) and mainly moved around the northwestern, northern and central regions. He was very envious of the cuisine found in Dangtu, a county near the lower part of the Yangtze River, and especially loved freshwater shrimps from Huyang. Having tried them, he couldn’t forget the magnificent taste and so wrote this poem asking his friends in Jiangnan for some freshwater shrimps to satisfy his craving.

The placename Gushu (姑孰) in the poem is today’s Dangtu, Ma’anshan, and the region of Huyang is famous for its freshwater shrimps. He described the appearance of these shrimps as follows: they have a pair of pincers, many little hairy feet, and a long thorn on the head. Once placed in a pot, they curl up as if bowing to a king, and turn red like an ancient Chinese official in a red robe.

Jiangnan’s freshwater shrimps are available throughout the four seasons, but are at their best in autumn. What an unforgettable taste which leaves me wanting more.

While there are plenty of juicy saltwater prawns for me to eat back in Hong Kong, I am always thinking about the delicious freshwater shrimps I had in Jiangnan.

This article was first published in Chinese on United Daily News as “江南风味” in 2018.

Related: Cultural historian: Fish as large as submarines in Hangzhou? | A bowl of Suzhou noodles named by Emperor Qianlong | My longing for the elusive fish of spring | What does Zhuangzi have to do with goldfish in a Suzhou winter pond? | Cultural historian Cheng Pei-kai: The ancients loved a good bowl of swamp eel noodle soup | Art and history in a bowl of Suzhou noodles | Autumn musings by the West Lake