In the second of a six-part series on hiking in Hong Kong, cultural historian Cheng Pei-kai shares the wonders of Hong Kong’s hiking trails. Even in the foggiest of weathers, with a little imagination, the beauty of Hong Kong’s mountains and seas are a sight to behold. 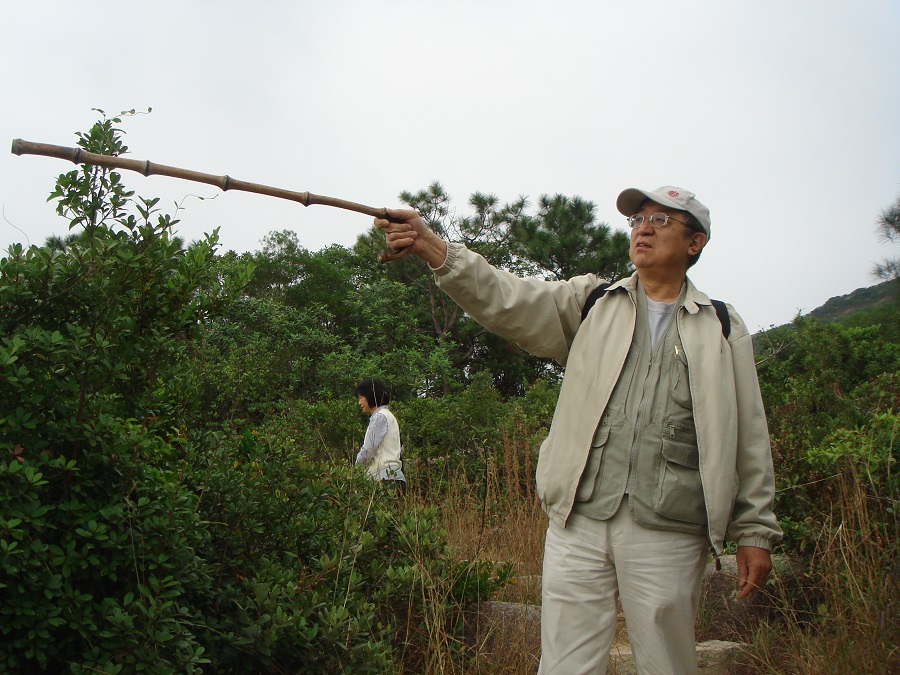 The author on one of his hiking trips to the Dragon's Back, a mountain ridge in Hong Kong. (Photo provided by Cheng Pei-kai)

Grace Chong - 30 January 2023
In the last of a six-part series on hiking in Hong Kong, cultural historian Cheng Pei-kai shares the wonders of Hong Kong’s hiking trails. As he rediscovers the hidden splendour of Ma On Shan on a difficult hike, he marvels at the ingenuity of the gods, keeping the pristine away from the evil world. Only the most determined will glimpse unparalleled beauty.
Read more
Translated by Grace Chong on 20 December 2022

Everything was a blur as a thick fog clouded our vision like frosted glass in the bathroom, shrouding the alluring headlands around us. Anything beyond ten metres, even faces were a blur. The weather forecast said that it would be foggy, but who knew it would be this foggy and even drizzly by the time we reached Sai Kung Country Park?

Looking out from Wong Shek Pier, the earth looked as if it was dressed in white, while the skies and the seas muddled together into one shade and the fog seemed gloomy and ill at ease. My friends asked, “Will it pour?”

Although we couldn’t see what was ahead of us, we decided to go ahead with our hike. Boarding the speedboat, we dashed through the fog and rain like a sharp blade slicing through an ink wash painting. The speedboat went way faster than we could’ve imagined, and we felt like we were on a space shuttle instead, ready to launch into boundless outer space at any minute.

The wind and the rain were like arrows coming at us from all directions, ruthlessly hitting our faces and heads. Then, a gigantic wave came and our speedboat suddenly lifted off the waters and landed with a huge thud. Through it all, the boat never dropped speed.

Strangely, I was instead reminded of Chinese poet Jiang Kui’s poem about lotus ponds, beautiful skies, and alluring lotus flowers swaying in the gentle breeze.

Flying through the wind

Travelling with us was Chinese historian Rong Xinjiang, an expert in Dunhuang and the Silk Road. While he often journeyed through vast deserts and explored the limits of life in the loneliness of an endless desert, he actually grew up near the Bohai Sea. So this trip made him feel like he had returned to the embrace of the sea.

Huge waves enveloped us like towering walls, but our speedboat boldly charged forward like a soldier taking on a ferocious enemy. Unable to contain his excitement, Rong loudly exclaimed that it has been a long time since he felt this liberated. His exuberance even exceeded that of Chinese poet Tao Yuanming when the latter proclaimed his joy in a poem about returning to the mountains after being trapped in officialdom.

Strangely, I was instead reminded of Chinese poet Jiang Kui’s poem about lotus ponds, beautiful skies, and alluring lotus flowers swaying in the gentle breeze. Given the situation I was in — tossed around by the waves, and bracing gusty winds and relentless rain — how was I even reminded of fine weather and blooming lotuses? It felt as if I was comparing apples and oranges, but yet it was also uncannily appropriate — perhaps because the wind was howling and water droplets were all over my face.

All we saw was dense fog and flickering human shadows, like a low-quality shadow play.

A green mass suddenly peeked through the fog — we had arrived at Grass Island (Tap Mun). But the rain was not on our side and it got heavier. Some of my friends began to have second thoughts, “Can we still hike?” I replied, “Let’s worship Mazu at Tin Hau Temple first. And then we can decide.”

An inscription at the top of the temple gates to the Tin Hau Temple at Grass Island read: “Built in the first year of the Jiaqing Emperor’s reign.” This meant that the temple has stood here for 213* years. I guess Mazu must have settled down on the island much earlier, during the reign of the Qianlong Emperor. We walked around the temple and said our prayers. Soon the rain stopped and it was foggy again. “Let’s go,” I said.

Islands in the far distance surfaced like whales taking a breath at the water’s surface.

Beating the mist and fog

Following a small trail, we hiked to a pavilion (望海亭) where we could see the sea on the northern side of the island. But we couldn’t even see the coast beneath the hill, let alone the sea. All we saw was dense fog and flickering human shadows, like a low-quality shadow play.

I told my friends that we could actually catch a glimpse of the South China Sea from here, and even the Pacific Ocean further away in the distance. My friends laughed, “Yes, we see it, we see it. We can even see Hawaii and the Golden Coast of California!”

Walking further down the coast, the meandering trail brought us to the stacked stones area. As we walked through the fog, the horizon in the distance suddenly lit up. A white streak peeked through the grey skies and gradually widened. Suddenly, the wind blew and the sky was blue again. Islands in the far distance surfaced like whales taking a breath at the water’s surface.

Clouds quickly formed, playing a game of chase with the fog, dashing through the sky and leaping from the surface of the sea to the hills. They drove away what was left of the fog and formed a wispy veil around the peak of the mountain before vanishing into thin air with a dainty little dance.

... perhaps Mazu’s guardian general Qianliyan (千里眼, eyes that can see a thousand miles) at the Tin Hau Temple could see California, but definitely not us.

We stood on the shore, watching the seas and skies turn into theatre, unintentionally performing a chaotic cloud flight. The fog receded and the sea’s greyish-blue surface extended towards the end of our vision. The little islands in the far distance were a pale green. Set against the sky that turned from grey to blue, they gradually became more vivid. I exclaimed, “Look! This is the Pacific Ocean. Look further ahead, add a bit of imagination, and you can see California!”

My friends laughed, saying that perhaps Mazu’s guardian general Qianliyan (千里眼, eyes that can see a thousand miles) at the Tin Hau Temple could see California, but definitely not us. But, the sea view at Grass Island is indeed magnificent.