Leaders on both sides of the Taiwan Strait made declaratory statements over the last weekend, the anniversary of the Xinhai Revolution and what the Taiwanese celebrate as Double Tenth Day or their national day. Taiwan President Tsai Ing-wen’s comments were provocative, yet managed to stay within the bounds of ambiguity. But the Taiwanese military did forecast that mainland China will be able to launch an attack on Taiwan by 2025 to 2027. Will brazen remarks stoke the flames? 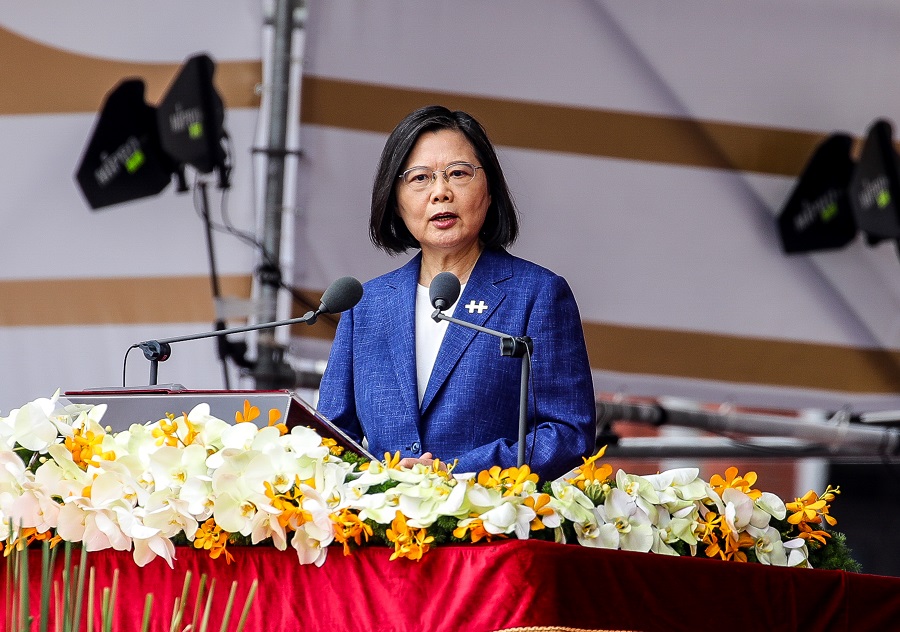 Grace Chong - 5 December 2022
Through the eyes of her cat Pudding, Beijinger Lorna Wei gives a snapshot of her daily life when her residential building went under lockdown last week.
Read more
Translated by Grace Chong on 15 October 2021

Last weekend, both sides of the Taiwan Strait separately commemorated the 110th anniversary of the Xinhai Revolution, a revolution that rewrote the history of modern China.

While both mainland China and Taiwan’s top leaders made speeches and there was some verbal sparring, ramifications from the occasion have continued to unfold in Taiwan whereas the mainland side has been surprisingly peaceful and quiet.

In his speech, mainland Chinese President Xi Jinping made a somewhat “anticlimactic” statement on the smouldering Taiwan Strait issue, calling for national reunification by peaceful means, saying that this “best serves the interests of the Chinese nation as a whole, including compatriots in Taiwan”. But Xi’s placatory speech was bluntly countered by the leader from the other side of the Taiwan Strait.

In her “Double Tenth Day” (also the National Day of the Republic of China) speech, Taiwan President Tsai Ing-wen asserted, “Free and democratic countries around the world have been alerted to the expansion of authoritarianism, with Taiwan standing on democracy’s first line of defence.” She attacked Beijing authorities for “taking complete control” of Hong Kong and “suppressing” democracy activists, and maintained that “nobody can force Taiwan to take the path China has laid out for us” because that path “offers neither a free and democratic way of life for Taiwan, nor sovereignty for our 23 million people”. She even declared that “the Republic of China [ROC] and the People’s Republic of China [PRC] should not be subordinate to each other”.

But to the KMT’s chagrin, with seemingly little effort, Tsai has grafted the ROC onto the Democratic Progressive Party’s concept of Taiwan independence.

A phrase with different meanings

Her speech invited criticisms from the mainland, and also shocked Taiwan’s pan-Blue camp.

Both former Taiwan President Ma Ying-jeou and current Kuomintang (KMT) chairman Eric Chu Li-luan criticised Tsai’s “subordination” comment as “unconstitutional”. The pan-Blue camp was especially infuriated with her flying the ROC flag high, and accused her for constantly downplaying the ROC but conveniently using it as a tool when necessary.

The ROC was originally an asset of the KMT and was derided by Taiwan independence activists (hoping to declare a Republic of Taiwan) as a “foreign power”. But to the KMT’s chagrin, with seemingly little effort, Tsai has grafted the ROC onto the Democratic Progressive Party’s concept of Taiwan independence.

The KMT also criticised Tsai’s declaration of mutual non-subordination as eliminating the cloak of ambiguity on cross-strait relations and effectively closing the door for cross-strait peace. Over in Beijing, officials from the State Council’s Taiwan Affairs Office (TAO) denounced her remark as a “blatant touting of the false ‘two states’ theory”.

In the face of controversy, Hsiao Bi-khim, Tsai’s close aide and Taiwan’s representative to the US, lightly explained that Tsai’s “subordination” comment was based on “truth and reality”.

Did Tsai’s comment overstep into the territory of the “two states” theory? As compared with former Taiwan President Lee Teng-hui’s proposal of “special state-to-state relations” (that is, the “two states” theory) in 1999, some academics pointed out that Tsai only said that both sides of the Taiwan Strait “should not be subordinate to each other”, and there was no characterisation or definition of cross-strait relations per se. To the Taiwanese people, being not subordinated to each other certainly reflects the current situation. Thus, it should be said that Tsai is indeed an expert in cross-strait relations, having made a provocative remark delicately and in a precise and calculated manner.

For days, Tsai’s “big move” was heatedly discussed by academics in Taiwan, and some people speculated with bated breath: Did the US know beforehand? Would the US and China escalate the situation like in 1999, to regulate and deter Taiwan? Would Beijing deploy fighter planes to the airspace above the Taiwan Strait?

Calm before the storm?

Intriguingly, so far there has been little movement between China and the US. Apart from the usual criticism by the TAO, there has been no higher-level action by mainland China. However, some in Taiwan remain worried that this is the calm before the storm.

Since “peaceful reunification” has again been confirmed to be in the best overall interest of the Chinese people, Beijing will not be easily provoked, and does not have to look like it is dancing to Taiwan’s tune.

From a wider perspective, this is in fact within expectations. Since “peaceful reunification” has again been confirmed to be in the best overall interest of the Chinese people, Beijing will not be easily provoked, and does not have to look like it is dancing to Taiwan’s tune. While calls for “military reunification” swell among the people, Beijing knows that it is in control of the cross-strait issue.

We have to see what China’s biggest political issues are. Before last year, it was building a moderately affluent society. Now, China is trying to gain a growth window of another 15 years, to build a modern socialist society by 2035, which is also the objective spelled out in the report of the 19th National Congress of the Chinese Communist Party (CCP) in 2017.

Since China’s reform and opening up, the CCP leaders have worked towards modernisation. Going by Deng Xiaoping’s Three-Step Development Strategy (三步走), China wants to achieve basic modernisation by the mid-21st century, during the PRC’s 100th anniversary. The CCP has brought forward this timeline by 15 years in the Xi Jinping era, which will be an important political legacy for Xi. The year 2035 is a reference for all of mainland China’s main policies - if there was a choice, Beijing would not want to interrupt economic development and national growth.

As a leader, she has a responsibility to work for the best interests of the people of Taiwan, and in terms of strength, history, and constitutional and legal tradition, it is reasonable that Taiwan’s “going rate” is higher than Hong Kong’s.

Besides, time is on the side of mainland China. The Taiwanese military and military experts forecast that mainland China will be able to launch an attack on Taiwan by 2025 to 2027. And the later it gets, the lower the cost of military reunification for Beijing. The biggest risk currently is that it may instead be provoked into moving prematurely. This is like someone holding a good stock knowing that its value will go up several times in ten years; so why sell it now?

Taiwan’s leaders are certainly aware of the divergence in cross-strait military strength and the fact that the Taiwan Strait is currently safe. Hence, the comments by Tsai — without the pressure of re-election — are treading on the line while subtly posturing to negotiate with mainland China as the ROC. It is also strongly squeezing the political space of the KMT in Taiwan, killing multiple birds with one stone. As a leader, she has a responsibility to work for the best interests of the people of Taiwan, and in terms of strength, history, and constitutional and legal tradition, it is reasonable that Taiwan’s “going rate” is higher than Hong Kong’s.

When one side is clearly stronger and more dominant than the other, and the winner is known even before a fight happens, then the fight will not happen. Bloodless reunification such as in Beiping's “peaceful liberation” — in the way Nationalist general Fu Tso‐yi surrendered Peking to the Communists in January, 1949 —  would be best for Beijing. However, would the US just watch and wait for the day when Beijing becomes strong enough for peaceful reunification? There has been no cross-strait war in the past few years, but who knows how long that will last? Indeed, the period around 2027 will be a sensitive time.