What can China and the US cooperate on now?

US academic Zhu Zhiqun says that the future should not be decided solely by self-interested politicians in Washington or Beijing. Instead, real problems that affect or endanger ordinary people's lives should be of the highest priority. A failure to cooperate can lead to confrontation between the two most consequential nations of today and bring harm to the world. 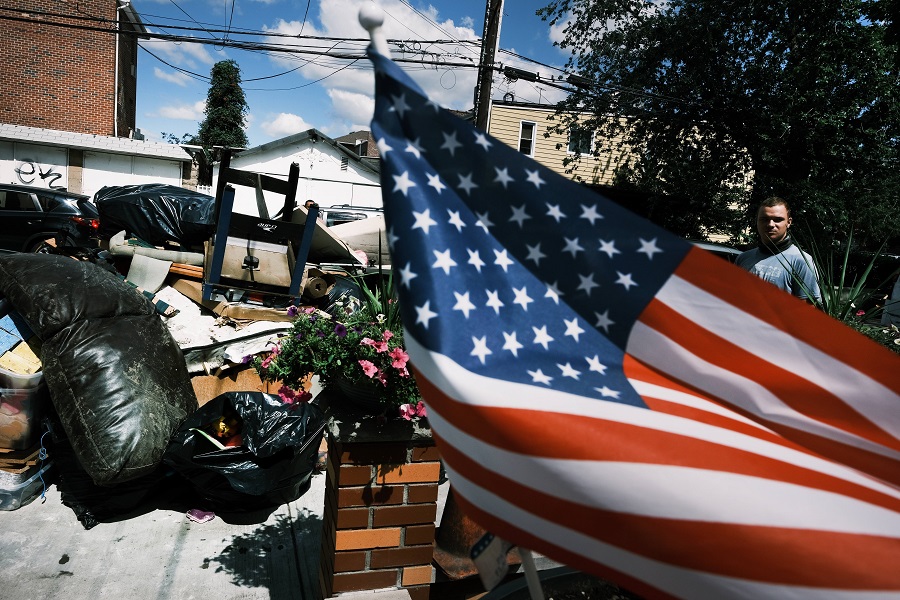 People clean up their flooded homes in a Queens neighborhood that saw massive flooding and numerous deaths following a night of heavy wind and rain from the remnants of Hurricane Ida on 3 September 2021 in New York City, US. (Spencer Platt/Getty Images/AFP)

Grace Chong - 30 January 2023
Amid ongoing tensions, a high-level visit by US Secretary of State Antony Blinken to China in the coming week shows hope for improved relations between the two economic powerhouses. Zaobao correspondent Yu Zeyuan notes that while the meeting may not produce practical results, it is a much needed exchange to manage and control China-US relations from worsening.
Read more
Translated by Grace Chong on 7 September 2021

“The world is changing. We are engaged in a serious competition with China,” remarked President Joe Biden following the withdrawal of US troops from Afghanistan. He was suggesting that ending the almost 20-year long war in Afghanistan could help the US to focus on its major challenges such as China and Russia.

Biden’s 31 August speech was a sober call for ending the era of endless wars for America. Unfortunately, he continues to embrace assertions promoted by the military-industrial complex that China and Russia are America’s major threat. Today the near-unanimous consensus inside the Beltway in Washington and even among media and the scholarly community in the US is that China poses a dire threat to American national interests, and therefore the US must counter China economically, technologically, politically, militarily, and diplomatically.

It is naïve to expect a drastic improvement of US-China relations in the near future given the intensity of competition and the growing negative public views of each other. Hawks in Washington and Beijing will continue to take advantage of the frosty relationship for political gains while fanning nationalism on both sides.

Other countries expect the two great powers to engage in a healthy competition and resolve their differences peacefully.

Animosity despite interdependence an anomaly

A problematic US-China relationship seems to be the “new normal” now, but it is absolutely abnormal. The US and China are the two most consequential nations in today’s world. It is hard to decouple them from each other since they are joined at the hip in many dimensions in this interdependent world. Other countries expect the two great powers to engage in a healthy competition and resolve their differences peacefully. Almost no other nation wants to choose sides between China and the US, as US Vice President Kamala Harris’s recent Asia trip demonstrated.

The US and China are unlikely to reach agreement on thorny issues such as Taiwan, the South China Sea, Hong Kong, and Xinjiang, and the Chinese government considers the US involvement in these areas as interference in China’s internal affairs, something that a powerful China will increasingly not tolerate any more. In the short term, the two nations will have to live with such differences and disputes. Meanwhile, the two sides must seek areas where they can and must cooperate. Cooperation will not only help solve the common problems they face but also hit the brakes as the two powers head toward confrontation.

What constitutes “clear and present dangers” to Americans and Chinese should not be decided solely by self-interested politicians in Washington or Beijing. Ordinary people care about their safety and wellness the most. Three areas stand out that require immediate cooperation between the US and China: climate change, the pandemic and North Korea.

Natural disasters spurred by climate change are the leading threat to humanity. From earthquakes to hurricanes, from flooding to heat waves, planet Earth is becoming a less habitable place for living things. Climate change is undoubtedly the greatest global challenge of our time.

In the US, Hurricanes Henri and Ida struck much of the south and east within weeks, claiming dozens of lives and causing excessive flooding and tremendous property damages, and the wildfires in the west seem unquenchable. In China, devastating floods in July 2021 cost more than 300 lives in Henan province alone. Sandstorms are common in China’s north and northwest. On 25 July, a sandstorm over 100 metres high swallowed part of northwestern China including the ancient city of Dunhuang. These are just some of the most recent examples of natural disasters hitting the US and China. The inclement weather has become more frequent and extreme now.

As the two largest emitters of CO2, the US and China must take action and work together to tackle climate change without delay. It’s encouraging that President Biden’s special envoy for climate John Kerry has visited China twice within five months to discuss with Chinese officials on cutting emissions. The government and the public on both sides should support such efforts.

The Covid-19 pandemic has plagued the world for nearly two years now. The Delta variant wiped out much progress that has been achieved so far to contain the virus, sending parts of the world back to square one. And more variants of the virus are emerging. As of early September 2021, Covid-19 has claimed over 665,000 American lives. Through draconian measures in testing, tracing, and vaccinating, China has fared better than most countries, with under 5000 deaths being officially reported. Yet, the pandemic’s social and economic cost is hard to measure now.

The US and China have the responsibility to provide all relevant information and participate in the multilateral and thorough probe into the origins of the virus.

President Biden instructed the US intelligence community to produce a report about the origins of the Covid-19 virus within 90 days. The intelligence report issued at the end of August 2021 failed to reach any firm conclusion on whether the coronavirus first found its way from an infected animal to humans or it somehow escaped from a lab. China has opposed such unilateral investigations. During his phone call on 29 August 2021 with Chinese Foreign Minister Wang Yi, US Secretary of State Antony Blinken suggested that the US does not intend to blame any country when seeking the origins of the Covid-19 virus.

The US and China have the responsibility to provide all relevant information and participate in the multilateral and thorough probe into the origins of the virus. The two countries, especially the science communities, must work together to jointly develop the next generation of vaccines, establish the global surveillance network for new viruses and variants, and improve the global vaccine manufacturing and distribution system. Such cooperation is urgently needed and will greatly enhance global public health.

When the final groups of US troops were flown out of Afghanistan, the headlines around the world and President Biden himself declared that “the longest war in American history” was over. However, America’s real longest war — the Korean War — is still ongoing.

It’s high time that the US, China and others worked together to end America’s real longest war and secure peace in Northeast Asia.

The Korean War broke out on 25 June 1950 and after three years of fighting, delegates from the two belligerent sides signed an armistice in Panmunjom on 27 July 1953, starting the ceasefire on the Korean peninsula. There has never been a peace treaty to officially end this deadliest military conflict after World War II.  Approximately three million people died during those three years, the majority of whom were civilians. The Korean peninsula remains divided and hostility still exists between North Korea and the US. The US maintains 28,500 troops in South Korea today. North Korea’s nuclear programme has added danger to the situation on the peninsula.

President Biden’s special envoy for North Korea Sung Kim has visited South Korea twice so far, trying to break the impasse in denuclearisation talks with the North. Kim spoke on the phone with his Chinese counterpart Liu Xiaoming on 6 July after his first trip, and he met with Russian Deputy Foreign Minister Igor Morgulov on 24 August during his second trip. Clearly, international cooperation is needed to address the North Korea challenge. Given its enormous economic and diplomatic influence over North Korea, China’s cooperation is vital. It’s high time that the US, China and others worked together to end America’s real longest war and secure peace in Northeast Asia.

Political leaders, the media and the public in the US and China must all be educated about the “clear and present dangers” both nations face. For both countries, the biggest external threats include climate change, the ongoing pandemic, and North Korea’s nuclear programme. The current political atmosphere between China and the US is not conducive to bilateral cooperation, but these are the three areas that require immediate and unconditional action. To prevent the US-China relationship from further deterioration and to focus on the real external dangers, the US and China must work together to address these common challenges despite their intense competition and sharp differences in other areas.

Related: China-US competition: Why small countries will not choose sides | Tianjin meeting: China-US relations enter 'break-in period' | Will the US’s ‘integrated deterrence’ keep China in check? | Extreme weather could become the norm, but Chinese cities are not ready for it | Net-zero CO2 emissions before 2060: Is China's climate goal too ambitious? | The world may never know the origins of the Covid-19 pandemic