The US would not like to see China and Russia getting too close, knowing that their combined strengths would be formidable. But history shows that full cooperation between China and Russia is not a straightforward matter at all. US academic Han Dongping discusses the forces pushing these two giants closer together and the possible scenarios that could unfold if they join forces. 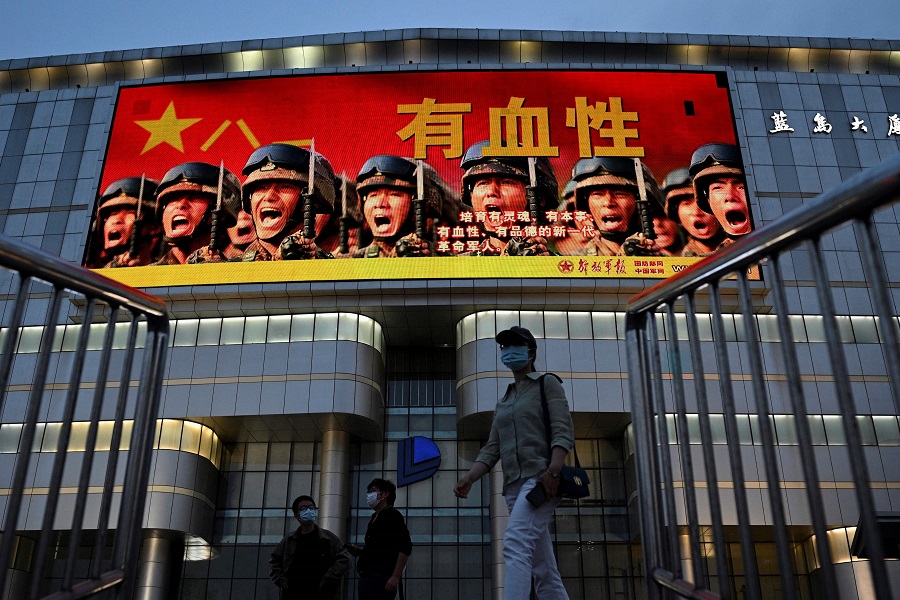 People walk along a street in Beijing on 18 May 2021 past military propaganda which reads: "Courageous — raise a new generation of spirited, capable, courageous and morally upright revolutionary soldiers." (Noel Celis/AFP)

Grace Chong - 30 January 2023
Amid ongoing tensions, a high-level visit by US Secretary of State Antony Blinken to China in the coming week shows hope for improved relations between the two economic powerhouses. Zaobao correspondent Yu Zeyuan notes that while the meeting may not produce practical results, it is a much needed exchange to manage and control China-US relations from worsening.
Read more
Translated by Grace Chong on 27 July 2021

Those who exaggerate the strategic contradictions, conflicts of interest and historical grievances of China and Russia mostly have US affiliations because the Americans are the ones most worried about China and Russia becoming an invincible duo.

If Russia’s advantages in the military, space, and natural resources realms are combined with China’s all-round industrial and demographic advantages, the current global geopolitical situation and indeed the world will be very much changed.

Looking back in history, China and Russia have joined forces four times. The first occasion was when the Manchus signed a secret military alliance treaty with Russia against Japan after the First Sino-Japanese War. But this treaty was broken by the Manchu rulers of the Qing dynasty when China chose to stay neutral in the Russo-Japanese War of 1905 which took place on Chinese soil. At the same time, many Chinese were recruited by the Japanese to work as their spies. This was how the first alliance between China and Russia ended.

In January 1923, Chinese revolutionary leader Sun Yat-sen and Soviet representative Adolf Abramovich Joffe issued a joint statement which became the basis for cooperation between both sides. The Soviet Union helped Sun restructure the Kuomintang (KMT), while the latter proposed the “three great policies” of alliance with the Soviet Union, cooperation with the Communist Party, and assistance to the workers and peasants.

The Soviet Union sent military advisers to China, provided military aid, and helped the KMT set up the Whampoa Military Academy. They helped train the National Revolutionary Army, and assisted the KMT in organising and directing the Northern Expedition (against regional warlords) to unify China. It can even be said that if not for the sincere help from the Soviet Union, there would be no KMT and Chinese Communist Party (CCP); there would also be no Whampoa Military Academy or the Northern Expedition that led to China’s unification in name.

But midway through the Northern Expedition, Chiang Kai-shek went against the Soviet Union, broke conclusively with the communists and set the KMT on a long-term struggle with the CCP. He drove out the Soviet advisers, and put Mikhail Borodin — the man who had supported him — on the wanted list. He organised a massacre of communists and leftists in the KMT, in effect snuffing out the Northern Expedition. The history textbooks of the CCP mentions Chiang’s betrayal of Sun and the CCP but makes no mention of the fact that Chiang had first gone against the Soviet Union.

From the Mukden incident of 1931 to the Marco Polo Bridge incident of 1937, Japan became a rising threat to China and Russia. Prior to the Marco Polo Bridge incident, Chiang had wanted to join the Four-Power Treaty signed between the US, the UK, France and Japan in December 1921 to peacefully resolve the conflict with Japan. Following the Marco Polo Bridge incident, Chiang realised that there was no hope of compromising with Japan. It was only at that point that he signed the Sino-Soviet Non-Aggression Pact with the Soviet Union in exchange for military aid. This was the third time that China and Russia joined forces. The Soviet Union sent its air force to support China during the Second Sino-Japanese War, and a large number of Soviet pilots died in the battle. At the same time, the Soviet Union also provided a lot of military assistance to Chiang’s KMT government and in August 1945 deployed troops to the Northeast and annihilated nearly a million soldiers from Japan’s Kwantung Army.

Prior to the end of the Second World War in 1945, Chiang signed the Sino‑Soviet Treaty of Friendship and Alliance with the Soviet Union. This treaty was later replaced by the Sino-Soviet Treaty of Friendship, Alliance and Mutual Assistance that was signed between the Soviet Union and Mao Zedong, along with the New China that he led, after Chiang lost the civil war. China gained a lot of military and economic assistance from this treaty.

Apart from providing China’s People’s Volunteer Army with over 88 military divisions, the Soviet Union also provided assistance for over 150 of China’s large-scale industrial projects by way of funding, blueprints and engineers who taught the Chinese how to build and manage these projects. The assistance rendered by the Soviet Union was of an unprecedented scale and China was mostly on the receiving end. Without the Soviet Union’s help, China would not have been able to undergo industrial modernisation.

In the instances where China and Russia worked together in the past, China has always been in the subordinate position and was unhappy with it. But today, China and Russia each have their own strengths and are on an equal footing.

A marriage of convenience can be strong

Some people think that China and Russia will never become true allies because they have split up and patched up too many times. But on the flip side, we can also conclude that China and Russia are natural allies. Because they face the same enemy, even if the alliance between them breaks down, they can still overcome past grievances and come together again. The two countries share a border that is several thousand kilometres long, and have highly complementary economies. Their relationship would have endless potential if they cooperated with each other.

In the instances where China and Russia worked together in the past, China has always been in the subordinate position and was unhappy with it. But today, China and Russia each have their own strengths and are on an equal footing. The common threats they face at present include Japan and an even stronger America, which presents them the need to join forces. However, it is also the case that some Chinese are wary of Russia and vice versa.

This is a problem that any two allied countries in the world would face. As long as external threats and pressures are sufficiently large, these problems can be overcome. Once Chinese and Russian leaders recognise the benefits of a China-Russia alliance and band together, they can become a force that upholds the security of their respective countries and world peace. And if both countries become allies, the world’s power structure will undergo earth-shattering changes.

Related: Why China and Russia should join forces now | Can Biden 'set up' the US and Russia against China? | The real reset of US-Russia relations has begun? | Extension of China-Russia friendship treaty does not mean ties are solid | [Photo story] Russo-Japanese War: A war fought on Chinese soil and its hard lessons