Why Chinese youths are not spending 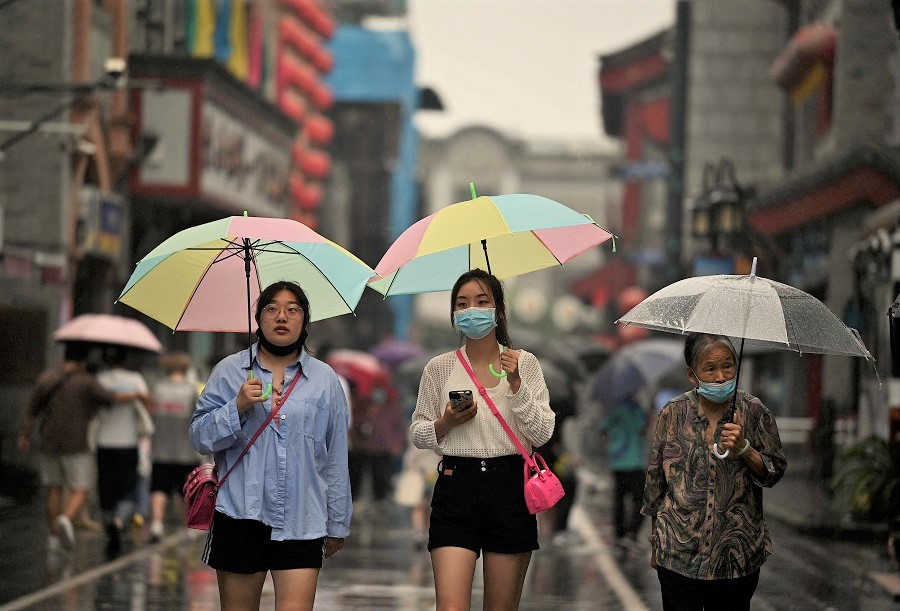 People use umbrellas as they walk along Qianmen street in Beijing, China, on 18 August 2022. (Noel Celis/AFP)

Grace Chong - 30 January 2023
In the last of a six-part series on hiking in Hong Kong, cultural historian Cheng Pei-kai shares the wonders of Hong Kong’s hiking trails. As he rediscovers the hidden splendour of Ma On Shan on a difficult hike, he marvels at the ingenuity of the gods, keeping the pristine away from the evil world. Only the most determined will glimpse unparalleled beauty.
Read more
Translated by Grace Chong on 17 October 2022

Chinese netizens recently joked that a decade ago, you would be the object of envy if you spent 3,000 RMB (US$420) on a pair of shoes from an overseas personal shopper. To win as much attention these days, you'd have to say: "I picked these up for 30 RMB from Taobao, they’re comfy and last forever!"

Amid a “money-saving” trend in China, social media content on saving and teaching people how to live simply has mushroomed over the past two years. This genre of posts has gradually usurped those advocating decadent lifestyles as the most popular content online. The viral slogan “Restrain yourself and make money” (人间清醒, 搞钱要紧) has become a motto for Chinese youths, and is even printed on T-shirts.

... the tense social atmosphere has greatly affected her spending decisions.

Several anti-consumerism groups mostly started after the Covid-19 outbreak in 2020 have appeared on the Chinese social networking service Douban. These include “If We Can Gain Happiness By Not Spending” (如果我们可以通过不消费获得快乐), “The Institute of Low Consumption” (低消费研究所) and “Resist Consumerism Effectively” (消费主义有效抵抗). The group “Do Not Buy; We are the Consumerism Retrogrades” (不要买 消费主义逆行者) in particular has attracted over 300,000 members since its launch in late 2020.

The sole aim of these groups is to discourage their members from spending.

The humorous and fun online content belies a profound change in Chinese youths’ perception of money — under the shadow of the pandemic and the grim economic situation and employment prospects, Chinese youths are now more cautious about spending and more inclined to save money.

Before the pandemic, 28-year-old Li Yue, an administrative staff at a foreign enterprise, would meet her friends almost every week, spending at least 500 RMB each time. She would also buy the latest beauty products online without a qualm. However, since the pandemic, Li has not kept up with beauty product trends.

Li told Zaobao that while the pandemic has not made a dent in her income, the tense social atmosphere has greatly affected her spending decisions. She used to spend up to 1,000 to 2,000 RMB a month mostly on cosmetics and clothes, and nearly 100 RMB daily on food from restaurants. Since the pandemic, she saves roughly 2,000 RMB a month by not keeping up with beauty and fashion trends, and cooking at least one meal a day.

Li naturally started saving money because of the various Covid-related restrictions such as lockdowns and work-from-home arrangements. The change in lifestyle made her realise that she had been making unnecessary purchases in the past, while the uncertainties brought about by the pandemic also highlighted the importance of saving money. Saving up thus gradually became a conscious choice, and a common conversational topic among young workers.

She said, “Last time, my friends and I used to discuss fashion and the latest trends. But now, we talk about the pandemic, employment, and how to save money… I recently read news about retrenchments, shrinking job vacancies and increased competition. Also, the salary increase after changing jobs may not be that high anymore, so I’m quite worried about my future.”

The younger generation has become one of the hardest hit groups in China’s grim economic situation. China’s National Bureau of Statistics reported that the urban unemployment rate for youths aged between 16 and 24 still remained high at 18.7% in August. The total retail sales of social consumer goods has also been weak this year, hitting a contraction of 11.1% year-on-year in April at one point, and only recovering to a growth of 5.4% year-on-year in August.

Analysts generally believe that China’s unwilling consumers will slow China’s economic recovery. As the pandemic enters its third year, Chinese consumer behaviour may have seen irreversible changes — even after officials relax anti-Covid measures, it is highly unlikely that a massive wave of “revenge spending” will occur as anticipated.

While Li admits that she and her friends still desire a luxurious lifestyle, the current reality has suppressed this desire. She believes that her consumption habits will marginally return to pre-pandemic days as soon as life gets back to normal. However, the pandemic has exposed life’s uncertainties and this sense of unease may not disappear completely and will continue to affect her future spending decisions.

Tan Gangqiang, head of a psychology consultation centre in Chongqing (重庆市协和心理顾问事务所), said that the current money-saving trend is a way in which people poke fun at themselves and stay calm amid the pandemic. Such behaviour has already become a zeitgeist and is no longer a temporary phenomenon.

Tan pointed out that the younger generation are trend followers who should be the most willing to spend. The change in their consumption attitude could trap the economy in a vicious cycle. When the younger generation have a lower income and are spending less, it would be more difficult to revitalise the economy and for enterprises to survive, which would go back to affecting youths’ income, resulting in a long-term impact.

This article was first published in Lianhe Zaobao as “疫情下就业景气低迷 中国年轻人减少消费省钱成新风潮”.

Related: China's 'little emperors' of the 1980s are now the most burdened generation | China's exorbitant cost of zero-Covid | Post-00s youths want to rewrite workplace norms in China | Depression among China's college students reveals anxieties about jobs and Covid | It takes a mountain of effort to tell the truth about China's economy | China wants to reverse its high abortion rate with pro-birth policies, and young women are not happy | 200 million Chinese are in flexible employment. Is this their choice?