Women leaders in China: Why people are more interested in their love affairs

Chinese academic Lorna Wei notes that there have been several strong and powerful women throughout China’s history, but their political achievements have often been dwarfed by stories of their love lives. It’s not more women leaders China needs, but better ways of telling their stories, she says. 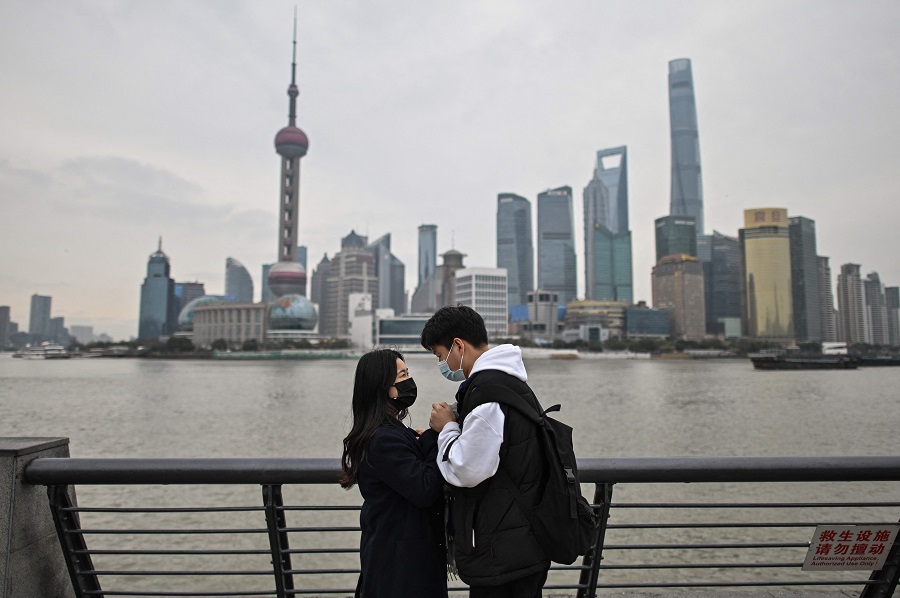 In this photo taken on 5 March 2021, a couple visits the promenade on the Bund along Huangpu River in Shanghai, China. (Hector Retamal/AFP)

Grace Chong - 30 January 2023
Amid ongoing tensions, a high-level visit by US Secretary of State Antony Blinken to China in the coming week shows hope for improved relations between the two economic powerhouses. Zaobao correspondent Yu Zeyuan notes that while the meeting may not produce practical results, it is a much needed exchange to manage and control China-US relations from worsening.
Read more
Translated by Grace Chong on 7 April 2021

Once upon a time, the Western fairy tale featured a beautiful princess who needed Mr Right to rescue her. Decades later, this clichéd plot has become a trend in Chinese TV series. Unlike the Western princess, the life story of the heroine is usually adapted from that of influential political figures such as Emperor Wu of Tang Dynasty, the first and the only female emperor in China; Queen Lv, the powerful leader of the Western Han Dynasty; and Empress Dowager Xiao of Liao Dynasty and so on. Their stories hit the big screen, and not surprisingly, all their great achievements are turned into platitudes — the innocent heroine reaches the apex of power because of the help she receives from men, especially her lovers.

The political legends of female leaders are always overshadowed by stories of their love affairs, reflecting the deep-rooted beliefs about gender that women belong to the private sphere. People reinterpret the life stories of these women by highlighting their dependence on men, indirectly erasing their political influence. Most female leaders in Chinese history are severely stigmatised by or attacked through the idiom “the hen cackles in the morning louder than the cock’s crowing” (牝鸡司晨), which sounds a warning about a woman trying to usurp a man's power.

Vying for leadership is often regarded as a man’s game, while women usually have a subordinate status. Women who obtain higher positions cannot escape the fate of being labelled as unfeminine. The adjectives ‘tough’, ‘decisive’, ‘confident’ and ‘powerful’ are gendered in most Asian countries as they are positive when describing male leaders, but sarcastic or negative when used on female leaders. But there was an era in Chinese history when tough women were celebrated. In the early period of the People’s Republic of China (PRC), women were encouraged to participate in industrial production and political reforms. The long-sustained Confucian ideology that women belonged to the domestic space was shattered as Chairman Mao’s powerful slogan stated: “Women can hold up half of the sky (妇女能顶半边天).” Life stories of women in the 1950s were studied, and their contributions to the construction of new China as activists, farmers, models, and labourers were recognised. “Iron girls” (铁姑娘) were particularly celebrated. These iron girls actively responded to the national call for participation in industry and construction. They were strong and powerful and had a significant influence on contemporary Chinese history.

Though Deng’s achievements are sometimes eclipsed by her love story with her husband, Premier Zhou Enlai, she is still the cornerstone of women’s liberation in socialist China.

Devoted to a cause

Many female leaders devoted themselves to the cause of women’s liberation under socialist reform. Deng Yingchao (邓颖超), the first president of the All-China Women’s Federation, emphasised the importance of free choice in marriage, and participated in drafting the first Marriage Law in the PRC, abolishing polygamous and arranged marriages. She also encouraged women to actively participate in political affairs and called on Chinese women to work hard in the public sphere and be the independent and confident “New Woman” with self-respect and self-reliance. Though Deng’s achievements are sometimes eclipsed by her love story with her husband, Premier Zhou Enlai, she is still the cornerstone of women’s liberation in socialist China.

Another female leader respected nationwide is Shen Jilan (申纪兰) who was awarded the Medal of the Republic, China’s highest honour. She actively defended women’s labour rights and advocated enshrining “equal pay for equal work” in the constitution. Shen also made great contributions to the economic development of agriculture and helped to alleviate poverty in rural areas. Her mantra of “equal pay for equal work” has benefited numerous Chinese women and empowered them with economic independence.

Hua Chunying (华春莹), the most popular female diplomat, is the current director-general of the Information Department of the Ministry of Foreign Affairs, PRC. Many people are impressed by her witty remarks on foreign affairs at press conferences, and she is only the fifth female spokesperson that China has had. Hua is an example of women wielding power in politics without men’s help.

Born to be outstanding

Modern women are exerting a greater influence in various fields. Chen Wei (陈薇) was given the national honorary title of “People’s Hero” in 2020 due to her scientific research on the Covid-19 vaccine. She and Tu Youyou (屠呦呦), China’s first mainland Chinese Nobel Prize winner in a scientific category, have demolished the belief that women are incompetent in science. Zhang Guimei (张桂梅), the principal of Lijiang Huaping Girls’ Senior High School, was awarded ‘Role Model of the Times’ and was on the list of the top ten persons who moved China in 2020 because of her work in providing Chinese rural girls with opportunities for free education. These famous remarks of hers are also an inspiration to rural girls:

I am born to be a mountain, not a stream,

and I want to look down on the top of mountains into the banal valleys.

I am born to be an outstanding one, not the ordinary,

and I stand on the shoulders of the great and despise the humble coward.

It is highly possible that modern female leaders in modern China will become the heroines of love TV series decades later.

These words are also the inner voice of Chinese women.

Since ancient times, there have been numerous great women in China, but their stories have all been transformed into absurd romantic ones. It is highly possible that modern female leaders in modern China will become the heroines of love TV series decades later. How to balance family and career is always a question that only women have to answer. Following social expectation means there is less devotion to one’s career, which in turn legitimates the saying that “women cannot be competent leaders”. On the other hand, if they do the contrary, they are irritated all the time when they hear the warning that “the hen cackles in the morning louder than the cocks crowing”. Our world does not lack great female leaders, but we do need a gender-neutral way to pass down their stories.

Related: Tang dynasty's Wu Zetian: Was she a wise emperor or did she ruin the country? | A Chinese woman's status and the one-child policy | Portrayal of women in Chinese dramas getting more westernised? | Chinese women in the 21st century: Finding happiness and meaning in life | China's grassroots civil servant and her story battling the Covid-19 pandemic