Did PLA fire new missiles over Biden's statement on Taiwan?

The People’s Liberation Army launched two new missiles over the weekend while conducting joint live-fire assault drills in multiple locations near Taiwan. Analysts say that these may be flashes of their trump card to ward off the US and other opponents against conflict in the Taiwan Strait. Zaobao correspondent Yu Zeyuan has the details. 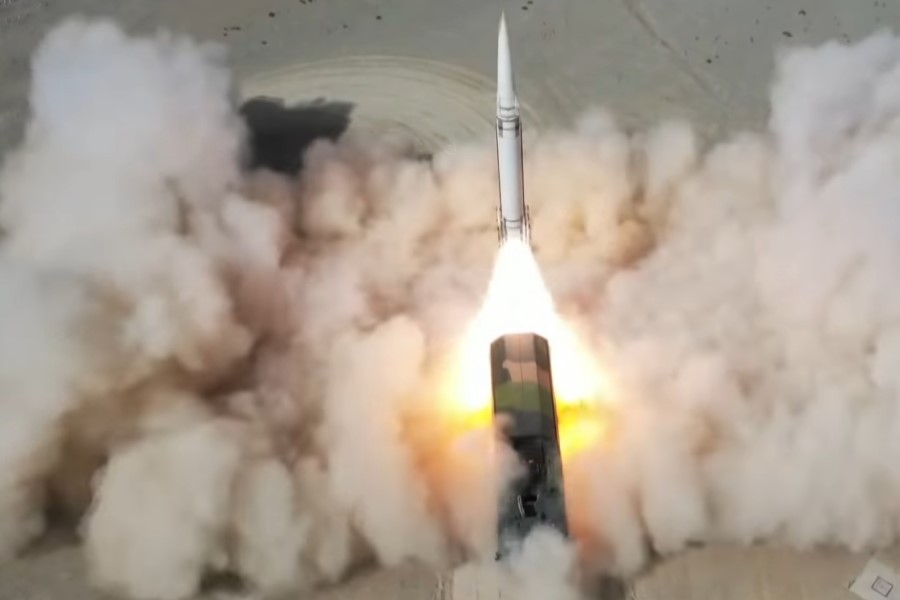 A screen grab from the video by CCTV, showing the launch of the new missile. (Screen grab/CCTV)

Candice Chan - 30 January 2023
A mall in Shenzhen came under fire for putting up white lanterns with black text as part of its Chinese New Year decorations, while an “ugly” rabbit-shaped light decoration was removed from another mall in Chongqing. Academic Zhang Tiankan muses on tradition and innovation, and the evolution of traditional decorations.
Read more
Translated by Candice Chan on 23 August 2021

On 21 August, news of the People's Liberation Army (PLA) Rocket Force launching two new conventional short-range missiles made it to the top of China’s online news searches. Military observers assessed that these missiles would be a trump card against mainland China’s opponents in any future battle in the Taiwan Strait.

The same day, mainland state media such as CCTV and The Voice of China under China National Radio reported that the 1st Conventional Missile Brigade had launched two new missiles in the deserts in northwest China, accurately hitting well-protected "enemy" defence positions hundreds of kilometres away. The time needed to initiate the launch sequence was reduced by half, on receiving orders to fire.

PLA prepared in any fight over Taiwan Strait

According to the reports, the successful launches of these new missiles show that the PLA Rocket Force has made advancements in its new-type advanced warheads, and enhanced the capability of conventional missiles to strike with precision in different situations, paralysing key hostile nodes, adopting an integrated approach, and destroying "enemy" targets. It has significantly improved the combat readiness of its system.

The South China Morning Post quoted Macau-based military analyst Antony Wong Tong as saying the missiles might be a new variant of the DF-15 ballistic missile family, either DF-15B or DF-15C. The DF15-B has a range of up to 800km, while the DF-15C has a range of 700 km and can carry deep-penetration warheads to attack underground bunkers and facilities.

Some Chinese military academics also said the CCTV footage shows that the new missiles seem to be the DF-15B, while the 1st Conventional Missile Brigade of the PLA Rocket Force was the first brigade to be fitted with the DF-15B missile.

The DF-15B is an upgraded variant of the DF-15 missile family. It is China’s first short-range precision-guided missile, with an accuracy of up to 30 metres CEP (circular error probable). However, the DF-15B was unveiled in 1999 at the 50th anniversary of the founding of the People’s Republic of China, and is not “new”. And so, the “new” missile announced in the state media is probably an upgraded variant of the DF-15B, or the DF-15C.

Once war erupts in the Taiwan Strait, other than attacking important “hard targets” across the strait, the PLA Rocket Force would destroy the opponent’s key communication nodes and seize control of its communications system, thereby aiding various mainland Chinese forces in conducting fire and cross-sea assaults against Taiwan.

In any case, mature technology is used on the missile bodies, and the only thing “new” about them is that they carry new-type advanced warheads. That the missiles accurately hit well-protected "enemy" defence positions hundreds of kilometres away shows that they can overcome complex electromagnetic interference as well as the defences of US Patriot missiles; while paralysing opponents’ key communication nodes shows that the missiles can be fitted with precision-guided anti-radiation, electromagnetic, or deep-penetration warheads.

Key communication nodes refer to systems including communication radar, data analysis, command, and control — the key parts of modern warfare. Once war erupts in the Taiwan Strait, other than attacking important “hard targets” across the strait, the PLA Rocket Force would destroy the opponent’s key communication nodes and seize control of its communications system, thereby aiding various mainland Chinese forces in conducting fire and cross-sea assaults against Taiwan.

Mainland Chinese naval expert Wang Yunfei thinks that since the PLA Rocket Force tested new missiles when the PLA Eastern Theater Command was also conducting joint live-fire assault drills in multiple locations near Taiwan, they can be seen as part of a joint drill across multiple service branches although they were held in different locations. This is the first time mainland Chinese media has released training activities of the PLA Rocket Force in seizing control of the opponent’s communications system, demonstrating the fact that the PLA is accelerating preparations for a military confrontation against Taiwan independence.

The US’s possible shift away from ‘strategic ambiguity’

That mainland Chinese mainstream state media is reporting on the PLA Rocket Forces’ new missile launch in such a high-profile manner can also be seen as China’s response to US President Joe Biden’s recent “gaffe” about defending Taiwan.

Taiwanese media thinks that this implies that the US’s military intervention policy on the Taiwan Strait has officially shifted from “strategic ambiguity” to “strategic clarity”, and that the US has made it clear that it would defend Taiwan.

On 18 August US Eastern Time, in reference to US credibility taking a hit after its withdrawal from Afghanistan and the fact that mainland Chinese media seems to be telling Taiwan that they cannot expect Washington to defend the island, Biden said, “We made a sacred commitment to Article Five that if in fact anyone were to invade or take action against our NATO allies, we would respond. Same with Japan, same with South Korea, same with Taiwan.”

This is the first time since 1979 when China and the US established diplomatic relations that an American president has made a clear stance on military intervention in the Taiwan Strait. Taiwanese media thinks that this implies that the US’s military intervention policy on the Taiwan Strait has officially shifted from “strategic ambiguity” to “strategic clarity”, and that the US has made it clear that it would defend Taiwan.

Although senior officials in the US government clarified on 19 August that the US’s Taiwan policy remains unchanged, some in mainland China seem to think that Biden did not make a blunder but was actually testing the mainland’s red line on the Taiwan issue.

And such an analysis is reasonable. The Biden administration has recently been dealt a big blow by the situation in Afghanistan and became the target of domestic criticisms and international doubt. It needs to display a tough stance on the Taiwan issue to divert domestic accusations of its diplomatic capabilities and appease international allies.

However, by playing the Taiwan card amid the crisis-ridden situation in the Taiwan Strait, the US would further provoke mainland China and prompt the mainland to be even more determined and make further preparations to solve the Taiwan issue through non-peaceful means, as reflected in the high-profile reports of the PLA Rocket Force’s new trump card.

Related: 'Afghanistan today, Taiwan tomorrow’? | 30,000 US troops in Taiwan? | Taiwan is America's best asset against China, but for how long? | Peaceful or armed reunification: Are top Chinese advisers divided over Taiwan?