The importance of Russia in China's foreign relations

Russian academic Andrey Vinogradov surveys Russia-China relations from a historical perspective, concluding that despite past divergences in ideology, their relationship is a longstanding one built on pragmatism and strategic utility. Most significantly, in furthering its own interests, Russia is inadvertently acting as a foil for China amid increasingly tense US-China relations. In the current international milieu, it can even be said that an existential inseparability of Russian and Chinese security is being formed. 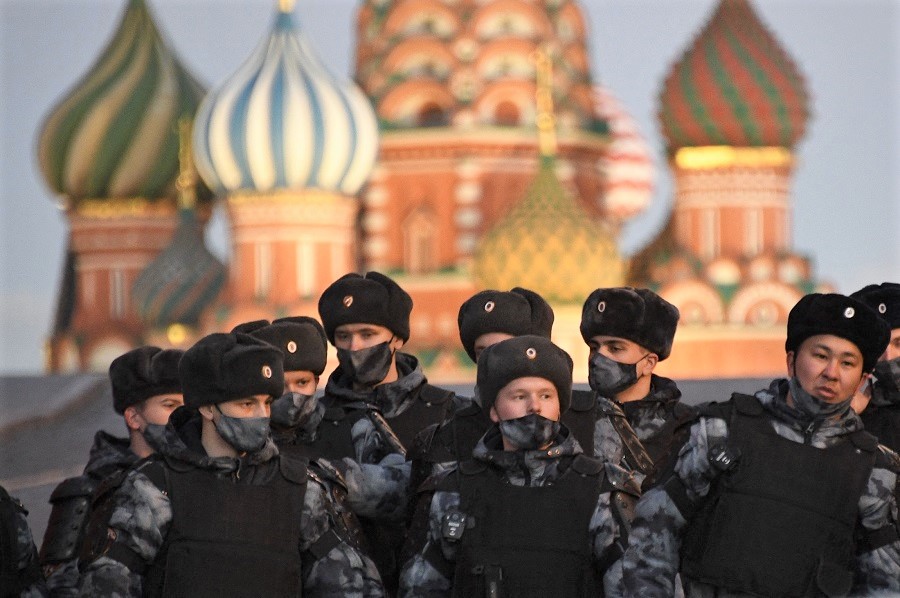 Police block Red Square ahead of a planned unsanctioned protest against Russia's invasion of Ukraine in central Moscow, Russia, on 24 February 2022. (Alexander Nemenov/AFP)

Grace Chong - 23 November 2022
US academic Wu Guo looks at the recent online furore over the mushrooming of state-run communal canteens in China and offers his views from the US. While providing food for the needy should be part of the state's responsibility, there should also be space for civil society, private enterprises and the public to play a role to create kind and healthy communities.
Read more
Translated by Grace Chong on 10 March 2022

The current character of Russian-Chinese relations is inextricably linked to history, especially to 1950 when the two socialist powers signed the Sino-Soviet Treaty of Friendship, Alliance and Mutual Assistance, a military-political alliance based on a common ideology. The ideological conflict that followed ten years later led to the rupture of allied relations, but could not break the deep internal connection derived from a common sociopolitical system. That is why in 1989, during Gorbachev's visit to Beijing, relations were normalised not only between states, but also between parties. However, the collapse of the USSR did not allow the world to see a new union between the two powers. If this happened, we would now be living in a different world.

The collapse of socialism in Eastern Europe and Russia left China face to face with the West, forcing it to accelerate market reforms to integrate with the world economy. Less noticeable but no less profound in consequence was the actual rejection of the principle of proletarian internationalism by the Chinese Communist Party. This became China’s foreign policy manifesto: to only have national goals and no ideologically dictated external obligations. After the beginning of its reforms, "peace and development" suited its interests and at the start of the 21st century, the idea of building "a community with a shared future for mankind" emphasised the inseparability of China and the world and the mutual benefits of such unity.

From the ideological to the pragmatic

Relations with Russia in these conditions, unburdened by ideological principles and allied obligations, were able to become purely pragmatic, dictated by mutual economic and political interests. The Russia-China Treaty of Good Neighbourliness and Friendly Cooperation of 2001 expressed the special character of their relationship in the post-bipolar world, and also their desire to avoid conflict and to cooperate with the US, while maintaining independence.

In solving its own problems, Russia unintentionally diverts US attention to itself. China, as a result is granted vitally important delays and finds itself outside the contours of direct confrontation.

However, in the following 20 years, China became an economic superpower and the very fact of its existence violated the post-1991 Pax Americana. Foreign policy documents under then President Donald Trump began to explicitly state that China was the main strategic adversary of the US. In this situation, China needed a powerful ally. It turned out that no one except Russia was up to the task.

Russia’s role in China's foreign policy strategy far exceeds its geoeconomic one, given that trade with Russia makes up only about 2% of China's trade turnover. Russia’s ability to counterbalance China's geopolitical rival secures the special nature of Russia’s relationship with China, even if this unwittingly makes it a factor and party to Sino-American relations. Due to its military capabilities, Russia is able to insert itself into the new bipolarity; by compensating for China’s lack of military power, Russia is able to restore to some extent its crucial role in world affairs.

Demonstrating its geopolitical ambitions time after time, Russia inadvertently serves an important function — drawing the US’s focus away from containing China. Having emerged from the distant bipolar past, it constantly challenges the West, as was the case in 2008 in Georgia, in 2014 in Crimea and in 2022 in Ukraine. In solving its own problems, Russia unintentionally diverts US attention to itself. China, as a result is granted vitally important delays and finds itself outside the contours of direct confrontation.

...a sense of the existential inseparability of Russian and Chinese security is being formed, and this, indeed, is much more significant than just a situational military-political alliance.

The inexorably impending bipolarity between China and the US, by virtue of its construct, suggests a delineation in most areas including ideology. The emerging ideological confrontation, a concept seemingly buried after the collapse of communism in the USSR, makes clear the fundamental differences between East and West. It also reiterates the internal unity of Russia and China and weakens or dispels mutual suspicions of a possible unilateral normalisation with the West. In the context of growing ideological confrontation, a sense of the existential inseparability of Russian and Chinese security is being formed, and this, indeed, is much more significant than just a situational military-political alliance.

In the context of the escalating international situation, Russia and China readily look to history and see in it the closeness of relations that would help them even now. However, for the Russian elites, further rapprochement with China is hampered by ideological differences.

Communist ideology, which used to unite several decades ago, now divides. Since 1991, Russia has proclaimed itself as a non-communist or even anti-communist state. State propaganda was aimed at promoting liberal and democratic values. In the mass consciousness, China is a communist state. It takes time for mindsets to change and international tensions will do much to bring the two states closer. But major changes are happening in China. Modern China’s ideas about socialism are indeed very different from Soviet socialism without freedom of entrepreneurship, market economy etc, and is increasingly perceived in Russia as a model of successful development which Russian elites can also adopt. Besides, China is Russia’s only significant ally and deserves a favourable attitude in all respects.

Xi Jinping has made great efforts to form not only a new domestic and foreign policy, but also a new theory. It is far from accidental that the joint Russia-China statement of 4 February 2022 begins with a discourse on democracy. Starting not with politics and economics, but with ideology, the parties showed the true meaning of extending Russia and China’s friendship treaty in June 2021, and filling it with new content and laying a new foundation for cooperation that runs deeper and stronger than economic relations and geopolitical interests.

The Western countries are playing a huge role in bringing them together by “institutionalising the opponent” and pitting democracy against authoritarianism through vehicles such as the US-led Summit for Democracy. This re-ideologisation of international relations will only hasten the creation of a framework for cooperation between Russia and China on a new platform.

Taking a strategic perspective, the state of the world will be determined by the relations between the US and China, which are fundamentally different from previous relations between the US and the USSR. The arena of rivalry between China and the US will primarily be among Asian countries, just as the confrontation between the USSR and the US primarily affected the countries of Europe. Cultural factors will matter in terms of different worldviews in solving problems. For instance, we may see swift political acts taken in the West to resolve issues, but China may choose to bide its time. In the matter of Taiwan, it might even be ready to live for centuries respecting the status quo.

As long as the West considers Russia its immediate threat...it will not be able to start fighting its strategic threat — China.

For geopolitical and economic reasons, the US has always been ready for war. It is an important instrument of American foreign policy, which Washington has actively and effectively used throughout its history. Russia, for historical reasons, is not afraid of war. In the US-USSR bipolar world, these positions formed a single discourse that made it possible to conclude agreements to maintain strategic parity. This discourse in Russian-American relations persists to this day. The situation in Ukraine has shown that the US recognises Russian red lines.

In US relations with China, the situation is different. China has always avoided wars, preferring other foreign policy tools to protect its interests. While under what conditions a compromise with the US will be found is not yet clear, it is clear that the US has tested and will continue to test China for a forceful solution to problems in the region. The role of Russia in this matter is also of great importance.

As long as the West considers Russia its immediate threat, its geographical proximity being one of the reasons, it will not be able to start fighting its strategic threat — China. Under these conditions, China is interested, on the one hand in Russia retaining its strength, maintaining the viability of the economy and its defence capabilities, and on the other, in taking advantage of the ongoing pause in order to prepare for the decisive stage of strategic confrontation.

Related: China’s alliance with Russia is solidifying | Russia and China in Southeast Asia: Pragmatic cooperation against US primacy | Fifty years after Nixon's visit, is China tilting back towards Russia? | Russia-Ukraine crisis: Can Russian aggression bring back the former glory of the Soviet Union? | Why China and Russia should join forces now