Elephants in the room: Why China's Two Sessions are a tad dull this year

While the annual Two Sessions are supposed to be a major event in China’s calendar, Zaobao correspondent Yang Danxu notes that this year’s meetings seem even more staid than usual because of the elephants in the room, not least Ukraine. Coupled with delegates delivering public lines, China’s deliberative process remains more than a little opaque despite the media attention. 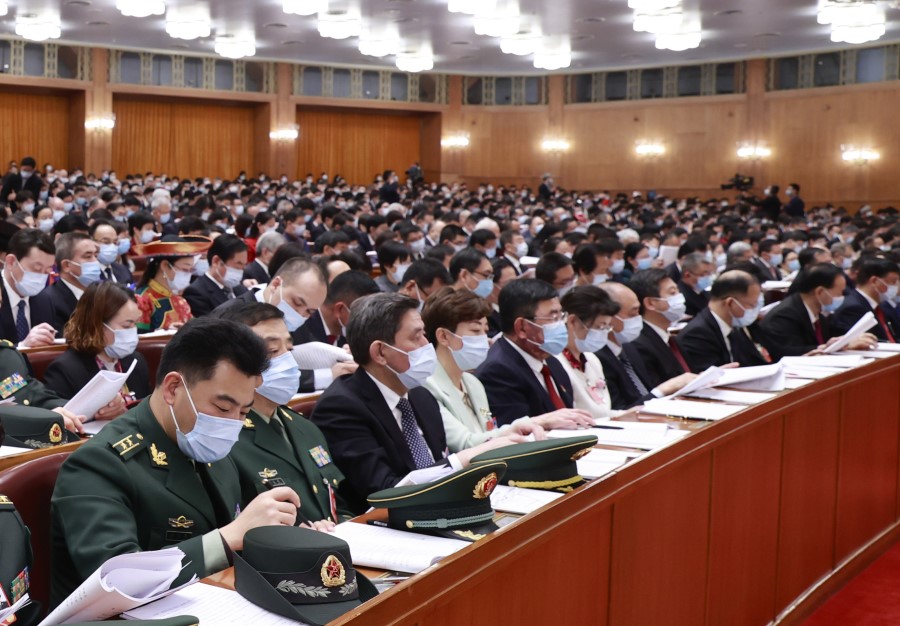 Attendees at the Two Sessions meeting in the Great Hall of the People, Beijing, 8 March 2022. (CNS)

Candice Chan - 30 January 2023
A mall in Shenzhen came under fire for putting up white lanterns with black text as part of its Chinese New Year decorations, while an “ugly” rabbit-shaped light decoration was removed from another mall in Chongqing. Academic Zhang Tiankan muses on tradition and innovation, and the evolution of traditional decorations.
Read more
Translated by Candice Chan on 9 March 2022

China’s annual Two Sessions — meetings of the Chinese People’s Political Consultative Conference (CPPCC) and the National People’s Congress (NPC) — are in their sixth day, and this big event in Chinese political life is turning out to be a little boring.

Due to the pandemic, since 2020, the Two Sessions have been significantly shortened, with the meetings held in a “closed loop”. This year is no exception and to top it off, quite a few of my fellow journalists seem unenthusiastic. Someone quipped: “The more interested you are in something, the more it is not discussed.”

So, what is everyone interested in? Ukraine, of course. For nearly two weeks, the Russia-Ukraine war has been a hot topic on China’s internet. While interest has cooled down in the past few days, related topics still make it to the list of top searches. There are both pro-Russia and pro-Ukraine supporters among Chinese netizens, with plenty of arguments on Weibo and WeChat.

Ukraine, the elephant in the room

The fighting is happening in Europe and China is not a direct participant. But as one of the most influential countries in the world right now, there is a lot of attention on Beijing’s position, as well as the impact that Ukraine-spurred geopolitical changes will have on China. Not surprisingly, at a Two Sessions press conference on 7 March featuring State Councilor and Foreign Minister Wang Yi, Ukraine was the focus.

Wang took many questions, including those asking why China did not call Russia’s military operation an “invasion” and whether China was worried that its refusal to condemn Russia would diminish its international standing, as well as about China’s relations with Russia and Europe amid the Ukraine crisis.

However, other than at this press conference, the hottest geopolitical event of the moment seems to have become the elephant in the room at the Two Sessions.

Among other topics not discussed at the Two Sessions was the case of the “chained woman”, a recent news highlight in China.

Diplomatic issues have never really been the focus of the Two Sessions, but there is no denying that with the Russia-Ukraine war where it is now, it is closely tied to every country and it is difficult for China to stay removed. The war has led to a jump in energy and commodity prices — will it impact China’s economy and bring greater worries even as it already faces growth pressures? Will the sanctions on Russia affect China, and how will China respond? And how will China handle growing geopolitical risks?

It is difficult for outsiders to tell whether the central and local government officials and military persons, or the entrepreneurs and academics approved by the system discussed the issue during closed-door discussions, or debated in private conversations about supporting Russia or Ukraine. But from the public reports in Chinese media, everyone seems to have forgotten about the overhanging cloud of the Ukraine war.

Among other topics not discussed at the Two Sessions was the case of the “chained woman”, a recent news highlight in China. At the start of the year, an incident involving a chained woman in Feng county, Jiangsu province caused a stir, pushing public distrust of government credibility to a high. An intense debate on women’s rights and human trafficking also ensued.

Nonetheless, officials did address the issue of women trafficking at the Two Sessions. The government work report delivered by Premier Li Keqiang reaffirmed the government’s determination to crack down on women and children trafficking, and in a meeting of national political advisers from the agriculture, welfare and social security sectors, Chinese Communist Party General Secretary Xi Jinping also demanded a crackdown on illegal and criminal acts against women and children in accordance with law. Both the work reports of the Supreme People’s Court and the Supreme People’s Procuratorate also vowed to “strictly punish” or impose “severe punishment” on such crimes.

But the case of the “chained mother of eight children” was not mentioned again. Apart from stating the official stance of the higher-ups, state media reports of the Two Sessions did not mention the incident or the issues that it has raised, such as government credibility, and whether they were much discussed by the delegates of the Two Sessions. It is believed that officials did not want to revive the hot topic during the Two Sessions.

...delegates repeated that the "dynamic zero-Covid" policy suited the country’s national conditions and was the most effective and responsible approach.

In addition, the direction of China’s anti-epidemic policy, which the outside world is concerned with, has yet to become a hot topic during the Two Sessions. When answering questions from the media, delegates repeated that the “dynamic zero-Covid” policy suited the country’s national conditions and was the most effective and responsible approach. But behind closed doors, it is not known whether the current anti-epidemic policy was discussed or whether there were differing views among the delegates.

To the outside world, the Two Sessions is more like a one-way declaration and proclamation of highly consistent positions.

The higher-ups in the Chinese government see the Two Sessions as a serious forum for deliberations. Thus it has tried to blunt discordant views and even in the years prior to the pandemic, room for discussion at the Two Sessions has been shrinking, with delegates increasingly toeing the line.

The gossip and “drama” seen at Two Sessions of the past are almost non-existent, while voices raising provocative views are becoming softer. Instead, delegates are merely going through the motions and listening to reports now. To the outside world, the Two Sessions is more like a one-way declaration and proclamation of highly consistent positions.

The officials’ focus on stability ahead of the 20th Party Congress has also made the Two Sessions somewhat more dull. Stabilising economic growth and the overall social situation are the top priorities of China’s higher-ups this year. It is likely that any voice that may be controversial or contrary to the stability mantra will not be heard on public occasions.

Under various political constraints, delegates of the Two Sessions consciously avoid controversy and are more careful about what they say. In this sense, it is not surprising that Chinese media are afraid to set an agenda or take advantage of the Two Sessions to create catchy topics.

Under China’s unique political environment, one rarely gets a chance to take a close look at the thought process and behaviour of Chinese policymakers. The Two Sessions is one of those rare windows to the process. But it is worrying that with the pandemic situation, the public opinion milieu and the political atmosphere, even if this window is not shut, there is alas nothing much to see.

Related: Stability and growth: Two Sessions' government work report spells out what China wants | A Singaporean in China: Can there be justice for trafficked women sold as wives? | Did China miscalculate the Ukraine war? | Is China ready to live with the virus?