Was the Tang dynasty the golden era of women's rights in China?

Just as women in China today, especially rural women, have to contend with male favouritism and diminished rights, women in the Tang dynasty were also restricted by rules and social practices, even if the era in which female emperor Wu Zetian ruled was thought to be the golden era of women’s rights. 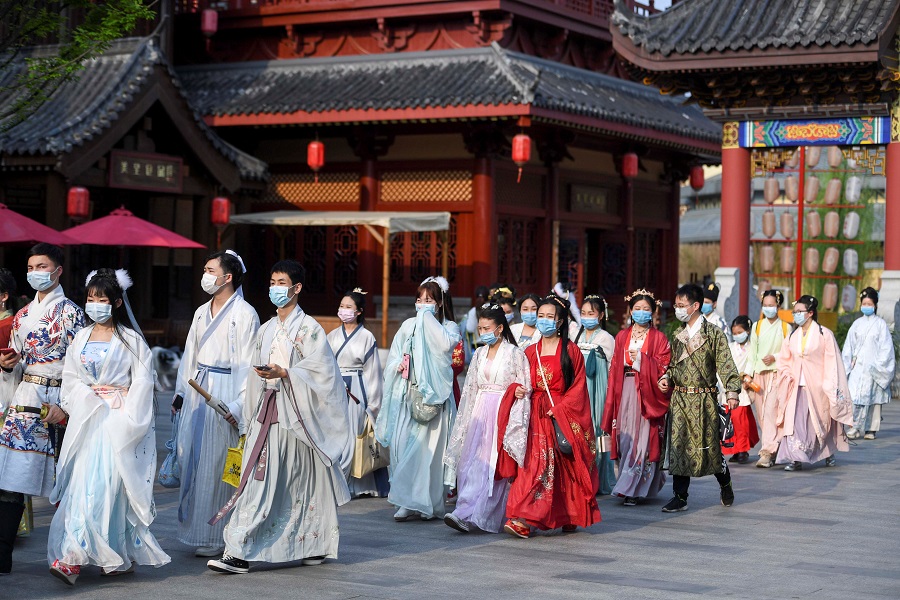 Grace Chong - 12 May 2022
Teo Han Wue laments that we are not doing enough to remember the remarkable contributions that Singapore’s pioneers of the arts have made. Singapore’s early artists and theatre practitioners were the avant-garde who went beyond the tried and tested in China or elsewhere. If we don’t remember our past achievements, how can we be inspired to produce greater things in the future?
Read more
Translated by Grace Chong on 8 December 2021

If there is a time machine, which dynasty do you want to travel back to? Most Chinese women would say the Tang dynasty because it was women-friendly: the free social atmosphere then and the reign of China’s only female emperor, Wu Zetian, has created such a fantasy of woman power in that era.

The famous Tang dynasty female poet Yu Xuanji also inspired many women to be independent in relationships; her famous line “You’ll find a man as excellent as Song Yu, so there is no need to resent Wang Chang” (自能窥宋玉, 何必恨王昌) encouraged women to always move on. (NB: Song Yu was a writer at the court of Chu during China’s Warring States period and was known as one of the most handsome men in Chinese ancient history. Wang Chang of the Wei-Jin dynasties was also known for his good looks.)

Tang women of feudal nobles had the right to sexual freedom.

Greater freedoms for women in the Tang dynasty

Women in the Tang dynasty might have had the happiest time compared to women of other eras in male-superior feudal China. As illustrated in the Old Book of the Tang Dynasty, women were not required to wear long dresses to cover their bodies and faces, and they could dress in men’s clothes as well. The lax requirements on clothing gave women more opportunities to participate in public activities. Their active participation in the agriculture, handicraft, textile manufacture and service industries contributed to taxes paid to the central court.

Moreover, Tang women did not have to follow the strict requirements on staying chaste after their husbands passed away. In order to echo the call for reproduction, Tang women were encouraged to remarry and give birth. Divorced women were blessed rather than stigmatised, as seen in divorce agreement relics unearthed in Dunhuang which said to the effect that the man wished that the woman would have a bright new life and excellent husband after divorce. The man asked the woman not to hate him and sincerely wished that they would both have a better life after the divorce.

The Tang dynasty is also famous for numerous love affairs. Emperor Xuanzong of Tang, Li Longji, married his daughter-in-law Yang Yuhuan (also known as Yang Guifei). As for the women, Princess Gao Yang and Princess Tai Ping had many lovers. Emperor Wu Zetian had many handsome male companions. In a sense, Tang women of feudal nobles had the right to sexual freedom.

However, these privileges were enjoyed by noblewomen. In feudal China, class overrode gender: no matter how many rights women had during the Tang dynasty, they were still the second sex compared to men in the same class. Women’s contributions in public and domestic spheres were largely underestimated, and they had to rely on their fathers, husbands or sons.

There are three basic rights that are measures for gender equality: the right to inheritance, the right to work, and the right to receive an education. Obviously, Tang women did not possess these rights as men did. If there is a time machine, please think twice before you travel back to the Tang dynasty.

Modern China seems to be a utopia for Tang women as gender equality is written in the constitution. Unfortunately, it is not written in the minds of some Chinese people with a feudal and patriarchal mindset.

Though men and women have the same right of inheritance in law, they are not treated fairly in reality. In rural China, rural women do not have the right to inherit the land, so they have to rely on their fathers, husbands or sons in order to get the means of production, which is similar to the tricky position that ancient Chinese women held.

For urban women, if she is the only child, she is lucky enough to inherit her parents’ possessions. If not, parents prefer to invest in sons rather than daughters as it is a parental obligation to prepare and provide the house and bride price for their sons. Though the law has endowed men and women with equal rights, the feudal son-preference has not perished.

For grassroots Chinese women, they can neither enjoy the privilege of Tang noblewomen, nor that of only daughters in urban China.

With regard to the right to work, Chinese women are implicitly or explicitly discriminated against in the job market. Two recent policies make their situation even worse. The first one is the three-child policy. In the era of the one-child policy, employers were assured that women only need maternity leave once in their tenure. However, fearful of having to bear higher costs now in terms of more maternity leave, many employers have stopped recruiting female employees, which has an adverse impact on women’s right to work. What is worse, many provinces have implemented the policy of an extension of maternity leave for women only, which means that employers need to pay more for female employees as well. With these two policies that seemingly benefit women but actually disadvantage them, women would be relegated to the home again.

As for the equal right to education, the story of school principal Zhang Guimei tells of the inequality that exists. Zhang offers free education to rural girls, who are usually deprived of education by their parents. Rural parents normally keep their daughters at home to do the housework when they are young, and marry them off as soon as they reach the legal marriageable age. With the bride price gained through their daughters’ marriage, rural parents buy a house for their sons and pay the bride price for their daughters-in-law. Their differential treatment of sons and daughters is nothing different from parents in feudal China. For grassroots Chinese women, they can neither enjoy the privilege of Tang noblewomen, nor that of only daughters in urban China.

The imagined fancy past and the cruel present, continuously remind Chinese women to work harder and seize every opportunity to foster a better society that has gender equality. We don’t need to be grateful for things we should have been born with, such as the freedom in dressing, mate selection, sexual activity and jobs. We are supposed to enjoy all the basic rights that men already have. It is ridiculous to be nostalgic of the liberal Tang dynasty or count on men to give women more rights or opportunities now. God only helps those who help themselves.

Related: Tang dynasty's Wu Zetian: Was she a wise emperor or did she ruin the country? | Women leaders in China: Why people are more interested in their love affairs | Foot-binding in ancient China: When women fought against their genes to be beautiful | Why Chinese women are unwilling to give birth | No bride price, no marriage in China | A Chinese woman's status and the one-child policy